There is nothing worse than fumbling around in your pocket trying to find some small change to pay for a newspaper or a coffee. There is technology to transform the traditional payment model like banknotes, coins or credit card into online payment method which also be called e-wallet. As an innovative market leader, Alipay surpassed PayPal and turns Chinese people into a cashless society.

This article will conduct a critical analysis of Alipay in terms of the Internet development, social impact and economic effect. The first part of this article will outline the operation and functional services of Alipay, while the second part will examine the company’s historical development, regulatory loopholes (regulatory debacles) and challenges. And the rest of parts will illustrate the business model of Alipay and Internet ecology. Finally, it discusses the revolutionary Internet revolution of Alipay and looks forward to the future.

The alipay phenomenon and how it works

Alipay (Chinese: 支付宝) is the largest third-party mobile and online payment platform in the world which has been overtook PayPal in 2013. It’s a business segment of Chinese biggest online shopping site Taobao which is similar to Amazon and eBay (John, 2014). It’s a payment method similar to many other ” e-wallet” services, where individual users can store funds by credit cards or bank accounts to Alipay account and use online shopping on Taobao or process offline payments.

How Alipay works on mobile

People can use Alipay as a payment method to pay by mobile phone when offline shopping. Shoppers use their mobile devices (phones, tablets, etc.) to scan the QR code on the Alipay payment page. Merchants can receive money through Alipay, a third-party platform.

How Alipay works on desktop-to-mobile

Blue QR codes can be seen everywhere in China, whether in big shopping malls, supermarkets, diner or food stall. Merchants and people start to get used to such one-click payment methods. People can also top-up their mobile phone, repay credit card, pay utilities cost. Alipay provides a secure, simple and swift payment experience in people daily life. There are over 100 million daily transactions through Alipay  (Adyen, 2018).

The rise of Alipay

Since the beginning of online shopping, people haven’t adapted to this model, usually suspect each other on both sides is the deceiver, so that a lot of transaction between the seller and the buyer was unsuccessful. In order to reduce fraud problem between merchants and buyers, Taobao efforted to improve the consumption system. Initially, Taobao encouraged “online orders, offline transactions”, but this approach had great limitations. Then, Taobao CEO Tongyu Sun has developed a payment tool based on secured transactions. According to the following illustration shows, the concrete operation way of Alipay guarantee deal is to put money into a third-party bank account held. After receiving the payment information, Taobao notified the seller to deliver the goods. When buyers confirmed receipt of product and responded well, settlement party would transfer money to sellers. The Taobao team named the payment tool based on secured transactions as Alipay, which successfully solved the trust problem between merchants and buyers (Liu,2017).

The part of Alipay history

26/05/2011: Alipay has obtained the payment business license issued by the people’s bank of China, becoming the first companies with third-party payment certification in China mainland (Reuters, 2011).

2013: Alipay launched the financial product platform-Yu’ebao (Usman W,2014). And implemented the “ALL IN wireless” strategy, focusing on development of mobile terminals.

2017: The number of mobile users of Alipay has also increased greatly which were 520 million in China, or around 37 percent of the country’s population (China plus,2018).

Alibaba built real-time payment fraud prevention monitoring and management system based on big data processing and intelligent risk models, called CTU (Counter Terrorist Unit) (Chen et al., 2015). To score the risk of every deal by detecting multiple dimension, the grade is high, indicating that the risk coefficient is relatively high, so Alipay will require a second check to determine whether the account itself. Transactions are automatically closed if not validated which can prevent the losses to the users. The scoring factors include: account, equipment, location, behavior, relationship, preference, etc. This feature makes Alipay to be a security cashless payment which is different from the credit card that are easily stolen. On August 21, 2018, the security department of ant finance released that the delayed payment function is fully upgraded, the funds that are defrauded are expected to be recovered.

According to iResearch Consulting Group, Alipay has 54% compared to 40% for WeChat Pay in terms of market share (Harrison, 2018). The battle between these tow online payment system is often seen as the proxy war between Alibaba and Tencent which are tow internet giants in China (Charlie, 2017).

04/08/2018: Alipay has been issued a fine of 180,000 yuan (US$28,543) for misleading marketing information and improper collection and use of customer data by Hangzhou branch of the People’s Bank of China. Alipay has infractions on customer rights, product promotion, personal information protection (Asia times,2018).

01/03/2018: Alipay launched the personalized 2017 annual bill activity in its mobile app. But in the evening, some users found that there was a row in small font “I agree sesame service agreement “in the first page before checking the annual bill, checked by default state. This agreement involved that the user be allowed Alipay to share the their personal information with the third party and knew the risks. If didn’t notice, the users will agree with this agreement to unwittingly.

In terms of business model, it is the structure of a company operation (Mikhalkina & Cabantous, 2015). In the modern technology society, the e-commerce enriches the opportunities for network business development through multiple-access (Jia,2016). The business model has also changed from the traditional model gradually into intangible products which is focus on service (Jia,2016). According to the paper of OECD (2016), the role of a payment system should allow low cost, quick, secure, reliable and effective transaction between retailers and consumers (OECD, 2006). Alibaba is trying to implement such a service just right now which tends to make it easy to do business anywhere. Online and offline merchants or businesses can easily use the internet to reach its users and consumers and create the swift and secure deal (Schneider, 2017). The innovation of a business model is based on the normal mode (Afuah, 2014). Alipay first started service to C2C platform Taobao and B2C shopping platform Tmall. Retail services on the Internet are individually called B2C, which is as known as consumer-oriented e-commerce.B2C allows that merchants use both the direct and hosted integration model (Adyen,2018).

The B2C mode includes the logistics process delivering and the product to the customer these kinds of tangible products. Comparing to B2C, the model based on online and offline consumers’ services is O2O (Jia,2016). Online to Offline (O2O) can be seen as the integration of offline business opportunities with activities on the internet (Ma, 2016). The customers have an opportunity to be directed to offline products/services by online information or scanning QR code via mobile payment system. However, O2O has a major problem. The O2O entrepreneur cannot control the offline service quality. If the offline supervision is neglected, individuals would easily switch to other payment platforms or even loss the online trustiness of Alipay (Jia, 2016).

If third-party sites or platform use Alipay as a payment tool, need to pay the technical service fee.

There are a lot of cash in Alipay account before a week later to pay to the merchants. Alipay can take these temporary money for other investments.

Alibaba has created a complete ecological system, that holds an essential place in the day-to-day lives of the Chinese people (Schneider, 2017).

Below is a diagram of Alipay’s internet ecosystem:

How Alipay changed the way we use the Internet (Transformative Effect)

With the development of technology, mobile devices are not leaving, and e-commerce has entered people’s lives. People started using Alipay because of the massive amount of credit card fraud or they don’t want to bring cash and debit cards. Alipay is gradually becoming great all-in-one mobile tool (Liu, 2015). There are several reasons why Alipay is most popular in China. It changes the way we use the internet, it enhances the development of electronic commerce. People has used to this new payment and new shopping style. In the past, most Chinese people were willing to save their money in the Bank account. Or compared with westerners, Chinese people don’t like to use credit card to pay for the goods, because they think ahead of consumption is a kind of unwise behavior (Maruma, 2013). With the popularity of cashless payment, Alipay is gradually accepted as the preferred payment method in China society. In the street, the blue payment QR code can be seen everywhere. Even buskers start to display QR codes instead of laying a guitar case on the pavement. In addition, above also enumerates Alipay company made a lot of improvement and contribution to provide users with safe, easy to use and quick payment environment. to survive in the fierce competition and surviving in the fierce competition. These cultural and value drivers in addition to maintaining and improving the company itself, but also attracts more and more people use Alipay and trust it (Liu, 2015).

There is a forecast for the future turnover.

“In 2015 Chinese citizens transacted $1 trillion through mobile payments using QR codes. In 2017 it was $15.5 trillion. In 2020 it is forecast that Chinese consumers will transact $45 trillion through mobile payments, by which time the county will be pretty much cashless. They have gone from fledging to mainstream in two years and from fledgling to cashless in five years,” (Raconteur,2018) 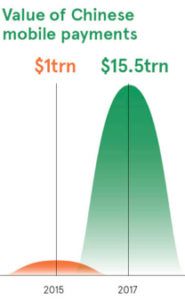 According to sustainable development of Alipay, Choi and Sun (2016) determined whether Alipay’s service quality factors are truly sustainable.

In the 21th century, the economic globalization is an obvious and indispensable trend.  The Chinese government launches a series of policies, actively promote e-commerce business, and encourages enterprises to do business with other nations over the world. Alipay is suitable for China’s economic situation which is working as the strong engine of economic growth in China. It’s ready to adapt to new business conditions on the basis of China’s “continental scale” economy in the future (Liu,2015).

Alipay gets licence to set up e-payment system. Reuters. Retried from

Charlie, L. (2017, Mar2). Everything You Need to Know about Alipay and WeChat Pay. A medium Corporation. Retrieved from https://medium.com/@charliecliu/everything-you-need-to-know-about-alipay-and-wechat-pay-2e5e6686d6dc

Harrison, J. (2018, Apr15). One photo shows that China is already in a cashless future. Business insider Australia. Retried from https://www.businessinsider.com.au/alipay-wechat-pay-china-mobile-payments-street-vendors-musicians-2018-5?r=US&IR=T

Schneider, F.(2017).The role of Alipay in commerce in China. The Journal of Asian studies.

Tap into the fast-growing Chinese market. Adyen. Retried from  https://www.adyen.com/payment-methods/alipay