Facebook is an American online social media business that is based in California. It is launched in 2004 and it currently has 2.2 billion monthly active users in 2018. It has a revenue of 40.653 billion USD in 2017 (Sheeran & Cummings, 2018). The operating income of the business has reached 20.203 billion USD. The business has a transformative effect on people’s understanding of the Internet and the economic, political, social and cultural worlds. It transformed people’s understanding since it increases the interconnectedness of people on the Internet. After the invention of Facebook, people are more dependent on the Internet to communicate with their friends, meet with new friends and share their lives with their friends (Sanne & Wiese, 2018). Facebook also changes the economic world as it shows how the huge amount of users can bring profits and economics to the business. It is dependent majorly on the advertisements income for profits and Facebook is almost totally free to users. In addition, it transfers the political worlds since many politicians began to use Facebook as channels to manage their public relations and manage their public images (Hansson, Wrangmo & Klaus, 2013). The Facebook changes the social and cultural worlds since it promotes online communication and promotes the development of an online community. The sub-cultural become developed in the online world.

Facebook was initially launched by Mark Zuckerberg on February 4, 2004, with his roommates and fellow Harvard College students: Chris Hughes, Dustin Moskovitz, Andrew McCollum, Eduardo Saverin. In the beginning, the membership of the websites is limited to the Harvard students. Later, the membership is expended to all students in the Ivy League schools, the higher education institutions, and Stanford University. It generally provided supports for students at other universities and finally to high school students. It allowed anyone who is larger than 13 years old can be allowed to register to become users of Facebook since 2006 (Vassilakaki & Garoufallou, 2015). The business came to such a transformative effect since it has a high level of influences on the public and its high level of popularity in its users. Facebook has 500 million users in July 2010. Moreover, half of its membership uses Facebook every day for an average of 34 minutes. In addition, Facebook became the second most accessed website in the US in 2011. Facebook has more than 1 billion active monthly users in 2012 and it has more than 600 million mobile users, 140 billion friends connections and 219 billion photo uploads (Baglione, Harcar & Spillan, 2017). In addition, an important reason for Facebook to reach a transformative effect is that it can be used in all devices, including mobile, tablet computers, laptops, and desktop computers. This significantly increases the interconnectivity of people and allows them to use Facebook on various kinds of devices. 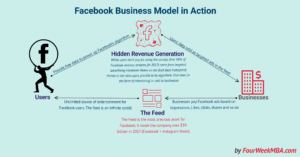 Facebook’s business model is to make profits from advertisements. Facebook has a lower clickthrough rate for advertisements in comparison with other major websites. However, considering a large number of users on Facebook, it is still attractive for businesses to make an advertisement on Facebook. Facebook does not charge users and this business model is conducive to attract a huge amount of new users and existing consumers. In addition, its business model can gain huge benefits from the economies of scales and network effects (Amalia & George, 2018). The huge amount of existing users on Facebook can help attract new users since these new users have friends and families who use Facebook. The huge amount of users is attractive to advertisers, which can provide profits for Facebook. Facebook has 2 million active advertisers in 2015. It reached 3 million active advertisers in 2016 and 70 percentages of them are from outside of US.

In addition, the firehouse access is another major source of revenue for Facebook. It sold the social media data to third parties. The user data can be used to analyze the behaviors and preferences of consumers.

Place in the industry Ecology

Facebook has many partners. It cooperates with the National Democratic Institute and International Republic Institute for news distribution outside the USA. The National Democratic Institute for International affair is a non-partisan and not for profit organization to work with partners in developing countries to improve the effectiveness of local democratic institutions (Lappas et al, 2018). The International Republican Institute is a not for profit organization to advance democracy and freedom around the world to help political parties to become more responsive and issue-based. In addition, Facebook also cooperated with Microsoft, Intel, Google, and many of their private and public organizations to make the Internet more affordable.

Facebook is under the regulation of many government institutions as its behaviors cover many areas. For example, it is under the regulation of Information Commissioner’s Office, a non-departmental public body in the UK, which directly reported to the Parliament to regulate actions related to the Privacy and Electronic Communications Regulation 2003 and Data Protection Act 1998 (Leung & Baloglu, 2015). Facebook is under its regulation for the users’ data security problems. Facebook is also under the regulation of the Federal Trade Commission in the USA, which is an independent agency with the major aims to protect the consumers and prevent and eliminate anticompetitive business practices. The behaviors of Facebook to sell users’ data to Cambridge violated the related legal regulations about customer protection in the USA. 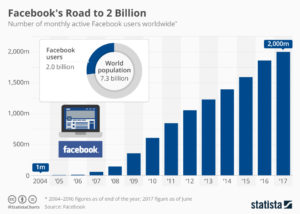 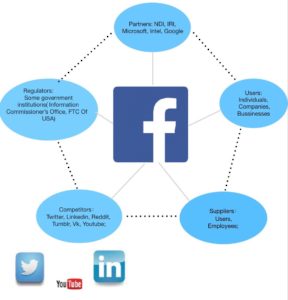 Firstly, Facebook makes the Internet to be a self-media on which that person can increase their influences on other people. Facebook changes the way that people are related socially. Traditionally, people are connected and linked with each other in their offline interactions, which are limited by the geological areas they are in and sometimes by their genders, cultural backgrounds, education backgrounds and so on (Shao, Ross & Grace, 2015). On the other side, Facebook breaks this limitation and allows people from different geological areas with different cultural backgrounds and education backgrounds to communicate with each other. It changes the way that people are related to each other. In this condition, it changes the way that people communicate with each other. Previously, people have to be dependent on the e-mails on the Internet to make communication (Sheeran & Cummings, 2018). Facebook allows people to share their contents and broadcast to other people and consequently engage others in their posts. Facebook allows people to participate in an atmosphere that can challenge traditional social restrictions. Moreover, it unites people who share similar interests and benefits. It allows the minority groups to unite and increase their influences. As a result, it changes the way that how people group together and communicates with each other. 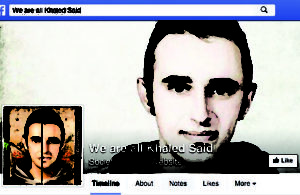 It changes the way that people relate politically and promote the political participation of people. For example, on January 14, 2011, Wael Ghoniem generated a Facebook page called “We are all Khaled Said”, to invite Egyptian people to participate in the peaceful demonstration on January 25. Facebook became the major tool for protesters to connect with each other, which forces Nazif, the Egyptian government of Prime Minister to ban Facebook on January 26 and later ban all Internet and mobile connections on January 28 (Sanne & Wiese, 2018). This was considered to play important roles in the 2011 Egyptian revolution, which finally forced Mubarak, the President to resign. In addition, in 2008, Facebook cooperated with Saint Anselm College and ABC to allow users to provide feedback about the ‘black to black’ Republican and Democratic Debates. Users on Facebook took active roles in debate groups on message questions, voter registrations and specific topics on Facebook (Mochon et al, 2017). More than 1 million users installed the application called the US Politics on Facebook to participate in the debate. The debate shows that young students and people have used Facebook as a powerful and new way to voice their opinions. Facebook generates huge influences on the youth voting rates and the involvement of youth generation in the 2008 election.

Facebook can stimulate economic development by providing a free public good, in which that all people can gain benefits from without reducing the amount that other people have access to. The Facebook also generates positive externalities (Lappas et al, 2018). It can generate huge spillover effects on mobile phone manufacturers and so on. Moreover, it can also bring benefits to providing huge user behavior data. It provides a platform for review, feedback, communication, social gaming and many other applications related to online activities. Facebook provides this open platform, which introduces a new business model for many businesses (Baglione, Harcar & Spillan, 2017). For example, Zynga Inc uses the platform to develop a new business model. It is a social game developer app and it is focused on providing games on mobile devices, and mobile gaming. It uses the large development platform of Facebook to connect the world with games.

Admittedly, Facebook has created a vast social network around the world, free, borderless, zero-distance and other features that make it highly regarded, and Facebook insists on making the product and user experience the first idea. It seems that a thriving social utopia has been presented to the public.

However, Facebook’s repeatedly exposed data breaches have forced the public to start thinking, and social media can be a violation of user privacy while bringing us many conveniences. Facebook is surrounded by public opinion, rooted in an irreconcilable contradiction between advertising profit patterns and user privacy. Facebook’s growing number of users means the amount of data Facebook has gradually grown to an astonishing number, a resource that can generate revenue for advertisers and Facebook itself. Facebook’s exposure to data breaches is about politics, business, and citizen privacy. For Facebook, it was a failure to balance the customers’ privacy and business interests. However, for the public, this is an in-depth consideration of social habits, if you are enjoying free convenience, then, you may be the product.

Facebook is an important part of the Internet transformation. It generates huge influences on the way people live, work and play. It changes the way that people communicate with each other since it allows people to share their lives and their opinions with others on the Internet. People can enjoy better connectedness with each other and break the traditional boundaries to make connections. It influences the way people work since it brings some new business models and generates more work opportunities for people. Moreover, it changes the entertainment methods of people by allowing people to communicate with each other online. People can gain enjoyment and entertainment through sharing their lives with other people and engaging in the contents posted by other people. It also provides more political participation opportunities and changes to normal people. However, it does bring with it some security and privacy issues.

Introduction Do you remember the last time you get the news information is from where? From the newspaper? Or from the website and social media? Nowadays, social media has become a part of our life […]

The past few decades had manifested the emerging of a new internet era and the revolution that the internet has brought to the everyday life of people. However, with the new technology being developed and having more […]

Why should we care about search engine?