Livestreaming has emerged as a relatively new way of engaging with content on the Internet, featuring better interactivity compared to other methods of experiencing content such as watching videos. In particular, Twitch has risen to become the dominant livestreaming platform, displacing its competitors and changing the way we view content online. This essay will take a look at how Twitch has reached its current status, how it interacts with other entities and its transformative impact on how we use the Internet.

Twitch was originally launched by Justin Kan and Emmett Shear in 2007 as Justin.tv, an online video broadcasting platform with different categories for different types of content, with an example stream shown below. The exceptional growth of the gaming category led to the creation of Twitch.tv in June 2011, a site dedicated to the livestreaming of games. Since then, the growth of Twitch has been spurred by the competitive eSports scene through the live broadcasting of tournaments and other competitive events, as well as livestreaming from individual broadcasters. In early 2018, Twitch pulled in close to a million concurrent viewers and is considered the largest livestreaming video service for video games. 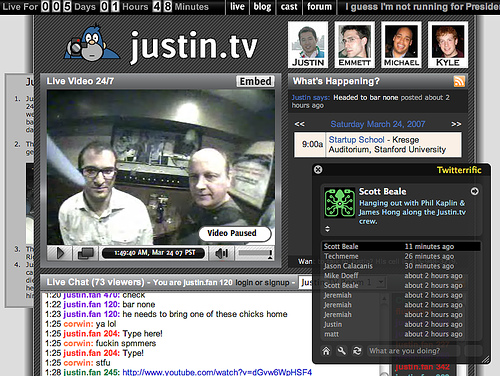 Twitch was acquired by Amazon for $970 million in August 2014 after a lengthy battle between Amazon and Youtube, which was owned by Google (Burroughs and Rama, 2015). Google backed out of the deal after its potential acquisition of Twitch was seen as anti-competitive. It currently operates as a wholly owned subsidiary of Amazon.com with Emmett Shear as CEO. This has enabled certain partnerships such as Twitch Prime, a service available to Amazon Prime subscribers which offers exclusive content for games as well as other bonuses on Twitch.

The business model of Twitch involves two methods: advertisements and subscriptions. It is worth considering that Twitch is a platform for hosting content creators; thus, a considerable share of profits must go to these content creators. The site is free to access and all streams may be viewed without requiring payment or registration, but ads may be played during streams which provides advertising revenue for both Twitch and the broadcaster, provided the broadcaster is partnered with Twitch i.e. they must average a certain number of viewers to be eligible (Nawal, 2018). These may be considered a less intrusive way of obtaining ad revenue as opposed to having ad banners all over the site. Ad revenue ranges from 2-5 USD for every 1000 impressions (Hamilton, Garretson and Kerne, 2014).

Viewers may also choose to subscribe to certain channels for a monthly fee with benefits including ad-free viewing of that particular channel, access to subscriber-only chat if the broadcaster chooses to activate this option and the ability to type exclusive emotes in any chatroom. Twitch takes a share of this fee through a rough ratio of 60/40 (e.g. for a $5/month subscription, Twitch will take $2 while the broadcaster receives $3), though this can range from 50/50 to 80/20. Twitch Prime enables a free subscription to a channel of your choice and operates on a similar basis as regular subscription in terms of revenue. Twitch also takes a share of revenue from donations to broadcasters, but not if the donations are through a third party such as PayPal.

Relations with other entities

Twitch interacts with a wide range of entities given its considerable popularity among millions of people. Its role as a subsidiary of Amazon allows it to access the resources at Amazon’s disposal and enables partnerships with other Amazon subsidiaries. For example, a significant number of ads on Twitch publicize products and services such as Amazon Prime and Audible, which is another subsidiary of Amazon. A subsidiary of Twitch is Curse, an operator of online gaming communities, through which Twitch provides users the means to act as an online game retailer. 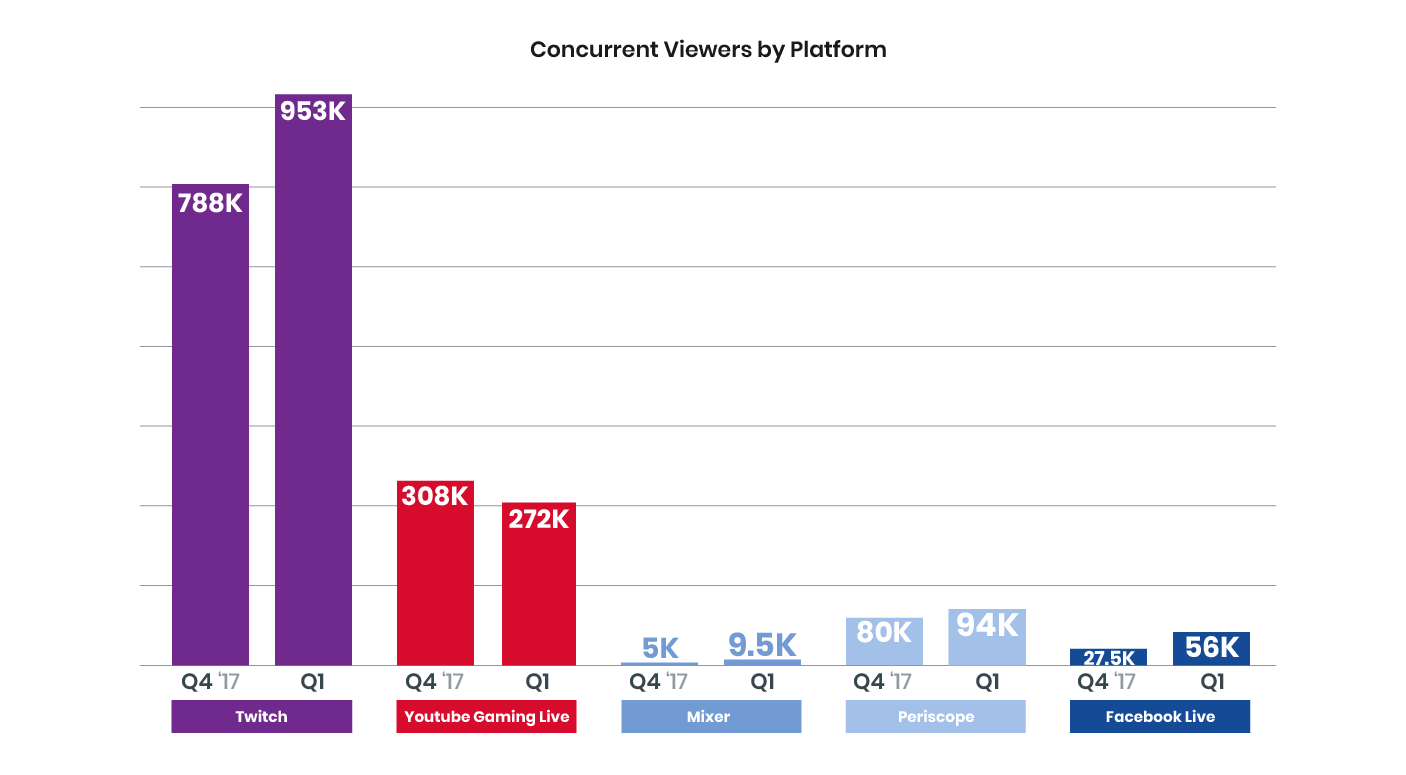 Content on Twitch is supplied by a number of parties. While individual streamers contribute the bulk of content available on Twitch nowadays, large gaming companies such as Blizzard have signed deals with Twitch and run their own streams on Twitch to broadcast eSports events. In terms of regulations, Twitch sets its own guidelines for broadcasters to follow; infringements of these terms of service can lead to temporary suspensions or a permanent ban off the site, though these happen very infrequently. The diagram below displays the internet ecology surrounding Twitch: 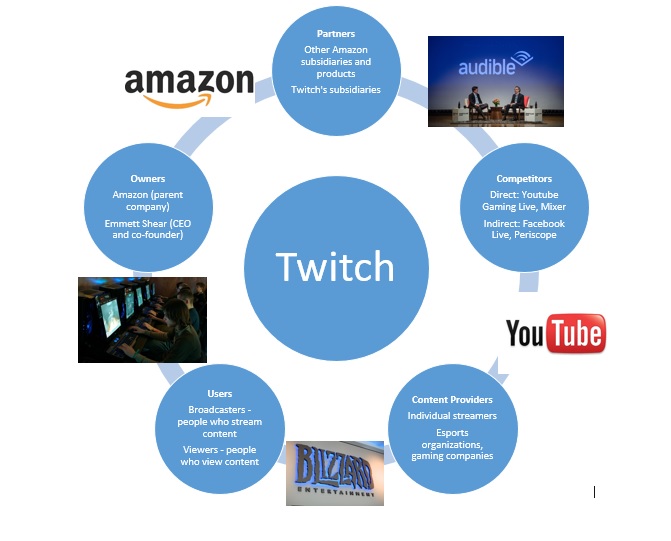 How has it transformed our usage of the Internet?

Twitch has had a significant impact on how users enjoy content online and has led to gaming becoming a form of entertainment based on spectating as opposed to an activity that is to be played (Deng et al., 2015). The growth of the site has allowed it to attract a wide audience, with Twitch accounting for 1.8% of peak traffic in the US in 2014. The growing success of Twitch can be drawn from many factors, most notably the unique ability to interact live with other viewers through the chat function (Nascimento et al., 2014). In most cases i.e. personal streams of individual players, viewers also have the capability of directly interacting with the broadcaster through the chat, as well as through third party applications such as Streamlabs which provide functions such as donation notifications on stream.

This real time interaction facilitates a new form of online socialization, allowing people to discuss or react to events as they are happening in contrast to after they have already happened. This common experience shared by multiple viewers and the content of streams leads to the formation of stream communities based on shared identities (Hamilton et al., 2014). It allows people to establish stronger connections with other like-minded people over the internet, fostering a stronger sense of group identity and belonging (Sjöblom and Hamari, 2017). Sjöblom and Hamari also found that users who subscribed to a channel had greater social integrative motivations, meaning they had a greater motivation to be involved and contribute in a community.

However, the high viewer count of certain streamers and channels that feature major tournaments i.e upwards of a 10,000, means that it is difficult to properly interact with others in the chat, let alone the broadcaster. This has led to what Ford et al. (2017) call ‘crowdspeak’ to describe the rapid discourse that occurs in the chatrooms of these large streams. Messages sent in these chatrooms compared to the chats of smaller streamers tended to:

Emotes were often used to convey emotions and meaning, furthering the shift from conversational speech towards crowdspeak given the limited number of unique emotes available and the restricted uses for such emotes. Despite the obvious chaos of a crowded chatroom and the negative impact on human behaviour these findings appear to entail, Ford et al. believes chatrooms with a large number of users develop their own unique set of practices carried out consistently and allowing them to communicate and function effectively, thus forming successful communities. This contrasts with the belief that large chats “destroy the potential for communities to form through participation”, as argued by Hamilton et al. (2014).

The success of online subscription based services such as Twitch Turbo and its successor Twitch Prime has led to its adoption by other entities such as EA. However, this could be part of a wider trend popularized by streaming services like Netflix, which charges a monthly fee for access to its content. Nevertheless, such a business model is becoming increasingly popular and successful in earning revenue; the recent skyrocketing of Amazon’s fortunes can at least be partly attributed to a similar surge in popularity of Twitch and in particular its Twitch Prime service.

Advances in the development of dedicated delivery solutions and bandwidth have allowed livestreaming to become more popular than ever, since livestreaming can now be accessed and utilized by a wider audience at reduced costs compared to before (Pires and Simon, 2014). This has also led to the growth of streaming services such as Netflix, forcing a shift from conventional methods of viewing media such as television, especially since technologies reserved for television such as adaptive bitrate streaming are now being used for livestreaming. Coupled with the act of socializing via online chatrooms, this has led to the gradual decline of the custom of viewing television with the family together as seen below, thus marking a significant change in behaviour especially among younger tech-savvy people. While Twitch is not only reason for this shift in behaviour, it is certainly a major contributor given it requires a greater level of engagement and commitment of time compared to watching videos on Youtube, which only takes up a set amount of time and where viewing is easier to regulate. 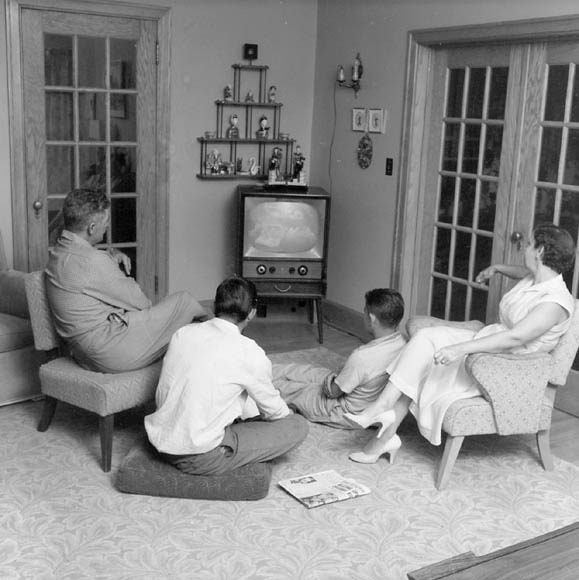 In summary, Twitch has led to a shift in how we communicate with others through its chat function and has presented itself as a replacement for more traditional methods of viewing media such as television. Thus, it has had profound effects on the way we behave both online and in real life. As technology continues to improve, we may see further transformations brought on by services such as Twitch.

BiblioArchives/LibraryArchives. (2003). The Schiefners watching television at home on the family farm, near Milestone, Saskatchewan, December 1956. Flickr. Retrieved from https://www.flickr.com/photos/lac-bac/12657103813

Hamilton, W. A., Garretson, O., & Kerne, A. (2014). Streaming on twitch: fostering participatory communities of play within live mixed media. In Proceedings of the SIGCHI Conference on Human Factors in Computing Systems (pp. 1315-1324). ACM.

Mac, R. (2014). Amazon Pounces On Twitch After Google Balks Due To Antitrust Concerns. Retrieved from https://www.forbes.com/sites/ryanmac/2014/08/25/amazon-pounces-on-twitch-after-google-balks-due-to-antitrust-concerns/#41a547cc5ab6

Nawal, A. (2018). Twitch.tv Business Model | How Does Twitch Make Money? Retrieved from https://www.feedough.com/twitch-tv-business-model-how-does-twitch-make-money/

Perez, S. (2018). Twitch solidifies its lead with viewership up 21% in Q1, while YouTube Gaming drops. Retrieved from https://techcrunch.com/2018/04/26/twitch-solidifies-its-lead-with-viewership-up-21-in-q1-while-youtube-gaming-drops/

About David Chen 2 Articles
Welcome to my profile. I am currently doing a Bachelor of Arts with Digital Cultures as a major. So far, I am enjoying the course and learning a lot about the internet.