Steam is a digital distribution platform for PC gaming. Players can buy, download, discuss, upload and share games and software on the platform. The platform developed by Valve Corporation for purchasing and playing videogames. 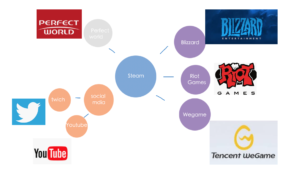 In this infographic, it is seen that the purple circles are the competitive companies with Steam. Blizzard is game companies own many famous games like overwatch. Riot Games is also a renowned game company hold the game which is one of the most famous game—legal of legend. Wegame is a new game platform created by Chinese famous internet company—Tencent. Wegame and Blizzard are both have the platform as Steam which provides a platform for both creators and players. Perfect world is a Chinese game company, and it cooperates with Steam. Social media, especially the video social media like twitch and YouTube provide a decisive advantage to steam which has many videos or lives about the game of Steam.

Firstly, the choice Steam provide for all kinds ability of consumers. It is a platform combined both paid games and free games (PCGamesN, 2018). The balance in the paid service is excellent. If the users enjoy high-quality games or the unique indie games, they could spend on it. If they think the free game is good enough, they could choose free games. Both paid game and free game have elastic consumption. For example, players could buy items or unlock new stories.

Secondly, the discount game is also an attractive point in steam. Steam provides a discount for the different match in specific time. That attractive the consumers who love this game but thought the price is high before. The brief period of discounting attracted more consumers. However, the politics of discount have changed since 2015(Grayson, 2015). It is an aspect should be thought over critically. Steam’s used promotions didn’t make consumers feel like its a dead, unused sale. Moreover, people enjoyed the activity and the community interaction, rather than just staring at their wish lists to see which games were on sale. For example, ‘daily deals’ is a daily promotion, offering “the lowest discount in history” for a large number of games. Such discounts only last for one day, and some games are still on sale after one day, but naturally not as strong as that day. ‘Community selection special offer’ is a game discount selected by the players’ votes. V club provides players with three games in the official community, and the players choose the game with the most discounts. Steam heavily discounts the lightning deals for some games, and the game changes every eight hours. In addition to that, Steam offers free games that players can play to unlock summer sale swap cards and some additional discounts for games. These discount lead users have reasons to turn on Steam every day, after all, there are different promotions every day. Also, players may play free games to get trade cards and lower game discounts. Steam cancel the above activities and replace with a more systematic and friendly discount system which is similar to the general policy of discount. The users may not know which game is a discount unless you search the store yourself.

Thirdly, Steam as a game platform has a quicker speed of internet than other competitors (Neltz, 2015). The significant influence of steam leads them to have ability pay for telecommunication companies. Steam could have a unique way for their players. That is the reserved aspect of net neutrality. If the policy without net neutrality, new media platform could have a trade to telecommunication companies. The new media platform pays the money to get a quick speed of their internet access. The platform set price which audience could choose to pay for fast speed or high-quality experience. The money earned by users payment could cover the funds which the platform pay for the telecommunication companies and also get profit in it. Even it may lead users to cost more. A large number of users also wants to pay higher to get the quick speed of internet access. It is a good trade which the platform could earn more money and have more users. Especially in Steam, a game platform which is necessary having internet access quickly. The users pay more attention in the speed of internet access more than in the price. So it is a good way for Steam paying for a particular way for internet access. They could get more users who need a good game experience by using the quick internet. Moreover, Steam could earn more money both from the increasing number of users and the users’ costs.

For the culture effect

Firstly, as the words which mentioned before PC game changes the form of games. So the appearance of Steam reveals the transformation of the PC game. In 1962, the first PC game appeared which named ‘Spacewar!’ (Bellis, 2017). The appearance if PC game reveals the unlimited available for the future of the computer games (Chikhani, 2015).

Steam provides a platform for both players and creators. That is convenient for players could choose the games they like in one platform. So also give a platform for the people who would like to invent games. Steam is a big platform, which is accessible to propaganda. That could easily have earned both money and reputation in the early time. Steam uses cloud to provide convenience to users. Cloud infrastructure refers to the delivery of computer infructure, typically represented by a platform virtualization environment. The technological of the cloud also used in Steam. The Steam Cloud allows games and the platform to utilize cloud storage hosted by Steam. Games can utilize Steam Cloud for storage of many different types of data, including game settings, save games, profile stats and other user-specific bits. Many Steam client settings are also saved via the cloud, including categories, friend nicknames and anything changed via the Steam client Settings menu. In the website of Steam (2018), these settings will persist on an account regardless of which machine it is logged into, as the settings are pulled from the cloud upon login. 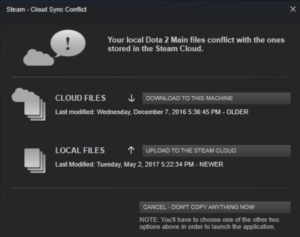 Secondly, the players in steam may stream on the live website or app like twitch when they are gaming. Alternatively, they could record both the game and their face and put it on YouTube. Both steam and the platform which have the video content about gaming earned advantages. PewDiePie is a popular gaming YouTube who has 69.4 million followers (YouTube, 2018). The video which PewDiePie play the PLAYERUNKNOWN’S BATTLEGROUNDS which is a steam game has 8.81 million times plays. That is recessive propaganda for the game PLAYERUNKNOWN’S BATTLEGROUNDS and steam. That is also related to the effects of games.

Thirdly, games in Steam could save the ethnic culture which almost extinction. The development of electronic games today, its independent art form has been recognized by more and more people. While bringing happiness to people, most games also show people’s rich inner world, convey the spiritual thoughts behind the games, and add a unique sense of participation and reality. Electronic games gradually play a role beyond entertainment in society and culture.

The culture value of Steam is concerned by society. The game ‘Never Alone’ (Kisima Inŋitchuŋa) is a good example. It is a puzzle-platformer adventure video game developed by Upper One Games and published by E-Line Media based on the traditional Iñupiaq tale, “Kunuuksaayuka,” which was first recorded by master storyteller Robert Nasruk Cleveland in his collection Stories of the Black River People (emilygera, 2014).

The value of ‘Never Alone’ focuses on traditional knowledge.

The game is based on the Alaska Inuit folklore “Kunuuksaayuka.” In the game, a girl named Nuna and an Arctic Fox work together to save the tribe by finding the source of the storm and completing an expedition on the Arctic ice cap. Along the way, they learned about soul mates, the dangers of the Arctic, and the values and beliefs that have sustained the North’s powerful communities for more than 10,000 years. Players gain clearance by controlling Nuna and Fox and using different attributes and abilities of the two characters to solve various problems in the story. As the characters move, the player opens up a series of “cultural insights” in which elders and other cultural inheritors share fascinating arctic stories and Inuit wisdom(Brown, 2014).

Upper One Games asked almost 40 Indigenous old people. Extract Inuit’s unique cultural core and incorporate it into video games. To restore the life of the Inuits.

Inuit is the language which gradually extinction.In ‘never alone,’ language is a core culture. Although there are many subtitles including English in the main part of the game, the core language is Inuit, which provides players with an immersive language environment and learning opportunities. The Inuits live in the extreme weather. The excellent cooperation of the Inuits is their traditional virtues.

Moreover, this value is widely integrated into ‘never alone.’ In the game, both Nuna and Fox have abilities that the other team does not have. Only cooperation can solve problems.

The game propaganda a culture which may be going to extinction. The language and humanity integrated into the game. Steam has many games like this which have the connotation of culture.

Fourthly, the policy of Steam helps it play a decisive role in society and help them earn more money. The Steam used to decide to delete the games which are commonly thought by part of players. However, later Steam canceled their plan. Most the users do not feel uneasy by their decision because of their excellent policy. The privacy is an issue frequently discussed in recent years. The Steam platform’s client has added a new feature called Steam GUARD, designed to keep Steam user accounts safe.

Moreover, the classification of games avoids a high quantity of problems. The game which includes violent or pornographic content has restricted in the age. That provided more choice for the different age group.

Steam is one of the most effective platforms for PC games. It has an excellent economic model and good culture effect. The choice Steam provides to the consumers, the discount in Steam, the quick internet speed and the low price attracted players which Steam make the profit in. The culture effect by Steam could not be ignored as well. Steam changes the traditional way of gaming, propaganda by the new media, save the culture and great policy.

Chikhani, R. (2015). The History Of Gaming: An Evolving Community. TechCrunch. Retrieved from: https://techcrunch.com/2015/10/31/the-history-of-gaming-an-evolving-community/

Neltz, A. (2015). Steam Now Lets You Compare Download Speeds With The Rest Of The World. Kotaku Australia. Retrieved from: https://www.kotaku.com.au/2015/01/steam-now-lets-you-compare-download-speeds-with-the-rest-of-the-world/