It would be nearly impossible to imagine our world without music. From plays, to choir, to tapes and CDs, to walkmans, to iPods, to concerts, to radio, and now: to streaming. Music is everywhere and it is almost necessary.

I remember downloading songs from LimeWire and seeding from Torrent just to listen to the whole album of my favorite artists. Until Spotify came to my life and it changed the way I consume and share music.

Spotify certainly ended piracy in the music industry, well, at least for me and most of the people I know.

However, its effects are not limited to digital piracy. Spotify has also affected the economic, political, and social aspects of our lives.

Developed in Sweden, Spotify is a music streaming service with more than a 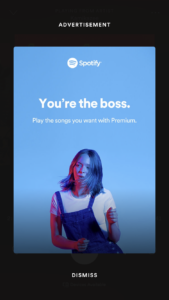 hundred thousand users. Its website can be accessed anytime and anywhere as long as there is an internet connection. It also has an application which can be downloaded on any device.

Spotify allows any user to stream music for free but with numbers of advertisements between songs which is coined as freemium. However, if users want to save songs on their devices or if they want to listen without advertisements, users have the option to purchase a subscription.

Spotify is used by millions of people around the world for personal, business, entertainment, and cultural use. It made music more accessible to anyone since it does not require its users to pay. Nonetheless, it made sharing music, talent, and culture easier with just a click and a touch on devices.

When did it become Spotify?

A decade ago, Daniel Ek made music available to any user through Spotify while advertising provided the company’s revenues. Although Daniel Ek, the Spotify CEO enjoys playing the guitar and has a passion for music, Spotify was not created to directly save the music industry from piracy. Daniel Ek and Martin Lorentzon’s original idea was to create a platform for media distribution based on a peer-to-peer network (Fleischer and Snickars 2017, p. 137). In fact, they initially presented their platform as a film distribution company.

However, since videos required too much data to process, they used music files as trials to distribute content. Spotify’s beta version was claimed to be loaded with pirated music files downloaded from The Pirate Bay by its employees (Schwarz cited in Fleischer and Snickars 2017, p. 137).

Their revenues are not just from the advertisements they play from their freemium users but also from the subscription of users who pays monthly in exchange foe ad-free streaming and downloadable music.

Being dubbed as the Most Important Man in Music by Forbes Magazine and One of the Ten Most Powerful People in the Music Industry by Billboard, Daniel Ek does not completely control Spotify. In 2009, the company’s founders lost the majority of their shares. In fact, Spotify’s existence depends on the renewal of licensing deals with record labels especially the big three: Universal MusicGroup, Sony Music Entertainment, and Warner Music Group (Fleischer and Snickars 2017, p. 138).

Spotify also partnered with numerous companies such as Starbucks, Facebook, Vogue, and Ted. These companies signed a contract with Spotify to promote their own business while making each of them a playlist.

Nonetheless, I believe the real owners of Spotify are the artists and us, the consumers. We pay them and at the same time, we are being commodified to the advertising companies.

Spotify is leading as a streaming music service. It is reported by Digital Trends that the streaming giant has 50 million paying subscriber this year and countless free users. But of course, whenever there is a king, there is a rival.

Apple streaming service, Apple Music, is impressively growing. They have about 40 million subscribers since it was launched in 2015. The rival service known for its high-level exclusive releases and is enjoyed by many since it has full integration with Apple’s iOS ecosystem (Hall 2018). Apple Music also does not have any limit on how many songs you can download.

However, the downside of Apple Music is that users have to pay the industry-standard $10 per month; there is no freemium option. And although it is available for Android, the app is aesthetically different and some of the original features are not available. It makes Spotify more user-friendly; a more adaptable app. 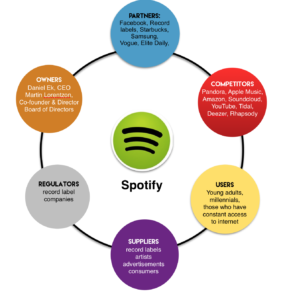 How did Spotify transform the internet and our lives?

The Power Algorithms and Humans

Spotify’s ideal user was someone with strong musical preference; the service was considered clean and easy to use as it did not push recommendations to its users. In 2011, however, the company established a strategic partnership with Facebook. The plan with Facebook was to recommend and share music based on the user’s friends had shared and put on their playlists. But this social approach did not work since many users wanted privacy and apparently, most of the user’s friends have “bad taste”.

Since the social algorithms did not work, Spotify turned to curatorial approach. In 2012 they acquired Tunigo, a company specialised in building expert-curated music playlists (Fleischer and Snickars 2017, p. 139). Moreover, in each country, they employ a playlist curator who has knowledge of the local culture and music industry. Although it seems like they were going for a human approach of curation, Spotify was reported to be simultaneously working with The Echo Nest to have algorithmic recommendation system which they have acquired in 2014.

Thus, they combined the powers of both human and algorithm to curate playlist for its users. Its competitor, Apple music, on the other hand, seemed to be warmer and had a more human approach when it was presented in 2015.

Did it kill music?

Rasmus Fleischer argues that streaming services such as Spotify represent a 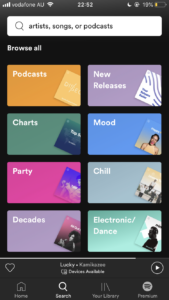 different commodification regime (2017, p. 140). In the case of Spotify, although it offers music, does not make each song a commodity; unlike how we used to consume and commodify music, there is no price tag on every song. Their commodity is the subscription of each user.

Moreover, there are issues regarding the artists’ payments. Questions such as “How much does Spotify pay artists?” has been around since the company’s success. It was a misleading question because Spotify does not actually pay artists, the company pays the record labels or distributors handling the labels (Marshall 2015, p.181).

Spotify represents a shift from ownership to access-based models in the digital industry, this business of on-demand streaming is supported by major music labels and they are actually shareholders of Spotify (Marshall 2015, p.185) 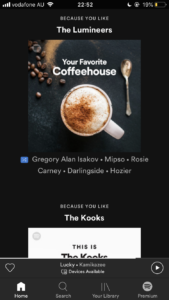 were alarmed that streaming services signalled the displacement of permanent downloads. Nonetheless, there are various interpretations of the effects of streaming in the music industry and its cultural and social implications.

Some assert that streaming promotes songs, like the function of the traditional radio. While others insist that it is a substitute for permanent downloads of digital music (Aguiar and Waldfogel 2015, p.2).

Pandora only allows consumers to stream stations with their chosen song or artist. The station then plays similar songs and artists which the user have particularly chosen. Spotify’s users, on the other hand, can choose exactly which song to hear. Paying users —those who have subscribed, have full control over which song to will be playing while free users have less control: they can only shuffle songs within playlists or albums.

Spotify did not only transform the music industry but has also changed the way of distributing other cultural goods. Like the idea that the internet provides free access to information and culture, personalised ad-targeting became more prevalent. Spotify has become a model for other services that use digital technology since its growth depended on its free version which uses advertising to commodify its content. In 2016, 70% of its users were reported to accept ads in exchange for free access to music (Vonderau 2017, p. 2).

Vonderau (2017) claims that the commodification of music or audiences (in relation targeted advertisement) are not the only notions that Spotify has depicted. Rather, Spotify shows that in today’s digital environment, markets are embedded in other markets. Spotify is not only a streaming service, but it is a media company operating at the intersection of advertising, technology, music, and—most importantly—finance (Vonderau 2017, p.3). 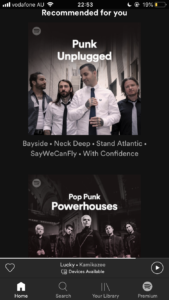 In 2016, Spotify launched more than 30 playlists with themes on LGBTQ labelled ‘#PressPlayForPride’ which celebrated US’ Pride month and emphasises the company’s support for diversity. LGBTQ-themed playlists symbolise both cultural and digital transformation and diversity; they amplify the logic of LGBTQ cultures and politics (Dhaenens and Burgess 2018, p. 2). These playlists included numbers of playlists curated by ordinary users which are shared publicly; they have become cultural works.

Playlists are considered a great feature of Spotify. The platform offers a free playlist according to each user’s personal taste through an algorithm based on the user’s location and listening history. Spotify also creates various playlists based on mood, activity, genre, decades, or event. Wargo (2017) insists that curating and listening to public playlists allowed young people to create community and social norms for interactions (cited in Dhaenens and Burgess 2018, p. 5).

Playlists can be created by any user: a subscriber or not. The user can choose to publicly share it, to send it to anyone or keep it to him/herself. Curating playlists and the playlists themselves are forms of self-representation.

The act of curation of identity-themed playlists such as #PressPlayForPride is thus both an act of self-expression and a contribution to public culture (Dhaenens and Burgess 2018, p. 5).

Moreover, Spotify gives users personalised playlists, that is hands down, the smartest thing n the internet. I instantly fell in love with the music and artists Spotify put into my playlist. The called them Discover Weekly which is a 2-hour worth of music which provided every Monday and Daily Mixes which are my favourite Spotify feature.

Both the users (as playlists curators) and Spotify are agents of cultural transformation not only by showing support for LGBTQ but also for the music and digital industry.

Spotify has indeed changed how music is consumed, experienced, and shared. 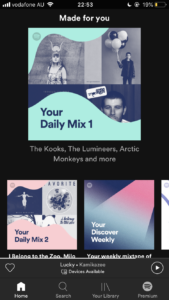 It showed how powerful the internet really is by giving anyone an access to great collection of music. Social sharing of music became easier. Expressing emotions and cultures through music became a norm.

Spotify changed the way we live everyday, because we have easy access to the internet and music, we have more reason to put our earphones in our ears and to be seemingly unapproachable. Spotify have created another way to be engaged in the digital word rather than the real world.

On the other hand, we became more cultured, more creative, and more attached to music through Spotify. We use it to cultural events, to entertain us, to express love and arts, and lastly, be more aware of ourselves through the playlists and of course, music in general.

About Karen Mae Francisco 3 Articles
I'm an international student from the Philippines! My real name is Karen but everyone calls me Stu. I'm a third year arts student majoring in Anthropology and Digital Cultures.
Instagram