Image: Compilation of Jeff Bezos, Kindle by Mike Licht and Fire by Liz Fitch from Unsplash and Flickr, All rights Reserved (linked on left)

In this essay, I will provide a perform a critical analysis of the historical development of Amazon.

I provide evidence that Amazon has the potential to disrupt a few industries, but I focus on Amazon’s former and continual disruption of the book and  publishing industry. I question Amazon’s reputation, outline its social, political and economic repercussions and analyse the power dynamic between its networked relations.

What is Amazon and Historical Development?

In 1995, Amazon was launched as an online bookstore by Jeff Bezos under the placeholder name Cadabra. Bezos aimed to curate the largest and most comprehensive online bookstore, thus he renamed the company, his sentiment stemming from:

By 1999, Amazon had distribution centres in the US, Europe and Asia and expanded its online store to include toys, kitchenware and electronics (Applegate, 2008, p.2).

In 2000, the widespread adoption of the internet spurred brick-and-mortar stores to transition online. However, large retailers were hindered by this transition due to high risk, lack of organisational readiness and internet skill (Nikolaeva, 2006), thus allowing Amazon to become the website host for many of its competitors (Ritala, 2011).

Recently, Amazon has transcended from the internet into a brick-and-mortar convenience store, Amazon Go, and bookstore, Amazon Books. Other services include payments, publishing, delivery, advertising and entertainment subscriptions (Amazon, 2017)

Amazon has  reputation as the ‘Everything Store’ and is at the forefront of innovation (Stone, 2013, p.138).  In 2018, with the recent acquisitions such as Wholefoods and PillPack, Amazon has plans to enter the healthcare industry. In addition, Amazon’s digital assistance device, Amazon Echo, can aid in the collection of data in dementia research (Firth et al., 2018).

Amazon is a company who caters for all consumers by offering a diverse set of products and services at competitively low prices.  Wu and Gereffi (2018) argue that Amazon’s use of a platform business model, defined as value creation through the integration of digital capabilities and physical assets, accounts for its widespread utilization.

By allowing online retail vendors, third-party merchants and small sellers to use Amazon Marketplace and by directing consumers to a competitor’s low price product on its search engine, Snihur, Thomas and Burgelman (2018) propose that this ensures Amazon is visible, credible and have strong relationships key industry stakeholders, which are characteristics of a disruptive company.

Moreover, unlike most companies in the digital economy which focus on profit margins, Amazon invests in internal innovation (Wu & Gereffi, 2018) aligning with its values which include customer obsession, simplicity and frugality which are values instilled and regulated by CEO Jeff Bezos.

Amazon’s use of dynamic repricing algorithms, an automated price adjusting using collected price data from web-crawlers, to stay committed to their lowest price mentality. Third party vendors or small sellers have access to these algorithms through Amazon Marketplace which automatically adjusts the price of their goods depending on demand and rarity (Chen, Mislov & Wilson, 2016). Ultimately, by using Amazon’s infrastructure, whether consumer or supplier, data is collected to optimize customer service (Wu & Gereffi, 2018)

Iansiti and Levien (2004) define the internet ecology as an online platform of services, tools or technologies which are utilized by consumers, suppliers, partners and competitors alike. The authors emphasize that boundaries of the internet business ecosystem are not distinct and each business can take on many roles, thus each business can be viewed through its networked relations.

Books are standardized commodities which only differ in format (paperback, hardcover and e-book) and price. Bezos’ idea to curate an online bookstore was not unique and Amazon entered the market with competitors such as Unlimited Books.com, the online platform of Cleveland-based bookstore Book Stacks (Stone, 2013, p.46).

The digitization of retail allowed Amazon’s sales and visibility to grow significantly across the internet. Thus, was able to partner with major publishing houses for reduced wholesale prices on books (Lu, Shi & Huang, 2018) and allow third-party vendors to sell on the website (Strategic Direction, 2018), Amazon also supplies its own inventory of books in fulfilment centres.

Ritala (2011) outlines that the relationship between Amazon and its book competitors, such as brick-and-mortar bookstores, Barnes & Noble, Borders and Publishing houses, Penguin RandomHouse, Harper Collins, operates in a unique coopetition state. Coopetition is defined as the collaboration between competing firms in order to gain benefits they could not achieve alone, for example, sharing distribution channels, co-marketing and data collection (Ritala, 2011).

For example, due to Amazon’s popularity and internet traffic, small bookstores increase sales when they sell through Amazon’s website infrastructure. In return, Amazon benefits by commissioning these sales. Even though small bookstores are in competition with Amazon, most of their sales rely on this website, thus shifting the power dynamic towards Amazon. 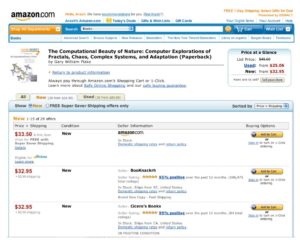 Aside from physical books, Amazon has partnered with publishers, such as Harper Collins, and suppliers, such as Readerlink, to spur the transition into e-books (Gilbert, 2014). Within the realm of e-books, Amazon competes with online book libraries such as Project Gutenberg and Overdrive which allow free access to e-books. Amazon’s addition of self-publishing features has put it in direct competition with the publishing industry and other e-book platforms such as Apple’s iBooks (Gilbert, 2014)

Amazon has and continues to disrupt the book and publishing industry and its transformative effect was 1. becoming the largest online retailer for book sales 2. facilitated mass transition from physical books to e-books (Gilbert, 2014).

“[Amazon] controls around 65% of the e-book market today, while its share of the e-reader market hovers around 74%. Players that appeared up-and-coming even a few years ago are now retreating from the market. Sony closed its U.S. Reader store and is no longer introducing new e-readers to the U.S. market. Barnes & Noble, meanwhile, has slashed funding for the Nook by 74% .The only real e-books competitor left standing is Apple”

Khan (2017) demonstrating the effect Amazon alone has on book sales.

Havalais (2013) propose that search engines are attractive to consumers as they use the least amount of attention to obtain information. Compared to other primitive websites, Amazon’s clean interface and intuitive search bar allowed it to become the most popular search engine for books.

By extension, Klaus (2013) argues that Amazon’s easy to use interface and impeccable customer service fosters a sense of familiarity and trust, as well as the convenience of One Click reliable orders and fast delivery services.

Data from the Association of American Publishers, in 2008, after the introduction of the Kindle, Amazon’s e-reader device, led to a rise of 117% in e-book sales and drop of 18.6% in print books (AAP, 2017) which has led to the demise of many brick-and-mortar and independent bookstores.

Although Amazon’s online business model not new, Amazon’s dominance in the realm of book retailing has economically disrupted the publishing industry.

Empirical research by Greeve and Song (2017) found that customer reviews on Amazon were valued more highly than those of critics when deciding to purchase books. Book publishers were prized by authors on their connections to bookstores and marketing resources. However Amazon introduced self-publishing features which offered the marketing use of their website at low-cost and high royalties.

In 2014, a third of Kindle Bestsellers were by self-published authors, thus changing the dynamic between authors and publishers. The above factors show how Amazon has disrupted how authors, consumers, suppliers relate in book sales and the traditional systems in place. In particular, reducing the need of publishing houses and increasing dependency of authors on Amazon.

In 2016, Amazon ranked 1st in Global RepTrak Top 100 most reputable companies, ahead of competitors such as Netflix, Apple and eBay (Reputation Institute, 2018) and recent public surveys associate Amazon with adjectives such as modern, likeable, innovative and creative (Statistica, 2017).

The success of Amazon’s e-books delivery services is attributed to Bezos’s race for faster innovation and no tolerance for failure. Despite, its positive reputation, Amazon has been under critique for its unfair treatment of its employees and has directly changed how Amazon relates socially with its suppliers and employees Chan (2015, p. 17).

A core element of Amazon is its Fulfilment Centre a large scale distribution center, where employees pack orders for delivery.

“Amazon was also quite stingy when it came to installing an air-conditioner as well. “In one famous incident, Amazon hired paramedics to revive heat-sick employees at a Pennsylvania warehouse rather than buy an air-conditioning unit” (Foer, 2014, as cited in Chan, 2015, p.18)

However, through exemplary customer service, Amazon changed customer’s expectations, towards expecting premium service for low cost (Chan, 2017). Henkel and Colleagues (2018) found that if monetary maximization is the goal of the consumer, which is often the case when shopping on Amazon, that consumers dehumaised employee experiences.

For example, consumers viewed employees as a ‘means to an end’ and were more likely to disregard their feelings of pain or sadness. Moreover, the authors found that this dehumanizing effect could be elicited if a brand is positioned to be thrift-orientated (Study 1, Henkel et al., 2018), which matches Amazon’s description.

Lastly, Amazon’s leveraged its economic dominance to sway political and consumer decisions. In some US states and Australia, Amazon requires its customer’s to pay a sales tax upon check-out online (Baugh, Ben-David & Park, 2018). This post-checkout tax is another tactic to reduce costs.

“In 2012, Amazon surrounded in Texas, South Carolina, Pennsylvania and Tennesee, negotiating accommodation that allowed it to stat tax-free for a few more years in exchange for putting a new fulfilment centre in each state” demonstrating Amazon’s political influence (Stone, 2013, p.200)

Amazon’s threat to competition in all retail categories, not just books and publishing, has instigated uproar regarding antitrust laws. Khan (2017) argues that current antitrust law is inadequate to address competition in modern business and internet. Khan (2017) anticipates that future anti-trust law will address harms against supplies and producers and not just against consumer interests, as a result, may leave Amazon vulnerable.

Overall, Amazon has led internet transformation in online retailing and has transformed the book and publishing industry. By positioning itself as the dominant search engine for books and other commodities, Amazon was able to become an economic powerhouse. However, in the strive for innovation, Amazon has been met with negative social and political repercussions. Amazon will continue to disrupt online retail and through its networked relationships will continue to innovate various industries.

Stone, B. (2013). The everything store: Jeff bezos and the age of amazon (First Back Bay paperback ed.). New York, NY: Back Bay Books/Little, Brown and Company.

Hate Speech on the Internet

Defining Hate Speech Hate speech, on the surface, seems easy to identify. The definition states that it is ‘speech that attacks, threatens, or insults a person or group on the basis of national origin, ethnicity, […]

How is social news sharing embedded in our lives?

The notification center of mobile phone is full of entertainment, finance, sports and political news from various apps. When you open the social media platform, you will see what current news people are discussing and […]

Whether it be the rise of the internet, the popularity of social media, the rising importance of big data or the practicality of location based services; these are all moments in history that have propelled […]