The dramatic development of technology and the Internet has created a new reality around how we work and live. Uber, an app that offers an on-demand ride-sharing service demonstrates this concept through its innovative business model that has triggered a ride-sharing revolution (Watanabe, Naveed, Neittaanmaki, 2014).

A critical analysis will be performed on Uber’s transformative effects on the transportation industry, technology startups and our society.

I will begin by providing background on Uber and the history of its development. I will then examine Uber’s business model and provide an industry review on the ecology of Uber. Finally, I will discuss whether Uber has creatively destructed the industry and the impacts it has left on our society.

Uber is an app developed to provide an on-demand ride-sharing service. Uber makes the middleman, e.g. the taxi dispatcher, redundant by using the Internet to directly connect the driver to the passenger. It allows the driver to work independently and become their own boss. This reflects the current shift from traditional employment to self-employment and temporary work (Freeman, 2015).

The technology platform intermediates between two groups. The first group are people with idle and excess capacity, in this case extra time and underused cars, and are looking to engage in a market exchange. The other group has a demand for this capacity and is prepared to pay for it. Uber verticalises aspects of this intermediation through presetting prices, preselecting the drivers and riders, implementing quality control and policies to increase transparency (Schneider, 2017).

The innovation of Uber has created unprecedented competition within the taxi industry (Cramer, Kruger, 2016). However, Uber is clear in defining itself- it is a technology platform and refuses to be treated as a taxi company.

Uber is an example of the “sharing” or “gig” economy, where algorithmic technologies are deployed to organise and manage work (Scholz, 2017). It refers to the phenomenon of transforming under-used or unused assets, such as cars, into productive resources (Wallsten, 2015). The platform regards both drivers and riders as users of their services. This allows them to avoid an employment relationship with the drivers and the obligations that are attached (van Doorn, 2017).

In 2008, when Travis Kalanick and Garrett Camp were attending an event in Paris, they had trouble getting a cab. The idea for Uber was born.

The app UberCab was launched in San Francisco in 2009 and experienced huge growth in 2011 where they became just Uber. During that year, they raised $11 million in a Series A round of funding early in year. Around December, Uber raised $37 million in Series B funding (Blystone, 2018).

During the growth of Uber, strong resistance arose from both the taxi industry and government regulators. For the taxi and limousine companies, their manifested their unhappiness through protests regarding the regulation of Uber. For example, in 2014, taxi drivers in Europe staged a large-scale protest regarding the unfair competition Uber presents. Taxi providers seemed to attempt using regulation as a barrier to entry and believed that they will benefit from preventing Uber from entering their market (Schneider, 2017).

It is interesting that taxi drivers did not take the route of protesting for less regulation to match with Uber and fairer competition.

In addition to the regulatory challenges Uber faces, there have also been some controversies. In New York, it was revealed that Uber was underpaying drivers through charging commission based on pre-tax income. This issue brings attention and questions regarding the fairness of which party ends up paying the taxes. The New York Times found evidence that Uber was avoiding tax and passing the burden onto the drivers.

On 2017, after a shareholder revolt that involved one of their biggest shareholders, Benchmark (a venture capital firm) Kalanick resigned and Dara Khosrowshahi (ex-CEO of Expedia) took over.

Earlier this year, SoftBank, a software giant, bought 15% of the company and included in the deal was a “one-share, one vote” rule.

Uber’s business model is built on the asset of sharing and the development of a collaborative ecosystem. Uber provides riders with higher quality service through saving time and cost. Drivers also benefit from an efficient system that doesn’t require additional license fees and investment (Watanabe, Naveed, Neittaanmaki, 2014). They can work according their own hours, choose their passengers. Uber’s use of big data also provides them with agility to respond to real-time market changes (Kavadias, Ladas, Loch, 2016).

The rating system on the platform is two-way and results in a higher level of transparency and quality. For the drivers, they are encouraged to have cleaner cars, better manners and extra services like bottled water as a way to earn high ratings. Riders also attempt to be polite and clean, since a low rating could mean less drivers would be willing to drive them. The rating system is an essential part of the business model as it allows both groups to learn about each other, create trust. It ensures a better travel experience (Kavadias, Ladas, Loch, 2016).

The process of using Uber is broken down into four main steps. The first step in the business model is to create demand and therefore, involves requesting a car. The second is matching passengers with drivers, with the driver having the option to reject or accept the ride.  The third step is the ride, where riders can use the map to track the ETA and route. Finally, the fourth step is payment and rating, where automatic payment occurs through a linked card and both rider and driver have the opportunity to rate the ride.

In terms of revenue, Uber generates income through providing different ride options to cater to everyone and surge pricing. Uber provides different car models to cater for a wide range of users. By offering a range of services like UberPool, where riders share the care with other riders to save money, or Uber SUV for luxury, Uber can capture a vast customer segment.

Uber also has a hand in determining the price of the ride. While fare estimates are shown on the app in advance, possible charges for tolls or cleaning fees can be added. The pricing is also subject to “surge” pricing, which can dramatically increase the fare rates. This incentivises drivers to offer their idle capacity during peak times. However, Uber has come under fire for this surge pricing model, as many consumers have been ambushed by incredibly high fares.

The Ecology of Uber

Within the wider transportation industry, Uber has established itself as the trigger to a ride-sharing revolution (Watanabe, Naveed, Neittaanmaki, 2014). Uber still retains its significance in the ride-sharing industry, despite increased industry competition (IBISWorld, 2018). Although Uber’s most direct competitors would be other ride-sharing services and taxis, they still face external competition from public transportation (Wallsten, 2015).

In Australia, internal industry competition is intense, with other companies such as Lyft and new entrants such as Taxify, DiDi and Ola. These new entrants have had to use heavy discounts on their prices in order to compete and gain a foothold (IBISWorld, 2018).

Both drivers and riders are consumers of Uber, as it acts as a platform to connect the two. Drivers use Uber as a platform to earn money, while riders use it for on-demand transportation service.

Due to the business model of Uber, the main suppliers can be identified as the drivers. The drivers offer their otherwise unused vehicles into on-demand taxis. Other companies such as payment services (e.g. Visa) provide support in the automatic payment system.

In terms of regulations, a number of communities, governments and organisations influence how Uber is regulated. For example, in Australia, the ATO ruled that the drivers needed an ABN and be registered to pay GST. This move prompted Uber to file suit against the ATO, arguing that it “unfairly targets Uber’s driver-partners”.

Transport for New South Wales made it clear that ride-sharing services “must be provided in a licensed taxi or hire car, by an appropriately accredited driver, authorised by Roads and Maritime Services (RMS)”.

State governments across Australia also made decisions regarding the legalisation of Uber. The taxi industry, as briefly mentioned in the sections above, has also made moves in an attempt to increase regulations around ride-sharing apps like Uber.

Here is a diagram that shows the relationships between all the groups in Uber’s ecology: 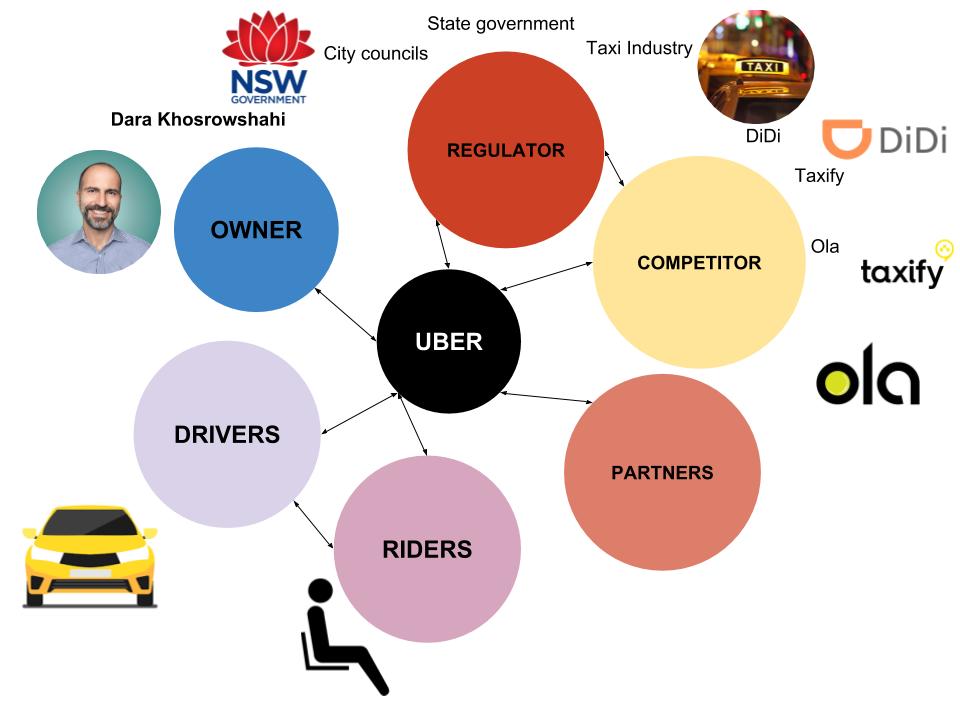 Uber: Is it Creative Destruction or Entrepreneurial Alertness?

“Uber is the archetype of digital disruption. It has completely changed the face of the transportation industry, specifically the taxi hire business” (Burns 2016).

Although this quote suggests Uber is a clear case of creative destruction, the transformative effect of Uber is not as definitive (Schneider, 2017).

Creative destruction can be defined as an innovation that changes all the market processes when introduced. All agents that don’t embrace this innovation are eventually eliminated (Schumpeter, 1942).

Uber as a Disruptive Innovation

A study conducted by Wallsten (2015), in New York and Chicago, has shown that the growing popularity of Uber is associated with the decrease in passenger complaints about taxis. In Chicago, there was a decline in specific complaints about taxis, e.g. air conditioning, broken card machines, driver manners and talking on mobile phones.

The introduction of Uber has forced taxis to improve their quality of service in order to compete. Taxis have also adopted technology into their processes with apps for price estimates, hailing taxis and location trackers. In this sense, Uber has creatively destroyed the taxi industry through making technology-based conveniences a necessary condition (Schneider, 2017).

Uber has also had a transformative effect on businesses through the concept of “Uberization”. This term was coined to communicate the concept of intermediating idle and excess capacity. It describes the adoption of these core principles of Uber into other businesses and activities. As Freeman (2015) puts it, “take the power of Uber and apply it to X”. As Uber is becoming a new standard for technology startups, it could be considered an example of creative destruction (Schneider, 2017).

Rather than a creative destruction, Uber has been argued to be an example of entrepreneurial alertness. As described by Kirzner (1979), entrepreneurial alertness is the recognition of existing inefficiencies in the market, find solutions and then capitalises on the improvement. Inefficiencies such as wait time, cost, low-quality service or lack of transparency are either cut or eliminated by Uber.

Rather than destroying the market, Uber uses its competitors as a source of differentiation. Uber relies on taxis to continue to be inefficient so that Uber can have an advantage in the industry. This is not creative destruction since the core market processes are not new or destroyed (Schneider, 2017).

What are the Impacts of Uber on Society?

Uber has changed our expectations about transportation services. We now require on-demand transportation and a cheaper but higher quality of service with less inefficiencies. The taxi industry, as a response, was forced to accommodate to these higher expectations in order to remain competitive. In this regard, Uber has had a major transformative effect on both the way we think about getting a ride and the industry.

The platform has also become a core inspiration for many technological startups.

The popularity of Uber and the growth of the ride-sharing industry has also pressured regulators, such as the government, to make changes to the law. Changed and new regulations are put into place as an attempt to keep up with the emerging industry and depicts how Uber has been a leader in affecting chang

While it is obvious Uber has left major impacts on society, we cannot say for certain the platform has been creatively destructive. It has been argued that it is instead, a case of entrepreneurial alertness.

Freeman, S. 2015. Uberization of Everything Is Happening, But Not Every Uber Will Succeed. Huffington Post. Retrieved from https://www.huffingtonpost.ca/2015/04/01/uberization-uber-of-everything_n_6971752.html

Wallsten, S. (2015). The competitive effects of the sharing economy: how is Uber changing taxis. Technology Policy Institute, 22. Retrieved from https://techpolicyinstitute.org/wp-content/uploads/2015/06/the-competitive-effects-of-the-2007713.pdf

van Doorn, N. (2017). Platform labor: On the gendered and racialized exploitation of low-income service work in the “on-demand” economy. Information, Communication and Society, 20(6), 898–914.

Blystone, D. (2018). The Story of Uber. Investopedia.com. Retrieved from https://www.investopedia.com/articles/personal-finance/111015/story-uber.asp