Facebook has evolved to become one of the most diverse, controversial and powerful social media platforms in the world. The transformative effect of the app comes at a response to the introduction of innovative technologies and tools that have given audiences new access and greater ways to express individual ideas, perceptions and views on the world. With a focus on the liberty that comes through this new level of communicating and having conversations. Our understanding of our dependence on the site as a news source globally, politically, economically and in relation to personal matters is heightened.

The first part of the essay will provide the audience with an understanding of the framework and nature of the social media platform. By analysing the history of successes and loses over the years, one becomes more aware of the value the platform is to the development and construction of the relationship between the world and the platform in the 21st century. The second part of the essay will show the internet environment and built ecology Facebook has constructed.

Facebook is a social news sharing digital platform that focuses on constructing mediated conversations, spreading awareness of news and building a community from around the world in an online environment. This transformative effect has established an evolution of democratic publishing tools through its participatory nature of over 10 million Australians (Garlick, 2012 in Bowles, 2014, p. 309).

It has allowed people to become users and publishers themselves through common property and tools such as discussion posts, group chats and status, influencing individual participation and merit. The construction of an online community through open participation, communal evaluation and freedom of expression has allowed us to understand the multifaceted and innovative world that is leading to a form of coercion. The transformative effect online has been further reflected in the changes of culture in reality and the events and thoughts that have consequently become more visible.

The origins of Facebook have been a tumultuous and controversial journey since its launch as ‘the Facebook’ by the Harvard sophomore, Mark Zuckerberg in February 2004. The network expanded rapidly from a Harvard social-networking site to a worldwide social media platform phenomenon.

Its growth in participation and social connection has been on a continuous increase for the past 14 years, reflecting its immersion and influence to and from all areas of life including political, economic, cultural and social. In ‘2010 it became one of the biggest web sites in the world, visited by over 400 million people per month’ (Carlson, 2010), growing to gain over 900 million users in 2013 and has most recently gained 2.27 billion monthly active users in the third quarter of 2018 (Statista, 2018).

Whilst many of the services and technologies have changed, Facebook has remained free to join and continues to gain profit through advertising revenue (Phillips, 2007). The evolution of Facebook has been controversial since its beginning creation in 2004.  Mark Zuckerberg has come under fire and battled lawsuits over the Facebooks origins, created rivalries with social media competitors such as Google and Yahoo and most recently, Zuckerberg has been rigorously criticised for the exploitation of user’s privacy and data (Bloomberg, 2013).

The development of Facebook has reflected the changing matters of the world. The way it transforms and develops over the years is relatively in the power of the individuals as it is their opinions and perceptions of specific political, economic and social issues that drives the discussion pages and involvement in online news. Additionally, it is the participants ‘wants and needs’ as consumers of Facebook that motivate the developments of the platforms functionality and technological transformations.

“This vision of the world – and Facebook’s role in shaping it – is deeply embedded in how Facebook’s top executives, developers, marketers and programmers think about the service and its purpose. It is their ideology” (MacKinnon, 2012, p.150). The new access to social media services such technologies and tools on Facebook has given audiences and groups a greater platform for expression and freedom of historical, economic, political and cultural development. As referenced by Zuckerberg, Facebook is “making the world much more open and connected”.

The developments influence people’s ability to communicate not only through Facebook itself, but also through a rapidly expanding universe of other correlated platforms and ideals highlighting a ‘convergence of user-generated content and social connection’ (Burgess & Banks, 2014).  Facebook’s ability to mediate the online conversations reveal certain behaviours in society, reflecting the change of thinking and transformation of ideals over the past decade. Facebook has continuously tried to act as a democratic publishing tool by giving the world a platform where the individual is heard, further motivating people to participate in online forums and discussions.

The political, economic and cultural elements of the world are broadcasted and reported on Facebook as part of the news innovation aspects. The way people interact with the conversation is positive in that it gives people freedom of expression, but also leaves people with lack of security and defence which is where issues arise, influencing the changing behaviour and shape of the world both online and offline.

A business model is ‘a conceptual structure that supports the viability of a product or company and includes the purpose and goals of the company and how it intends to achieve them’ (Das, 2018). The revenue account of the business model focuses on user-targeted advertisements as a primary source of revenue for Facebook, therefore emphasising the significance of the ‘user-base’ aspect of the site.

Whilst this business model is still very much dependent on user-targeted advertisements, the site has diversified the reach of its platform. By taking ownership of other social media platforms such as Instagram, Facebook Messanger, Whatsapp and other mobile applications and websites they have contributed to the collection of information and other marketing related updates that further enhances Facebooks ability to earn revenue.

The purchases of other social media platforms have also ‘diversified its [Facebook’s] presence and made it easier for users to connect to the world through Facebook’ (Pahma, 2018). The greater involvement of Facebook into the online world has substantially influenced users’ position and behaviour as online participants in the community. However, the level to which Facebook has integrated itself and the change in its framework has led to the emergence of social and cultural issues.

The social and cultural issues arising from the network change

The relationship between the vision of the world and Facebook’s role in shaping is has a hugely responsive influence and dependence on one another for the creation and distribution of information. Whilst this shows its huge transformative effect and connection to its involvement in political, economic and cultural issues occurring in the world, it also creates a problem with the governance that Facebook has created.

The great control Facebook has on the governance of the online community including participants personal data and details, manufactures an argument about the trade-off between data and security and privacy protection. ‘Facebook’s ownership of this democratic forum carries great responsibility’ (MacKinnon, 2012, p.156). The control of Facebook’s governance is causing an uncertainty with social and cultural norms due to the fact that the rules are not being enforced consistently or uniformly, there is no straightforward appeals to the participants of the rules and regulations.

The goal for the future in order to manage this platform of self-regulation is that it needs to take control of the governance of the community in which there is a management of space, clear terms and conditions and guidelines of use that is highlighted to the audience.

The Cambridge Analytica scandal has caused discomfort and unease in the online Facebook community as the scandal resulted in a loss of trust and rise of social and ethical issues amongst the participants. The Facebook scandal that occurred in 2018 was when ‘information from personal Facebook accounts was harvested on an unprecedented scale’ (Cadwalladr & Graham-Harrison, 2018) as further explained in The Guardian Article.

The exploitation of people’s identities and personal data defied Facebook privacy regulations and created ethical uneasiness amongst the online community. Zuckerberg came under fire for the reports and has since apologised to those 50 million profiles that were breached and instigated the creation of greater privacy controls and technology. The ethical and social issues have led audiences to question their involvement as participants on the platforms as well as the general security around social networking sites and their roles as pioneers in transforming the status of internet use in reality.

As stated by Tim Dwyer and Fiona Martin (2017, p. 1095) the social news sharing ecology ‘shapes the way that social media companies and their social media intermediaries are transforming news commodification, production and distribution through the use of algorithmic information processing’. The companies controlling our digital networks and platforms represent pivotal points of control over our relationship with the rest of society and the government. By creating new found ways of transcribing and communicating information from social media platforms to a wider audience, the sharing of new found information inhibits an amplification of net news reach.

Facebook acts as a key competitor in the social media world, providing participants with search engines, global discussion pages on a range of different economic, political and social issues and a built community that establishes social news sharing devices and a mediation of conversation.  Competitors such as Google, Yahoo!, Twitter and WeChat all provide similar communicating tools and search engine devices however it is the motivation and self-regulation in the human interest of the participants that has allowed them to gain such prominence (Carlson, 2010).

The core suppliers and users in the creation and evolution of Facebook is the power of the individual as it is their interests and participation in the site that innovates discussion on political, economic or social issues. The ownership, control and participation of the users is what drives production of the sharing ecology and thus gains revenue through targeted advertising. 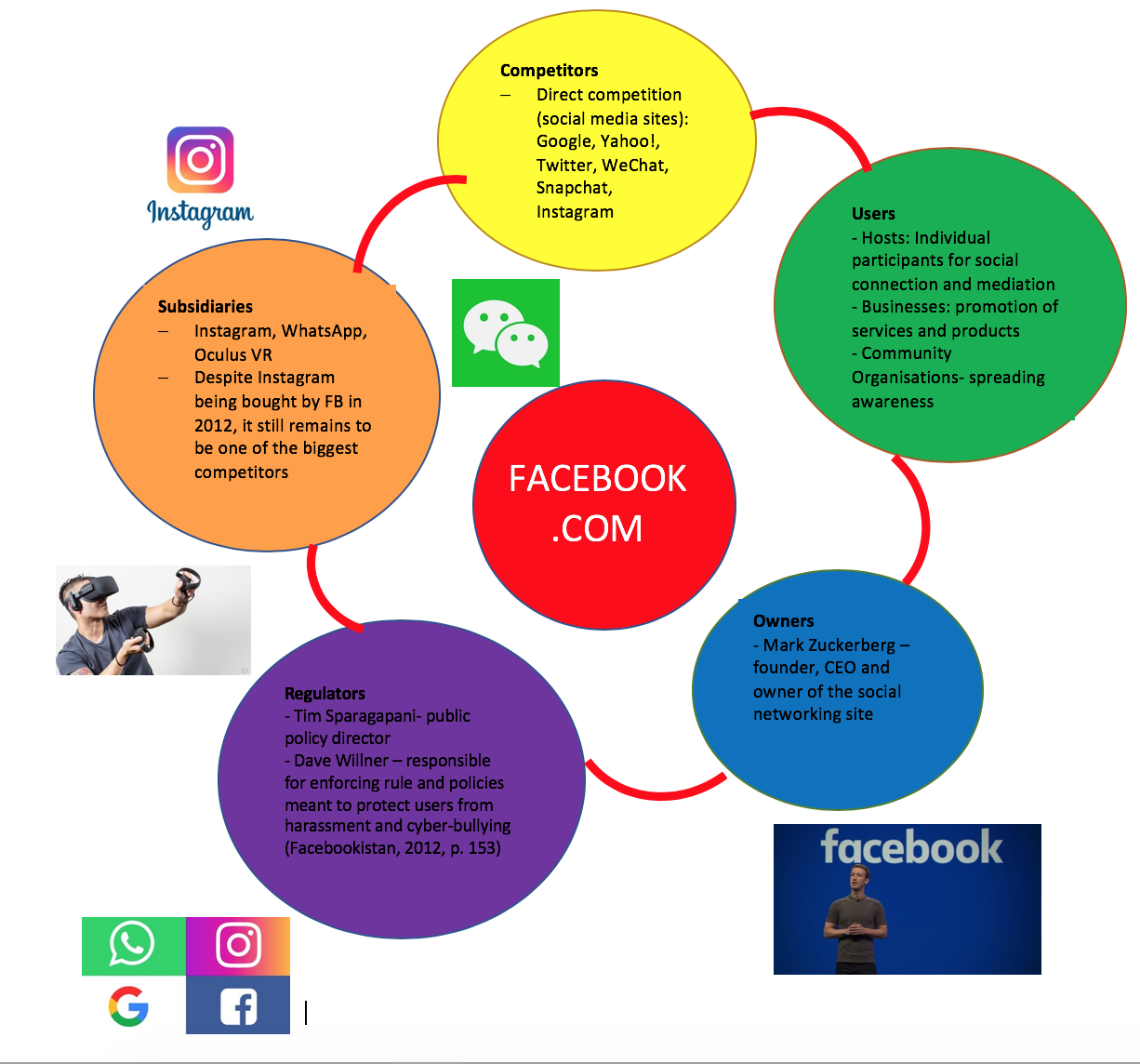 The relationship between Facebook and the world has evolved rapidly over the past 14 years as innovative technologies and tools have been introduced into the nature of everyday life and individuals have gained greater access and control of their expression on political, economic and social issues both online and offline. By understanding the controversial history of Facebook, our understanding of the transformative nature of the social media platform is heightened. In the future, as outlined in Facebookistan, Facebook needs to continue to further upgrade its social contract with the governance of our digital lives, in order to keep up with the management and development of evolving identities in the digitally dependent 21st century world.

There is no excerpt because this is a protected post.

In the era of digital transformation- What have been Facebook’s biggest accomplishments?

What is Facebook   The recent revolution in online communication has resulted in radical changes in the way people communicate with each other. Facebook, as one of the most visited website on the internet, it […]