Social media is defined as using various types of electronic communication for assisting users to create online communication which includes sharing information, ideas, private messages, and other images. Sharing information on social platform is a common phenomenon in the current society as individuals could be seeking for position and social capital, maintaining companionship, seeking for entertainment, exchanging information, aiming for political mobilization and involving in affective engagement. Providing and sharing is an obligation of individuals in social media platform which allows users to create, share and communicate.  According to the reading of Mauss, in the social networks, obligation is divided into three types; obligation to give, obligation to receive and obligation to reciprocate (Mauss, 2016). In addition, John stated that “share” can be divided into three root meanings; to divide, to find something identical and to communicate one’s personal feelings or experience (John, 2017). Social media offers three main functions; provides users analytic based on service interaction, build communities and attract audience for this content as well as sharing, combining, creating and recommending media representations. With the multiple functions of social media, it cannot be denied that it provides a large storage of capacity, manage content and is a remote server based and internet connected software application (Gillespie, 2017). However, social media is critizied for tracking user’s searches, use of information and production to cater suitable favor of users, such as advertisements, games, product offers and services (Gillespie, 2017). This essay will analyse the history of Instagram and the transformative changes brought to the economic, social, cultural and political aspects of the society.

The word Instagram is a coined word of instant camera and telegram. Instagram is a social media that users can share photo and videos online. It was created by Kevin Systrom and Mike Krieger in 2010. Instagram provides a platform for users to upload and share photos and videos which can add various filters, tags and location. While sharing the posts, individuals can choose to share the post publicly or privately as other users can press the heart button for “like” or left comments behind and even chat with user privately. The development of Instagram started in San Francisco when Kevin Systrom and Mike Krieger determined to focus on the multi-featured HTML5 check-in project on mobile photography.

In March of 2010, Systrom received a $500,000 seed funding from Baseline Ventures and Andreessen Horowitz on Burbn when Systrom joined the gathering for the startup of Hunch situated in Silicon Valley. In July of 2010, the first photo of Instagram was posted which was a dog in Mexico and Systrom’s girlfriend’s foot. In the October of the same year, the Instagram iOS app was officially launched in the app store. In March of 2012, Instagram was bought by Facebook for $1 billion. In November of 2012, website profiles were created on Instagram; however, the app lacked a search bar, a news feed, and the function of uploading photos, thus the app was redesigned and added function of supporting videos and directing messages in 2015 and 2016 respectively. In addition, in May of 2016, theme of black and white, modern and colorful icons were added onto Instagram and it was discovered that 80% of the users were outside of the territory of the US and 50% of the users are android users till 2017. In September of 2018, the head of Instagram was replaced by Adam Mosseri, thus Krieger and Systrom withdrew from Instagram.

Instagram addiction has become a severe issue in the society which affects individual’s health as individuals spend plenty of time on using and browsing Instagram. According to the new data from online measurement company SimilarWeb, Instagram users spent average 53 minutes per day in 2018 of June (Rani & Kurt, 2018). As a result, spending overwhelming of time on Instagram could cause addiction in Instagram which affects the daily life of a person. For example, from the interview of ABC news, a girl named Charlotte Meagher admitted social media app changed the way children live (Ashielgh, 2017). Charlotte mentioned that she reduced her amount of food to maintain the skinny image on the Instagram which ruined her childhood for pursuing the perfect life (Ashielgh, 2017).

With the addiction of Instagram, the mental health of individual is at stake. It is no doubt using Instagram is not only a kind of self-expression, but can also establish self-identity, create community, personal communicating and emotional support. However, from a 2015 study, using more than two hours per day on social media is associated to mental health issue, psychological distress and suicide thoughts among teenagers (n.d, 2017). In the recent research published by the United Kingdom’s Royal Society for Public Health, it is claimed that Instagram is the worst social media platform for teenager’s health and wellbeing as Instagram could cause high level of anxiety, depression and bullying (n.d, 2017).  When individual posted images or videos on Instagram, he could feel anxiety for the low number of “like” given to his post as this would demolish the self-esteem of individual. The number of “like” received from other users is tantamount to the attractiveness of a person. Furthermore, “life envy” could occur while viewing posts of friends entertaining or having vacation as individuals would easily compare each other’s life and feel despair for having less enjoyment. In addition, Instagram always has images edited and added filter to ensure it looks “perfect” which gives an illusion to female users that the body shown in the photo is the ideal body shape. As a result, female users could feel less confidence and have depression after viewing the “perfect” body image and even judge her own body shape which finally undermine her own value.

Bullying is another negative result caused by social media and Instagram has become one of the most common platforms that occurred.  According to the Pew survey, 59 percent of teenagers have experienced cyber bullying and according to the 2017 research of Ditch the Label, more than 20 percent of children from 12 to 20 years old have been bullied on Instagram (Taylor, 2018). It is crystal clear that Instagram is no longer a platform for individual to express opinion as it has been exploited as a tool to bully. In cyber world, teenagers could be easily become a target for bullying as the appearance is often attacked. For example, in 2018, a girl of Norwich school, Mia-Lili Bennett had been bullied on Instagram by attacking her beauty (Geraldine, 2018). A post uploaded with the face of Mia as a picture and started a vote for whether she is beautiful or not, this caused a traumatic mental attack towards Bennett as 53 percent responded “hell ya”. Therefore, the ten years old girl, Bennett had been put on the list of suicide watch to ensure aggressive act do not appear on her. Instagram has been exploited as a tool to execute people.

Instagram is also closely related to the political as it is often used as a warzone for political argument and a platform for expressing political opinion or advertising political campaign. With the increasing number of Instagram users, this phenomenon can be shown in the 2015 campaign of Trump as the political squabbles had shifted to social media. According to the Pew study in 2014, it shows American users had increased from 13 percent to 26 percent from 2013 to 2014 and youngsters from 18 to 29 years old occupied 53 percent. (Aaron, 2015). Thus, Instagram is a powerful weapon and advertisement medium to attract support from young American citizens. In America, normally national politicians exploited Instagram as a page to maintain the image of friendly politicians, such as the New Jersey Democratic Sen who documented his latest diet on Instagram. Nevertheless, Trump attacked Bush for supporting the Iraq War and posted a photo of Jeb’s mother to press him to give up running the election of president. A few days later, Bush posted a 80 second long of video on Instagram to fight back at Trump and had titled “The Real Donald Trump” which added various short clips of showing Trump support increasing 25 percent tax of high income citizen, supporting a single payer healthcare system that functioned well in Scotland and Canada and claiming himself as a “prochoice of every respect”.  In addition, Bush posted an image of a copy from the New York Times that eulogized the former Democratic Speaker of the House Nancy Pelosi with Trump’s signature. As a result, Instagram has become a tool to tease politicians of different political views which turned a social media app of sharing food or scenery into a weapon for political attack. Argument of political is no longer restricted in physical life, with the emerge of Instagram, it offers individuals another way to share their thoughts, debate and attack.

Furthermore, the business model of the Instagram is to earn money through promoting advertisements of certain kinds of brands which is similar to the way how Facebook earning money. The initial aim of Instagram is to be a sharing informal picture community as this app started with a nonprofit goal; however, Instagram introduced paid advertising service, thus famous brands are urged to advertise their products on the platform, such as Nike. From 2013, the business strategy of Instagram has been developed to surpass other informal communication sites and applications through updating new functions, such as photographs and recording transfer, geotagging, live stories and self vanishing stories after 24 hours. According to the Merkle’s Digital Marketing Report for the second quarter of 2018, “advertiser spending on Instagram for the period grew 177 percent year over year and the impressions for Instagram in the same quarter grew by 209 percent year over year. (Ellen, 2018, para 6)” As a result, citigroup analysts analyzed the value of Instagram had rapidly increased from $35 billion to almost $100 billion. In addition, the promoters on Instagram can indicate slideshows and connection to locales outside Instagram which allows individuals to click into another site. Also, companies would cooperate with high number followers of Instagram users as they have a high attention from the public, advertising a product can catch the attention of the followers immediately.  For example, the Love Island star Olivia Buckland was a brand ambassador of the Warprint Cosmetics company, she posted an image of eye shadow with the caption “#BucksBeauty”.  As a result, Instagram has become a platform to advertise products and a tool for internet celebrity to earn money as a lot of brands of company are likely to invite them to advertise their products, thus these changes the traditional way of advertisement. 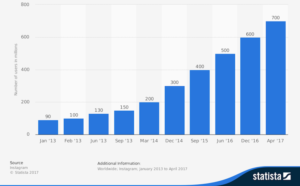 Number of monthly active Instagram users from January 2013 to June 2018.

To conclude, Instagram has transformative impact on the social, economic and political aspects of the society which changes the living style and involved with current social issues. Instagram is not only a platform for individuals to share their political opinions and photos and videos related to personal life, but also used as a tool to advertise. With the increasing number of Instagram users, Instagram has become a part of individual’s life; however, the negative impacts to mental health brought by Instagram are undeniable and should be combated.

Aaron, B. (2015). The political potential of Instagram. Retrieved from: https://www.washingtonpost.com/news/the-fix/wp/2015/02/04/why-the-two-parties-need-to-figure-out-instagram-now/?noredirect=on&utm_term=.febecf8796b9

Nachiket, B. (2018). Instagram Business Model- Everything You need to Know about How Instagram Works & Revenue Analysis. Retrieved from: https://www.ncrypted.net/blog/how-does-instagram-work-insights-into-instagram-business-model-and-revenue-model-of-instagram/

Taylor, L. (2018). Teens Are Being Bullied ‘Constantly’ on Instagram. Retrieved from:  https://www.theatlantic.com/technology/archive/2018/10/teens-face-relentless-bullying-instagram/572164/