NicoNico, or Nico Nico Douga, is the leader of Japanese video-sharing platforms, which leads to a reformation in the video sharing service sites as well as changing ways of the Internet communication environment. This essay will focus on the critical analysis on Niconico’s uniqueness in video-sharing sites through the development of Internet technology, and its influences on the whole industry. This essay is divided into three parts. The first part briefly introduces the operation and historical development of Niconico. And the second part will illustrate Niconico’s business model and online ecology. Lastly the third part focuses on the innovative changing of the video-sharing industries and some potential problems.

Niconico is a Japanese video-sharing service platform, which was founded by Dwango in 2006. Niconico allows users to upload, view and share video clips with the whole website. What makes Niconico unique is that it innovatively creates a special sense of shared watching experience for viewers by allowing them to upload their comments directly onto the video and syncing them to the specific time or scene of the play (Hernández, 2018). Such comments reflect the audience’s immediate response to specific plot of the video and create shared watching feelings. And this makes Niconico become one of the most visited video-sharing sites in Japan and the characteristic ‘overlaid comments’ on videos are widely accepted and spread around the world. 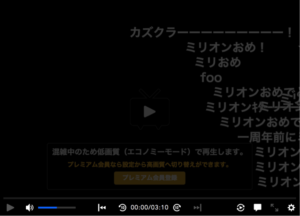 The still of a video on Niconico. Image: Niconico, All rights reserved.

The historical background of Niconico

Niconico began to provide experimental animation services once founded. At first, Niconico did not provide the video upload service itself (Yamakami, 2009). Instead, it just added the function of instant comment subtitles to the videos sourced from websites like YouTube and it had no formal partnership with YouTube (2009). Niconico was eventually forced to close the service as YouTube banned it from accessing its videos in 2007 and after two weeks, Niconico launched the video sharing service its own (2009), which formed the prototype of Niconico video-sharing platform. Also, Niconico expanded its video-uploading service in mobile version by signing contracts with some telecom companies.

After deciding the clear operational direction, Niconico began the development and improvement process by constantly updating the versions to add new features or to make amendments to existed applications. In addition to its most famous live comment feature, Niconico also has several unique features, like Mylist and video category searching. Mylist is a feature that functions similarly to a bookmark list. It allows users to store the videos they like or some comments at specific time of the video in their personal folders. And Mylist can be recognized as users’ database of interest and can be optionally made public to other users or linked to by others. Moreover, this feature can reflect the interactions between participants and published entities, which are two constitutive factors of the social network (Cazabet et al, 2015). And the daily data from Mylist activity can be used to compute the daily ranking view for users to refer to, which further strengthen the internal communication and interaction within the site (Scripps et al, 2007).

The video category searching feature is another representative content database improve the cooperative creation between users. As the videos in Niconico may be of various categories, the category searching feature can effectively help users to filter the content they want. Users are free to associate a keyword to a video and the site will keep the most relevant keywords to attribute this video to a specific category. And users can find the content they are looking for by using direct matching or relevant expressions. This function effectively completes the searching and matching system and bring convenience to the referencing and linking within the site. In addition, it further encourages the cooperative creations with a higher level of freedom as well as more diverse forms (Cazabet and Takeda, 2016). The unique operation mode and innovative service of Niconico have also attracted numerous users from oversea to serve a broader range of users outside Japan. 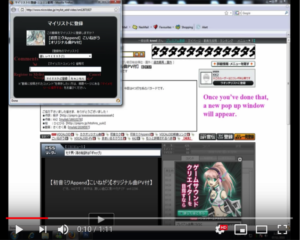 The still of ‘Mylist’ interface. Image: YouTube, Some rights reserved.

In an increasingly digitalized world, online video platforms and video sharing websites, as well as personal media and artists have grown in number, and the digital and social media is developing from the simple model of substitutions or complementarities (Newman, Dutton & Blank, 2012). As the connections in the connected world can bring the solutions of problems and exploitation of opportunities (Looi, 2008), the complex ecosystem is created for Nico Nico Douga to support its operations.

With the special comment system and animation content, Niconico can be characterized as one of the most unique video sharing websites. Originally, users added comments through Niconico to other sites, for instance YouTube, YouTube soon disconnected links to Niconico and then Niconico have to start its own development (Yamakami, 2009). Also, YouTube is the biggest video-sharing website. Thus the main competitor of Niconico is YouTube.

Furthermore, company like Ustream is offering new video services as Niconico does, for example, live video streaming. And this kind of social media service is widely offered by social networking applications like Instagram, for specialized use on smart phones. Additionally, Bilibili is becoming popular in China, which is a video sharing website providing almost a completely same service like Niconico. They are both another notable competitors.

The most major suppliers are its users, who take the role of video creators. One intereating function of Niconico is that users can upload their own video as a derivative creation activity of other videos (Lam, 2016), so new creators might be attracted and more performances will be brought. In this light, the video fans of Nico nico are merging with the creator, formulating a culture of collaboration in the digital context (2016).

Niconico’s core partners include payment systems such as JCB credit card Company and Paypal, for the fee payment of ‘niconico premium’ members. Yahoo JAPAN is also one of the partners that its related ads and services are adopted by Niconico (Yamakami, 2009).

Below can be seen a diagram of Niconico’s Internet ecosystem:

Uniqueness of Niconico’s internal network and its potential problems

What makes Niconico attractive to users throughout Japan and even around the world is the unique internal social network it creates. Firstly, according to Yoshii and Goto (2009, p. 85), ‘commenting plays important roles in the entertainment culture of the consumer generated media’. Commenting is especially significant for video-sharing sites as it facilitates the internal user communication. Users can provide keywords or tags to help to describe the video content and to define the video category by referring to user comments (Ames and Naaman, 2007). Moreover, the feature of commenting can encourage users to express their positive or negative reviews about the video and it also gives space to users’ agreement or opposition with other comments. Such user communication is one of the most basic elements forming the whole online network.

The distinguishing feature of overlaid comments of Niconico can help to prove that commenting can be seen as collaborative creation in an advanced form of user communication and it is consistent with the concept of ‘pseudo-synchronized communication (Hamasaki et al, 2008). Comments of all users can be overlaid directly onto the video content and can be synchronized to a specific video time matching the comment contents, such unique commenting feature aims to provide users a sense of shared viewing experience. It means that it can make users feel like viewing the video together with other users in real time with the assistance of overlaid comments, although their comments were made at different times or even different dates.

In addition, overlaid comments can further promote the cooperative creation between video creators and viewers. And some interesting uses of overlaid comments can add remarkable visual effects to the original video. For example, we can often see ‘barrages’ in Niconico videos where numerous identical or similar comments collaboratively made by different users ae stacked together and they almost completely cover the original video interface. And some skilled users can further combine the different comments or characters to add special drawings to the original video, which can effectively enrich the video content and create more interesting viewing experience for viewers as well. This can be seen as a secondary creation process by users of commenting and it simplifies the creation as commenting is more practical and much easier for users compared with professional video clip or reediting (Cazabet and Takeda, 2014). Thus, the innovative feature of overlaid comments in Niconico can be of significance in motivating the cooperative creation and in creating a more interactive social network.

However, there are several hidden problems existing in Niconico’s social network. First are the side effects of the high-level spontaneous overlaid comment feature. As the overlaid comments are unpredictable to the video creators or uploaders, sometimes they may face with some abusive language or sensitive words. Such uncertainty and fear of being insulted often set barriers for users’ freedom to upload their works to the public. And it also results in higher level of pressure to the investigation and supervision departments of the site. Furthermore, Niconico is often criticized by the public for its copyright issue. As the site allows all users to upload their works, there are possible uploads of infringing or pirated videos. And some users even illegally upload porn videos late at night to contend for attention. Therefore, it is necessary and important for Niconico to take measures to strengthen its control in relevant areas.

To conclude, Niconico’s innovative features in video-sharing services have redefined the cooperative creation process and also have initiated a ‘Niconico-style’ interactive social network. And its representative function of overlaid comments has started a brand-new social networking form and has brought profound cultural shock to the whole industry. However, the rapid development of the new social network form is always followed by emerging issues. It is necessary for large social networks like Niconico to strengthen its internal control and supervision to help them put clearer emphasis on the questions and issues of social networking interactions in the future.

Cazabet, R. and Takeda, H. (2014). Understanding mass cooperation through visualization. In: Proceedings of the 25th ACM conference on hypertext and social media, pp. 206–211,

As one of the most visited video sharing websites in the world, YouTube’s profit mode and unique interactive experience, this paper will mainly study YouTube’s business model and how YouTube has changed modern society and […]

Search Engine: From History to Present

Introduction This thesis will explore the “search engine” as the historical development of the internet invention and related social context. Although the search engines are frequently thought of as began from 1990s only, it quickly […]