YouTube stands alone as a platform that has redefined user-generated content and the internet landscape. From humble beginnings, the video-sharing website has attracted billions of users globally, with an information database that covers endless areas of content.

It has become the world’s largest video sharing platform, with over a billion hours watched every day. YouTube stands as a global phenomenon, a platform which has revolutionised creator content, consumerism and popular culture. Responsible for the infamous ‘vlogger’ archetype, the website has innovated our involvement with media and digital cultures, allowing individuals to pursue high-earning careers directly funded by the viewers who watch them.

YouTube has transformed our modern interactions with the internet, providing a constant stream of entertainment and content for users to watch and popularise. The accessibility and universality of YouTube has revolutionised our ability to generate content and interact on platforms with endless possibilities. In the age of information, YouTube has allowed us to reach new sharing capabilities in regards to politics, celebrity, gaming and advertising, culminated in the 400 hours of content uploaded every minute. Its cultural and social effects are matched by its political and economic impact, making YouTube a behemoth of contemporary internet culture.

YouTube is defined as a video sharing platform, purely operated and used by creators and consumers on the website. As its growth has accelerated, it has become more than a ‘meme’ sharing site, or petty popular culture videos, instead funding its own movies and tv shows and supporting full time careers.

Its success story began in 2005, when 3 PayPal employees came to the realisation that there was no singular platform for video sharing on the market. In part catalysed by the Boxing Day Tsunami and other cultural phenomenon. It was acquired by Google in 2006, where it reached unprecedented growth, averaging 100 million views a day. In 2007, YouTube’s prevalence was so great that it “consumed as much capacity as the entire internet took up in 2000”. The sheer volume of content uploaded and consumed transformed the internet, where individuals globally now had space to create and share whatever they liked.

The following several years continued to build YouTube’s success and influence. They made the upgrade to high definition video in 2009, whilst regular creators and gamers began to examine the potential of the site as more than regular sharing. The popularisation of ads solidified the possibility for people to create well-paying careers by adapting their content to user preferences. Garnering three billion daily views mid-way through 2011,YouTube’s numbers continued to prove its overwhelming success on a digital market. Its foray into politics with a live stream of the presidential debate showcases its ability to affect all areas of cultural significance.

So, how did YouTube become so influential? Its unprecedented numbers reflect how necessary it was to have a purely video sharing platform available. In the first decade of the 2000s, our digital-focused culture and tendency to record and broadcast monopolised how we used the internet. By creating a platform which allowed users to create and share their content, YouTube filled the gap in the market, where other social media sites such as Facebook were overloaded with different material. By streamlining the site into purely video sharing, YouTube invited a global audience to participate and produce an endless supply of subject matter.

How does it function?

Bought by Google in 2006 for $1.65 billion, YouTube has flourished financially, seemingly on a never-ending and infallible escalation. As a Google subsidiary, the exact specifications of its current worth is undetermined, yet it is surmised that the internet giant could be worth over $70 billion. Nearly all of YouTubes revenue comes from ads embedded across the platform and within videos, with the estimated figure for 2017 sitting at around $13 billion.

So, how does a free platform like YouTube generate so much income? Its advertisement revenue is so successful because of the sheer numbers of users interacting with the site. In this sense, users become the product YouTube is selling. By utilising a variety of targeted and sponsored advertising, the platform can forgo user and creator fees, ultimately making the platform more accessible. Embedded advertisements, placed before and during a video, integrate themselves into the viewing experience to minimise intrusion. Similarly, ‘landing’ page ads are presented as banners across the home page of the site, which generates the most profit and is the highest paid advertisement on the site.

This structure is beneficial in attracting a user base built of a pre-existing and successful platform, “without expending resources on costly ad campaigns”. The amalgamation between a ‘freemium’ and a traditional advertisement base account for the rampant financial success of the platform. 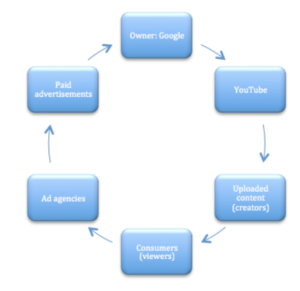 How exactly does it work?

YouTube has a fortuitous place in the internet landscape as both an industrial and social heavyweight.  It functions as a platform that simultaneously provides jobs and entertainment, a self-fulfilling life cycle of creator content that is watched and funded by the users who engage with it.

It is well established that the creator-viewer relationship is integral to the structure of the platform. Aside from paid ad campaigns, the primary partners of the website are the creators who upload content. This means that YouTube doesn’t have to provide their own goods, and rather offers their services to the people that will. The YouTube Partner Program is the system which allows creators to monetise their videos. As of early this year, the requirements have changed, where new applicants must have over 4,000 hours of video watch time on their channel, and 1,000 subscribers to apply for ad revenue.

These stricter new requirements make it more difficult for aspiring creators to start a paying career on the site. However, it protects YouTube’s interests and the ability to revise and confirm that channels are appropriate for ad placements, instead of risking the proliferation of scammers and unsuitable content.

Does it have competitors?

YouTube’s competitors are mainly other video-based websites, although most platforms fail to provide the exact appeal that YouTube has garnered. Higher budget services such as Netflix stream a wide range of movies and television, as well as creating their own entertainment content in the same fashion as a typical studio. Of course, this fails to encapsulate the ‘everyday’ element of YouTube culture, where any individual can contribute their videos to the site.

DailyMotion has followed a similar timeline and business model as YouTube, utilising advertisements to create revenue, but has failed to create a culture of internet celebrities or ‘influencers’ creating new content on the site. Its lack of community and celebrity culture makes competitors like DailyMotion “just an alternative”.

The regulation of content has quickly become one of the larger issues YouTube has had to face since its inception. With such endless content being uploaded every hour, there are videos which violate the site’s guidelines whilst remaining undetected, and generating ad revenue. A shockwave was sent through the internet community this year with the Logan Paul video controversy, where a creator posted footage of a dead body in a forest. After the video had gained millions of views before it was taken down, YouTube was forced to crack down on their regulations, with the CEO saying “we are planning to apply stricter criteria, (and) conduct more manual curation”.

The Logan Paul incident reflects the difficulties in regulating every aspect of the platform. By tightening guidelines on content and enforcing stricter ad policies, the new standards can “prevent potentially inappropriate videos from monetising”.

What has it changed?

YouTube is one of the internet’s great success stories in the same vein as Facebook, a revolutionary platform that gives its users the power to tailor their own experiences. It has transformed how video on the internet is shared and viewed, as well as playing a role in breaking news and sharing cultural phenomena on a global scale.

Socially, YouTube has reformed how we relate to one another online. What began as a tool for sharing viral videos and snippets of everyday life has created internet superstars, celebrities in their own right who act as mentors and personalities for their viewers. The proliferation of these famous creators has set YouTube apart from similar platforms without the same influence. YouTubers like PewDiePie, with a record-breaking 69 million followers, command an unprecedented social influence, with the capacity to impact several generations of viewers.

However, with every global platform comes a downside. With the sheer number of videos being published every hour, there will always be unsavoury or false content circulating the website. As Naim (2007) posits, “the YouTube effect has brought other mixed blessings. It is now harder to know what to believe”. This implication is minor in the scheme of YouTube’s size and expansion, whilst the introduction of political coverage connects the platform to a wider sense of social justice and awareness, going beyond mere video sharing.

As a business model, the structure of YouTube is relatively straightforward. Paid advertisements across the site and embedded in mid-reel video slots create the significant revenue, whilst established creators are commissioned by external brands for profit, going above the traditional YouTube Partner Program. It is unlikely the business model will progress further than its ‘freemium’ introduction of paid subscriptions, which elevate the business whilst keeping its traditional structure. Considering “YouTube’s DNA is in free video with ads, and that’s difficult to change”, it has been very effective in outsourcing its content to creators, whilst maintaining an overwhelming profit from ad partnerships.

Additionally, YouTube has also played a role in stimulating cultural conversation and change. The distinctly creative opportunities presented through the video-sharing platform allow for users to send critiques and messages about the current world in an engaging manner. The It Gets Better movement was started through YouTube as an anti-bullying movement directed at vulnerable LGBT teens.

Where young individuals can often feel discouraged or alone, an international community like YouTube has the power to mobilise a social change. The It Gets Better project became an international force of community, with dozens of videos being uploaded in solidarity, including the White House. YouTube’s cultural significance is an important factor in considering the entity as a positive force on the internet, and its reimagining of social interaction.

In summary, YouTube represents a new era of interaction and sharing online. Its billion dollar revenue and status as the second highest trafficked website in the world cement the platform as a global phenomenon. As argued by Hilderbrand (2007) in the early years of the site,  “the swiftness with which the stakes surrounding YouTube have changed in its first year and a half demonstrate just how difficult it is to rigourously access cultural and technological developments in their present moment”. YouTube successfully provides the opportunity for creator and user symbiosis, where the content of the platform is generated from an individual level. It has transformed how we share video online, and subsequently the spread of cultural conversation, breaking news and even politics. It is difficult to imagine a world without YouTube, as it culminates a unique combination of content, changing the way we interact with the internet our view of the world.

Ashcraft, B. (2018). YouTuber Apologises After Uploading Footage Of Apparent Suicide. Retrieved from https://www.kotaku.com.au/2018/01/youtuber-apologies-after-uploading-footage-of-apparent-suicide/

Dutta, A. (2017). How Does YouTube Make Money? Retrieved from https://www.feedough.com/youtube-business-model-how-does-youtube-make-money/

It Gets Better Project. (2010). Retrieved from https://itgetsbetter.org/

Lardinois, F. (2012). YouTube partners with ABC to offer its first-ever live stream of the presidential debate. Retrieved from https://techcrunch.com/2012/10/01/youtube-partners-with-abc-news-to-offer-its-first-ever-live-stream-of-the-u-s-presidential-debates/

‘Nah, let’s just get an Uber’. The rise of Uber as a worldwide phenomenon

Uber has rapidly become one of the most common forms of sourcing transportation, in particular in our city, Sydney. Its growth has seen millions of people participating in the culture of Uber.

News being socially shared: its origins and implications

WeChat has become one of the social communicational media platforms in the digital market of online interaction and connection between customers. It maintains the social relationship core chain and coordinates the strength through the social […]