Skype has emerged as an innovative telecommunications tool which helped connect users around the world. In the past fifteen years, the service has rapidly gained widespread popularity and changed the Internet telephony market. In what ways was Skype a transformative software in communications technology?

This essay will first examine the historical background of the development of  Skype, its business model and ecology, before addressing the transformative effects of the Skype protocol on the communications landscape. Finally, this essay will then analyze the social and political impact of Skype and the regulatory issues at hand.

Skype is an computer application software that offers video chat and voice calls via the Internet and to regular telephones (Skype, 2018). It also provides other services such as instant messaging, file transfer or group calling. Users can easily download the application onto their computers or mobile phones via the website and use for software for both personal or professional use.

The system functions as a voice-over-Internet-Protocol (VoIP) which transmits voice data over Internet Protocol (IP) servers. Skype effectively managed to popularize this burgeoning technology for day-to-day online calling. It is estimated that as of October 2018, Skype has around 300 million monthly active users (Statista, 2018).

Skype Technologies S.A.R.L. was founded in Luxembourg in 2003 by Janus Friis and Niklas Zennstrom, in collaboration with Ahti Heinla, Priit Kasesalu and Jaan Tallinn who developed the Skype software. In 2005, eBay acquired the company for 2.5 billion US dollars. That same year video telephony was introduced. Skype’s market value rose steadily. By 2006, Skype was used for seven percent of long distance calls (Li, 2006). In 2011, Microsoft Corporation bought Skype for 8.5 billion dollars. Since then, Microsoft introduced a number of new features and transitioned Skype from peer-to-peer (P2P) to a centralized Azure service. The shift from P2P to a server-based system allowed for greater stability and less bandwidth strain. Microsoft also sought to expand the brand’s strategy for it to become more business-focused and capitalize on their premium services. New versions are continually released to improve call quality, as well as software reliability and security (Microsoft 2018).

Skype operates on a freemium business model, meaning that while its basic services are free of charge, additional features can be purchased by the users. The platform profits from competitive rates for calling landline or mobile phones over traditional telephone networks. A range of options are available to attract different customer profiles, from monthly subscription to pay-as-you-go options. Users are also able to get a Skype phone number to receive local or international calls in exchange of a monthly fee (Skype 2018). The company has also sells business features such as screen or file sharing. This allows users to first test the software before adding any other features that best suit their needs, as well as pick and choose among these services.

Skype has changed ownership several times and is now fully incorporated into the Microsoft engine. Microsoft continues to integrate Skype into new products such as the Xbox One,  and improve its voice recognition software. The company also invests in emerging technological projects that ally artificial intelligence (AI) and conversational computing. For example, AI was incorporated into Skype Translator, which is able to translate calls into thirteen languages. Skype has recently partnered with companies such as Expedia.com, Hello Hipmunk and StubHub that would provide personalized experiences, direct calling as well as travel or event planning through the Skype interface. The company also plans to introduce a bot that would teach users new languages.

An internet ecology refers to an organized system of interaction between agents who rely on information technologies (Looi, 2001). Skype’s ecology is composed of the millions of individual customers and business who use the service; the owners, developers and partners of the firm; national regulators. It also relies on the companies who produce the computer hardware (see infographic below).

In the past decade, Skype witnessed a significant rise in competitors with a flurry of communications applications that are now flooding the market, such as WhatsApp (1.5 billion  active users as of October 2018), Facebook Messenger (1 billion users), Viber (260 million users), Apple’s FaceTime or Google+ Hangouts, as well as other VoIP platforms. These applications have all incorporated text, audio and video features with different interfaces. WebRTC technology has also seen a rise in recent years as a new form of multimedia communication which can be directly incorporated into the Web browser. 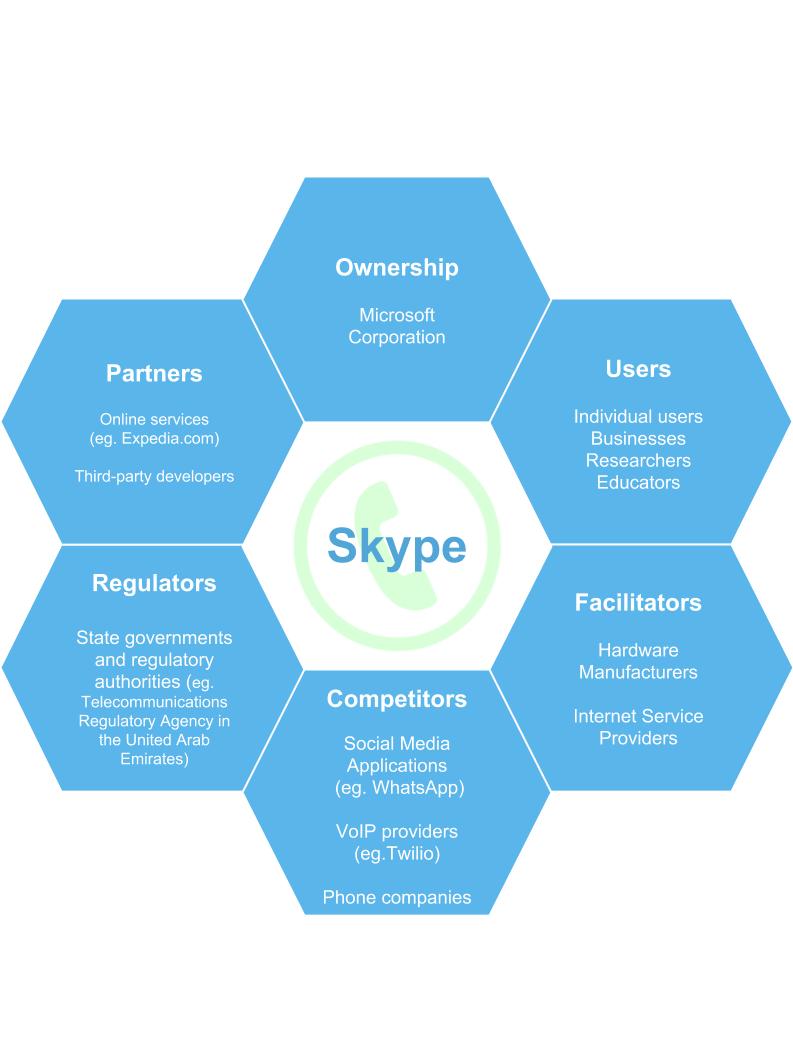 A “disruptive innovation” is a new technology that has lower cost and performance  than the dominant design and moves away from the mainstream technologies (Christensen 2006). The key features therefore include affordability, simplicity and the replacement of large actors by smaller entrants (Chandre and Yang, 2011).

Skype has emerged as a competitor to major phone companies by replacing the traditional phone call with rapid and cost effective online calls. As a peer-to-peer multimedia software, Skype functioned on a shared network with an unlimited number of members who could join and connect freely using different devices. The service substantially cut down the costs of international calls. By 2014, it accounted for 40% of the International call market. Its interface and built-in tutorials made it relatively simple to use and widely accessible.

Skype managed to combine two sets of  incremental innovations that were disrupting the telephony market at the time of its release: Voice-over-IP (VoIP) and Peer-to-Peer  (P2P) computing (Rao, Angelov and Nov, 2006). The VoIP system allowed for instantaneous calls through data transmission over an IP network. In addition, the Skype protocol originally featured a combination of P2P and client-server systems. Connections within these unstructured PSP networks are formed through equivalent nodes that benefit from a larger number of peers (Zulhasnine et al., 2013; see Figure 3). Although Skype was not the first technology of its kind, the disruptive aspect lied in its innovative protocol and the timing, which coincided with the growth of the Internet.

Skype rapidly evolved into a global telecommunications tool. It expanded the IP telephony market by opening up the possibilities for online interaction. The social networking application helped usher the era of instantaneous communication  through the Internet which has now become commonplace. It also contributed to the development of videotelephony and the spread of new norms for building and maintaining social relationships.

Individual users could download the software for their personal use, in particular long distance calls between friends and family. The service notably allowed people to build personal relationships and stay in contact. It soon became an iconic brand with a verbified name A study conducted by Stanford University and Nokia Research in 2010 observed that one third of divorced families used video chats to communicate. The study also found that families incorporated Skype in their weekly schedules or used it to connect grandparents with their grandchildren (Ames, Go, Kaye, Spasojevic, 2010). In contrast to regular telephone calls, video chats appeared to be more engaging than simple voice calls and help strengthen personal interactions. It became easy for anyone with Internet connection to connect with others around the world.

Skype has also become a prominent software for business, education and research in diverse fields. Skype for Business was developed as a collaborative tool for developing professional relations. Communications is at the heart of ecommerce, and Skype was able to transpose and adapt the work environment to the online world. It also encouraged freelance work and overseas partnerships by facilitating business communication. Some employers also use Skype to interview job candidates. Businesses are thus able to bring together their workers, clients and partners to work together through the online space, in a cost-effective manner.

The software could also be used for educational purposes, as a means of connecting people around the world. It showcases greater potential for collaboration and cross cultural learning. Group interaction such as video conferencing can motivate students and encourage collaborative work (Sivula 2011; Chan, Frydenberg and Lee 2007). Communities living in geographically diverse locations and remote areas are thus able engage in cross cultural learning. Researchers also use Skype for qualitative interviews (Iacono, Symonds and Brown, 2016). A study also showed that Skype could potentially be used to provide clinical supervision (Bruce, Byrne and Kemp, 2017).

In an increasingly interconnected world, Skype proved to be a useful tool for establishing contact with people in a way that is both time and cost effective. Skype provides new opportunities for social interaction through a synchronous connection at a relatively low cost. Users are thus able to transcend geographical, economic and political borders. The development of the networking service and the introduction of videotelephony in 2005 vastly changed the norms of communication and introduced new standards for calling and video chatting. Although online connection cannot entirely replace face to face interaction, this method of communication proves to be a viable alternative for people who wouldn’t be able to meet otherwise.

Users may encounter technical issues while using the software. Audio or video can sometimes be delayed or not working. The dreaded “low connection” signal and low quality calls may also be sources of frustration and complaints. VoIp requires internet connection and an optimised system of routers, servers, cables and switches. The required installation of a third-party software may also appear out-of-date compared to other applications which are available online. The redesignings of the user interface are not always met with positive responses from the customers.

In addition, the use of the Skype network raises security concerns. A 2005 study found that it is possible to break Skype’s encryption and reveal personal identification information (Wang, Chen, Jojodia, 2005). Skype faces increased regulation from institutional bodies, for example the European Commission, to conform with data protection regulations. Starting from 2010, Microsoft was criticized for complying with a government surveillance program in the United States by allowing the National Security Agency to access private communications of Skype users.

Moreover, Skype has encountered legal issues and dealt with lawsuits for intellectual property infringement on some of its products. Governments have also banned Skype in an attempt to control telecommunication in their barriers. For instance, Skype along with other VoIP services were banned in the United Arab Emirates in favor of licensed national providers. In 2005, Skype cooperated with the Chinese government in implementing an Internet censorship system with the introduction of a ‘modified’ and filtered version. The companies involved in these policies were criticized for profiting from restrictions on freedom of speech and freedom of the press.

Skype undoubtedly disrupted the communications industry when it was first introduced in 2003. This innovative tool introduced new ways for users to interact and make social connections. Instantaneous messaging and calling have now become ubiquitous in the Internet social sphere. Skype continues to evolve with each new version. However, Skype is no longer considered as ‘disruptive’ or ‘avant-garde’ as its was before. Its appeal appears to be diminished as it is overshadowed by other popular apps with similar features. While its novelty may have already faded, Skype has certainly played a role in ushering the era of online interconnectedness.

Statista (2018) Most popular social networks worldwide as of October 2018, ranked by number of active users (in millions). Statista.com.

Wilhelm, Alex (2013) Microsoft brings Skype and multi-party video chat to the coming Xbox One, In ‘Microsoft’, The Next Web.

Yeung, Ken (2013) Skype is 10 years old, and in the past decade its helped transform the way that we communicate, In ‘Microsoft’, The Next Web.

Screenshots of the Skype for Windows 10 user interface. Software downloaded at: https://www.skype.com/en/get-skype/

A Future of Blended Boundaries

In today’s day and age, technology surrounds us and plays a major influential role in our individual lives and society. There is a continuous stream of technological advances and innovations, constantly changing and shaping our […]

An Introduction Tor is an internet browsing service which encrypts user data and allows anonymous browsing – which traditional internet infrastructure does not. This technology, since its introduction, has had a variety of positive and […]