Airbnb and the Sharing Economy

Airbnb, Inc. was founded by Brian Chesky, Nathan Blecharczyk and Joe Gebbia in 2008. Originally named as AirBed & Breakfast, Inc. the company was designed to not only allow people to quickly book accommodations online, but also give them the opportunity to earn money by providing that accommodation (Company Overview of Airbnb, Inc., 2018). Such form of sharing economy is called a peer-to-peer (P2P) accommodation service with companies such as Airbnb and Uber situated right at the forefront of this flourishing industry. Prior to the emergence of P2P accommodation people relied on commercial-based establishments, such as hotels, hostels and motels. Hence, the entire tourism industry was largely economically reliant on such establishments. However, with the rapid rise of the sharing economy, people were suddenly posed with a wider range of options.

Contrary to popular belief, Airbnb was not the first platform to offer P2P accommodation. Before Airbnb, there was CouchSurfing – a platform that also connects hosts to different people; however, unlike Airbnb, the hosts are not allowed to charge for the service. Initially a non-profit organisation, they soon realised a major flaw in their business plan, and started to charge their customers to get certain perks within the website, such as account verification and easier navigation through the website (Stay with Locals and Meet Travelers, 2018). Such phenomenon opens up and interesting question: will sharing economy soon become completely commercialised? And if so, what are its social and economic implications? The current paper attempts to answer this question focusing on both the potential ramifications associated with sharing economy, as well as, the positive social and economic impacts of Airbnb.

Since 2008, over 400 million individuals chose Airbnb over more traditional forms of a tourist accommodation with over 5 million individuals opening up their homes to complete and total strangers (About Airbnb, 2018). However, what exactly motivates such individuals to choose this service over a hotel? While Guttentag, Smith, Potwarka and Havitz (2018, pp. 343-344) attribute Airbnb’s success to its economic benefits, they also acknowledge people’s curiosity and willingness to try out new brands being crucial to the brand’s rapid growth. In fact, people are starting to become more open-minded and not only aware of the financial benefits of sharing, but also the detrimental effects of overconsumption on the environment (Botsman & Rogers, 2011). Liu and Mattila (2017, p.33) argue that the local’s accommodation not only creates a sense of uniqueness, but also belongingness. However, like every technological innovation, Airbnb also carries a number of serious implications.

The sheer notion of trusting a stranger to house you in a foreign country is a questionable decision in itself. This is why Airbnb implements various strategies in terms of their website design, the online review system and the brand in general to create a certain sense of perceived security. Such brand validation increases one’s trust in the brand creating loyal customers. Perceived security is a notion that started to become quite prevalent with the emergence of online shopping (Yang, Jun and Peterson, 2004, pp.181-182). The users had to completely put their trust into not only the legitimacy of the website, but also the quality of the product. They couldn’t see the physical store, touch the product or see where their money was going; all they had was the “feel” of the website that created a certain sense of perceived security.

This feeling is only reinforced by the platform’s resemblance to a social media site. Each user is required to write a short “bio” about themselves, explaining their personality, interests and reasons for travelling/hosting. Most importantly, however, they are advised to include an image of themselves in their profile, as a form of identity verification. Such small detail also reinforces a sense of a personal exchange between two real individuals creating a sense of intimacy and exclusivity.

However, it was also argued that a mere photo influences the users’ decisions. In fact, it was found that the host’s perceived trustworthiness is largely influenced by their visual attributes along with their reputation, which was mediated by guest reviews. Not only the hosts’ attractiveness gained them more offers, but the study also revealed a possible gender bias where females got more offers than males (Ert, Fleischer & Magen, 2016, p. 71-72). Edelman and Luca (2014) investigated the effect of the hosts’ race on the price of their homes. Quite shockingly, they found that African Americans charged significantly less for their accommodation in New York City than Caucasians whose property was of approximately the same value. Airbnb, along with other tourism-related platforms such as Couch Surfing, must be aware of the inferences their users make simply based on photos. Whether such inferences are conscious or unconscious, they have a significant impact on the users of the platforms. Thus, Airbnb must aim to create a system that reduces the possibility of such biases.

Influence of host’s photos on their success, by Ert, Fleischer & Magen (2016)

Implications for Travellers and Hosts

Although the above techniques do create a sense of perceived security that somewhat validate an individual you come into contact with, past cases have demonstrated that they are not the most accurate representations of the users’ characters. Recently an Airbnb host from New Zealand has been convicted of installing cameras in shampoo bottles, in order to film 34 women showering while staying at his property. He then proceeded to post these videos on a porn cite where these women were exposed and objectified (Mitroff, 2018). They were shamelessly taken advantage of and humiliated in a place they thought was perfectly safe and by a man who was staying with them… along with his wife and two children.

However, travellers are not the only ones who have had negative experiences with the platform. On October 28, an Airbnb host, Alavia Khawaja, shared a frightening story of a guest who not only stole $500 from her, but then proceeded to text her and stalk her. While the police held him for only 24 hours after he showed up at her doorstep with allegedly three weapons, Airbnb took about two weeks to delete his account (Thiagarajan, 2018). Issues such as these arise from not only the perceived security associated with the app, but also its location-based nature. Not only are you agreeing to meet a complete stranger, but unlike dating platforms such as Tinder that also bear such uncertainty, you are inviting those strangers into your own home. While blocking someone on a dating app is quite simple, once your location is shared with a stranger you cannot take it back. 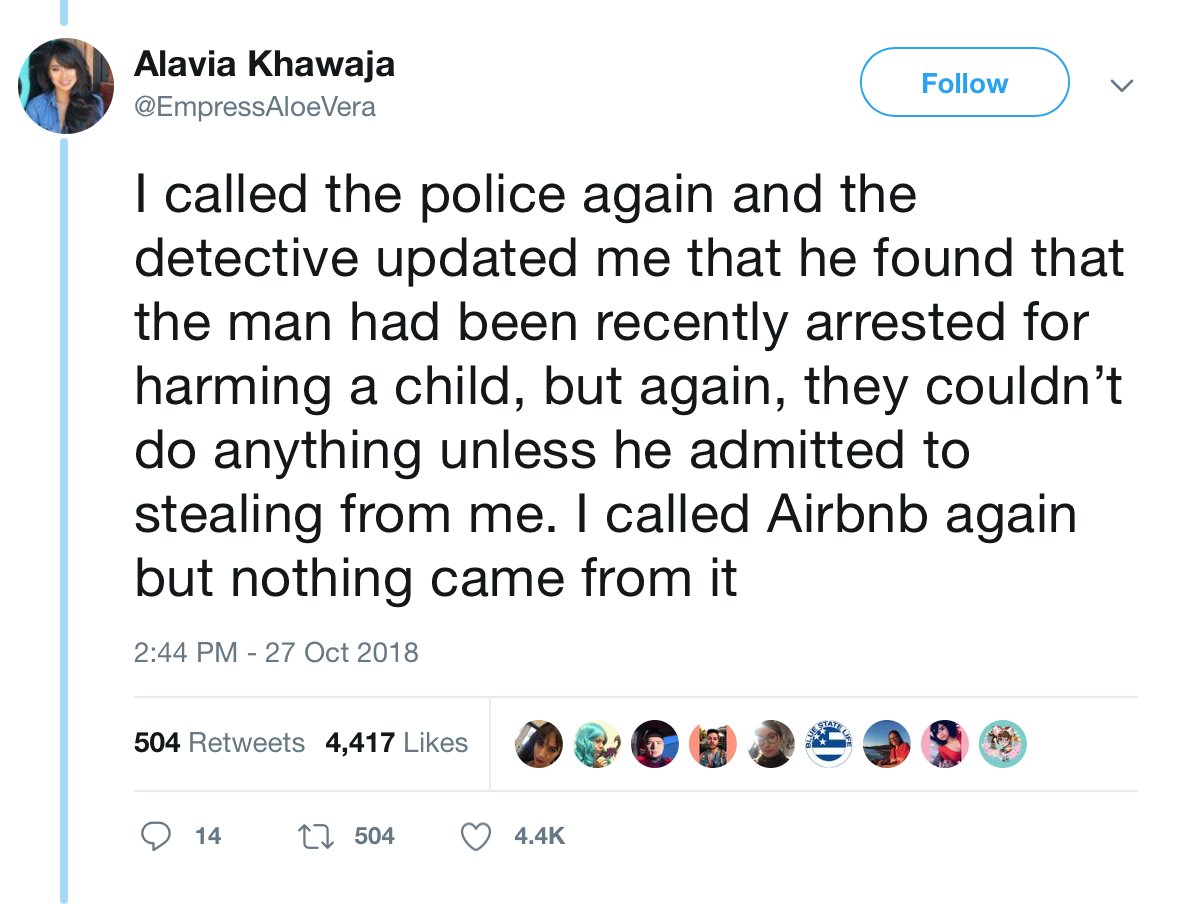 Such cases raise questions about the rights of Airbnb’s users, as well as, the platform’s regulation methods to eliminate, or at least lower such unacceptable behaviour. As listed in the EU Charter of Fundamental Rights, privacy is considered as an established human right and also encompasses data protection (Karppinen, 2017, p.3). Without careful regulation and evaluations of its users, Airbnb has the potential of becoming a platform that cultivates offensive online behaviour, or as in Massanari’s (2017, p.333) words – “toxic technocultures.” As stated by Malhotra and Van Alstyne (2014, p.27) platforms are much better at detecting questionable behaviour than governments. Some of the strategies Airbnb may use to increase their users’ safety is running background checks on the service providers, as well as, responding quickly to conflicts. Past cases have shown that customer service is quite lacking in that regard, and what would one do if they are in a foreign country? Taking responsibility for their customers’ safety will certainly enhance their overall experience increasing the brand’s desirability.

While some may view the freelance nature of such platforms as appealing, it is not always economically beneficial for the user. Such micro-services effectively take care of the present without covering the individual’s future. The individual who lends their place does not acquire new skills, healthcare benefits or retirements through this arbitrary job. However, such downside can be fixed. Governments should work alongside companies such as Airbnb to support sharing economies. Amsterdam has already begun this movement by getting hosts to pay income and tourist taxes (Malhotra & Van Alstyne, 2014, p. 25-27). This decision ensured the hosts’ security for the future and also established the fact that internet platforms are still within the laws of their countries. Another method is much simpler and involves hosts not relying on Airbnb as a primary source of income.

Although there are certain economic downsides of Airbnb, there are also visible benefits. PWC (2014) estimated global annual revenues of Uber and Airbnb of about $15bn predicting this number to rise to $335bn by 2025. Airbnb undoubtedly opens up more opportunities for tourism. Although some may argue that Airbnb harms the hotel industry, hotel executives have previously dismissed that statements on the grounds that Airbnb caters to a different kind of audience. Airbnb have also endorsed that point of view stating that 70% of the property listings are situated outside the main hotel districts (Zervas, Prosperio & Byers, 2017, p. 678-679).

Airbnb also gave rise a significant number of start-ups designed to enhance the overall experience of the platforms’ users. NoiseAware created a sensor specifically for Airbnb hosts that is designed to alert them if their guest was having a party. Unlike a regular microphone, their device does not invade the guest’s privacy, but records the overall noise levels that are sustained for certain time periods. AirAdvance, on the other hand, provides financing to well-reviewed hosts allowing them to run their small business. Airbnb users have evidentially identified the its downsides that significantly affected their experience with the platform. This then resulted in n incredible amount of businesses emerging to complement its affordances while enhancing its usability. Perhaps, the answer to the safety issues around Airbnb lie in a service that connects its users to the local police system. The Airbnb ecosystem, as a whole, is not a complex one at the moment. It consists of:

Hopefully in the future more businesses will be attached in relation to customer safety. 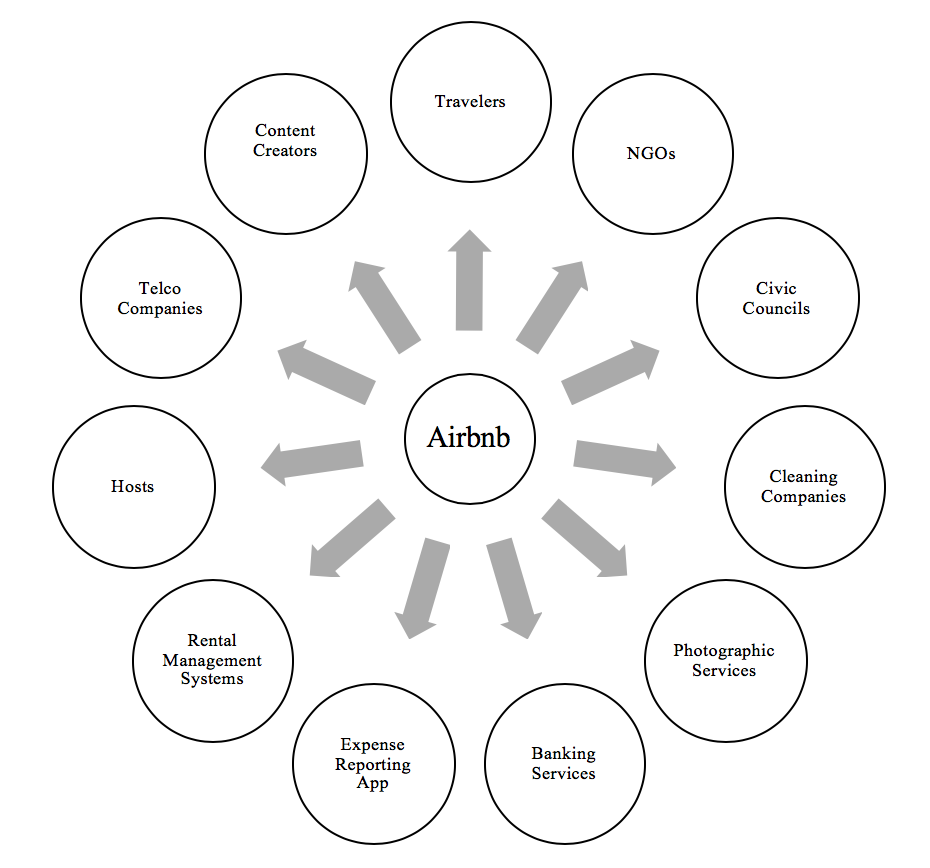 Although there have been apparent downsides and challenges associated with the sharing economy of Airbnb, and in particular, the issues concerning the privacy and safety of its users, this platform does have a number of significant positives. Airbnb not only contributes to the tourism industry, but it also allows individuals to gain income by sharing what they already have. In most cases people do not become victims as a result of cyberstalking – they meet very interesting individuals who open their minds to new cultures and ways of thinking. People get a taste of what it is like being a local, as opposed to a tourist. If Airbnb could recognise its main weaknesses and work towards making the platform a safer place, it would not only enhance the experience of their current customers, but also attract many and many new ones.

Airbnb is one of the key players that popularised the notion of sharing economy. People are becoming more adventurous when it comes to trusting new brands; however, the reason for its popularity could lie in us gradually losing connection with the real world. Hotels are often so impersonal, and Airbnb offers you an option of stepping out of your comfort zone while still feeling like you are at home.

Airbnbcitizen. (2018). About Airbnb Advancing home sharing as a solution. Retrieved from

Couchsurfing. (2018). Stay with Locals and Meet Travelers. Retrieved from

of the Sharing Economy… and How to Lighten It. Communications of the ACM

Massanari, A. (2017). #Gamergate and The Fappening: How Reddit’s algorithm, governance,

McCleery, A. (2018). Pervert Airbnb owner who filmed guests in the shower using secret

Porter, J. (2018). This sensor will alert your Airbnb host if it thinks you’re having a party.

Thiagarajan, T. (2018). Airbnb Guest Stalks After Stay, Comes Over to Her Home with Three

the Impact of Airbnb on the Hotel Industry. Journal of Marketing Research LIV, 687-