In order to make career, it has almost become a requirement to have and actively maintain a LinkedIn profile. Business cards are old fashioned, you connect on LinkedIn instead. With a market value of nearly thirty billion, LinkedIn has proven itself to be the unmistakable leader in the world of digital career making and networking. But how and when did this website came to be one of the internet giants and reshape the industry?

LinkedIn, why would you want it?

On LinkedIn, people can create a profile which essentially serves as an online CV and network, and by creating a network with others it will recommend jobs that would suit you well, as well as allowing recruiters to find and reach out to you. Furthermore, it is also a great way of checking up on career advancements of friends, colleagues, and acquaintances,

So is LinkedIn just the Facebook of careers? Yes, well almost. In many ways it is. It lets you connect with other people that you barely know or only have spoken once to, so in that way it is.

While Facebook is particularly focused on facilitating personal self-presentation, LinkedIn’s interface caters towards the need for professional self-promotion

LinkedIn allows for two profiles, a free one, or a premium one. There are several premium features being offered that arguably makes job hunting easier, namely:

These premium features are exclusive for the users who are willing to pay the extra fee. With a very aggressive mailing campaign, which I personally consider annoying as they bombard my inbox even after opting out on most mails, they try to convince free users to upgrade. For example, a key feature of linkedIn is having insights in who views your profile, they will send a mail that gives you a very limited sneak preview, followed by some blurry pictures, leaving you wondering who else viewed your profile.

Another key insight that LinkedIn offers is insights in the salary that a certain position should offer, allowing the user to reason about an expected salary. In the old days, you’d have to discuss this sensitive topic with colleagues, which is often taboo.

LinkedIn finds it’s root in Mountain View California (just like Microsoft, Google), were it was founded in late 2002 by Reid Hoffman with the help of old colleagues from PayPal and Socialnet. Growth was slow in the beginning, but with new features and improvements attention was drawn from both investors and people looking to improve their network, and in 2004 it had a user base with over half a million people. It was only in 2005, when they had established a solid user base that concrete business lines were introduced.

Over the last decade, linkedIn has become incredibly large, and as of right now they have over five hundred billion users.

Job hunting and networking before and after LinkedIn

Before LinkedIn, the career and networking culture looked significantly different. The only way of “materialising” a new connection was by exchanging business cards or the good old handshake. But what is crucial is that you could not boast your network in this way. LinkedIn is all about having the connections that matter, and having a large pool of connections is something that is considered to be a status symbol by many, similar to showing off on Facebook about having many friends.

With LinkedIn, job advertisement are carefully selected by an algorithm that looks at your skills, previous position, and your connections amongst other factors. But before LinkedIn existed, finding a job that was right was an entirely different process, you needed to have the right connections. Newspapers used to be the best place for companies to post advertisements, as it was easily the most convenient way to reach a large audience. Regional papers were also ideal to reach local potential employees. However, the drawbacks of using the papers is that the audience reached is often significantly larger than desired. Job hunting with these means used to be a slow process (Wadauer, S., Buchner, T., & Mejstrik, A. 2012)

The internet has opened up a lot of ways for “researching” somebody, as tons of information can be found online, of which most we’ve voluntarily shared. Research has pointed out that public information on social networking platforms like LinkedIn and Facebook are often analysed by recruiters and taken into account for the selection process (Caers, R., & Castelyns, V. 2011). People should be fully aware of this, to avoid any conflicts. For example, you want to make sure that you act professionally on LinkedIn, and it might be a good idea to refrain from posting or sharing any political content, as this could potentially influence future applications and opportunities. Before, this information wasn’t readily available to anyone with some search skills, but now it is something that you should consider before every single thing you post online.

The monopoly of LinkedIn

As of right now, LinkedIn is by far the most prominent player on the market, with no serious competition coming close from any side whatsoever. It has integrated so deeply in the job hunting and networking game that it is often expected or even required for applying for a position. When a platform has captured the lion’s share of the market, new users might feel like missing out if they would not join the party. LinkedIn is even that important, that entire courses are available that help you perfect your profile page

2016 marked a massive milestone for LinkedIn, when Microsoft purchased the platform for $26.2 billion usd. To date, this purchase was the largest acquisition ever by Microsoft. What was significant about this deal was that LinkedIn would essentially remain untouched by Microsoft, even keeping Jeff Weiner the CEO.

So why would Microsoft make this deal of astronomical proportions? It is said that Microsoft aims to deeply connect LinkedIn with its own services. Think about things like making Skype the default conference calling platform (which it might already be). But what might be worrisome is how the software giant has become a monopoly in the software field, and how they solidify this position even further.

In the infographic below the true size of LinkedIn is clearly illustrated. 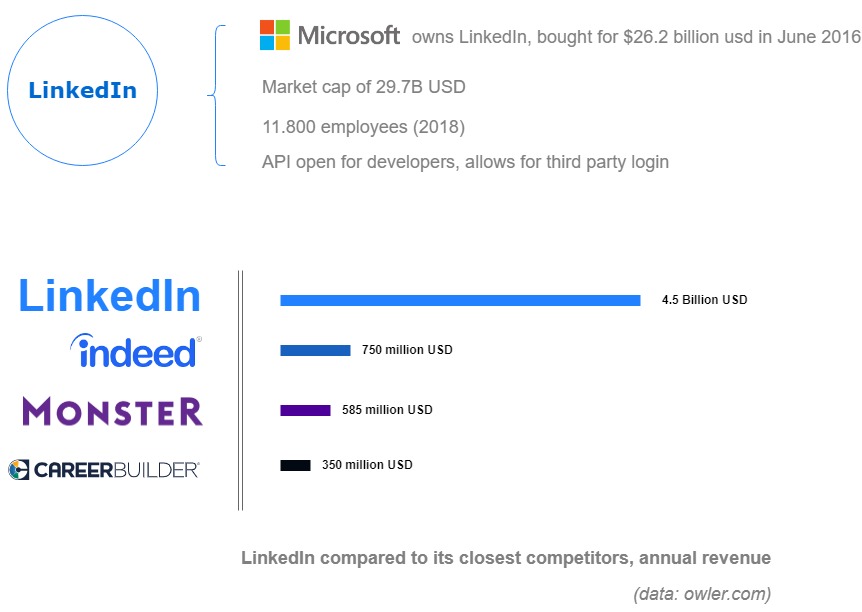 But to what extent is LinkedIn available for everyone? You could argue that every social group that has access to internet could theoretically make an account and start to network, however in practice we see that LinkedIn’s user base is primarily the higher educated (Zizi Papacharissi, 2009). Research has shown that the young and higher educated population is more likely to change position (Dana Unger &Gudela Grote 2018), possibly explaining why they are the primary users of LinkedIn.

But what is holding the others back from using the platform? It could be that LinkedIn serves more as a tool to those who are already familiar with networking and the jargon that comes along with it. I have to admit, I needed help from my mother who has been using the platform from the beginning, to make a profile that would stand out. I did not know what was supposed to be on there, and what the etiquette of LinkedIn was. Is it okay to send the speaker at an event a connection invitations? “Yes, but send a message as well complimenting the talk and why you’d want to connect”. Thanks mom. For those without LinkedIn-capable mothers, there is also “LinkedIn for Dummies”, but I can imagine this might be a moral obstacle for a lot of people. This skill is lacking for a lot of newly graduates, and it can be argued that online networking skills should be included in the curriculum (Benson, V., Morgan, S., & Filippaios, F. 2014).

How to set up a profile on LinkedIn, For Dummies, 2013

Furthermore, if somebody is already lacking a reliable network connection, that person might be missing out on opportunities that would improve the situation. Is this something that LinkedIn should take into account? Well, in my opinion not, as there is really not a lot they can do to improve the situation of those less fortunate. However, they could exercise their power to fight for internet rights as they have a large influence (e.g. join the fight for net neutrality).

Studies have shown that having an online CV influences the way people write it, differentiating in truth compared to old-school offline resumes. “Compared with traditional resumes, Linkedin resumes were less deceptive about the kinds of information that count most to employers, namely an
applicant’s prior work experience and responsibilities, but more deceptive about interests and hobbies.” (Guillory, J., & Hancock, J. T. 2012). The motivation behind this is that one’s history is often publicly available and verifiable, as interest and hobbies are not. With LinkedIn offering a place to publicly display your resume to the masses, the way they are written have changed considerably.

What is very concerning, is that there appears to be a connection between increased use of the platform and depression and anxiety (Jacquelynn R. Jones et al. 2016). We can only speculate about a reason for this connection, but it could be that using the platform constantly forces you to think about your career, and see how successful others are.

With data as an asset, risks quickly follow. LinkedIn has been subject to a data breach of massive scale, posing millions at risk. Early in June 2012, a major hack exposed 6.4 million hashed passwords online. Experts in the field of IT security confirmed that the passwords were indeed from LinkedIn, and furthermore that poor security measures had been taken by LinkedIn to defend themselves and protect their users. Old encryption techniques were used, and basic steps had not been taken. At the time of the hack, the company had a market cap of over 12 billion, and yet it failed to protect it users, which is rather embarrassing.

Will LinkedIn continue to dominate the market in the future? As of right now, the lack of serious competition indicates that this is not bound to happen anytime soon. With its current market domination and influence on how people network and find jobs, any new changes made to LinkedIn have the potential to have a large impact. LinkedIn has a monopoly on the digital career world, and has effectively changed the way jobs are found and people are recruited, in both positive and negative ways. Interested in further discussion or career talk? My linkedIn page is right below the article.

About Emiel De Smidt 3 Articles
Third year Computer Science and Engineering student at Delft University of Technology back home in the Netherlands. Currently studying at the University of Sydney for one semester.
LinkedIn

Reddit: it’s about time we talked about it A critical analysis of the political, economic, cultural and social impact of “the front page of the internet” Reddit was founded in 2005 by Steve Huffman and […]

Amazon.com is (operating under Amazon) is one of the leading E-commerce retailer and cloud computing provider. It is an online global marketplace that is available in 12 countries over 5 regions. This essay will uncover […]