This essay will critically analyse the transformative effect of LinkedIn in social, political, cultural and economic terms. I will first be explaining when LinkedIn was created and who founded it, as well as how the platform has grown over the years into the influential professional social networking platform that it is today.

LinkedIn, a professional networking platform was founded in late 2002 by Reid Hoffman and a team of his old colleagues that he recruited from PayPal and SocialNet. LinkedIn was launched on the 5th of May 2003, thus officially enabling people to engage and connect with one another on a professional level online. Networking (and LinkedIn in particular) was established so that people have the ability to advance professionally and technology (such as LinkedIn) allows so many individuals the chance to do that online (Gerard, 2012, p866).

boyd and Ellison (2007, p211) define a social networking site as any web-based service that “allow[s] individuals to (1) construct a public or semi-public profile within a bounded system, (2) articulate a list of other users with whom they share a connection, and (3) view and traverse heir list of connections and those made by others within the system”. This is something that LinkedIn directly facilitates by being one of the leading professional networking platforms on the internet.

Around the time of LinkedIn’s creation, social media was a successful haven for online dating and communicating, yet it hadn’t become a place where businesses could thrive.

The Development of LinkedIn

In 2002, Reid Hoffman gathered a team together to create LinkedIn.

In 2004, LinkedIn partner with American Express to promote their company to small businesses

In 2006, the company finally achieved profitability.

In 2008, LinkedIn expanded their languages on the site to French and Spanish and opened its first international office in London.

In 2009, Jeff Weiner was brought in as the CEO to improve LinkedIn’s vision, mission, values, and strategic priorities.

In 2010, LinkedIn boasted around 90 million members and had expanded to 10 global offices.

In 2011, they finally became a publically traded company on the New York Stock Exchange.

LinkedIn has had a transformative effect on our use and understanding of the internet because it allows people to connect and network professionally, something that up until 2003, had not been available online.

In the business world, networking is crucial to finding the right job, employee or business partner. LinkedIn aids people in getting high-quality referrals that recruiters can use to easy scout out potential employees for their company, thus making the recruitment process in many instances, a lot easier. 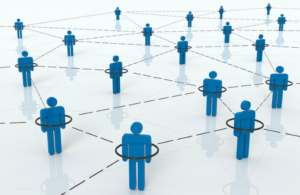 People networking, by Chris Potter, found on Flickr, CC by 2.0

LinkedIn’s business model stems from a multi-sided platform which essentially targets a large range of different customers. LinkedIn performs two key functions. Firstly, they offer hiring services to HR managers. Secondly, they offer a platform that allows professionals to connect and network with other people in their field, all in the name of employment.

LinkedIn’s differentiating factor is that users can’t initiate contact with any random. Instead, LinkedIn users are restricted to connections that they know personally or people who they are referred to through other professionals on the networking site.

LinkedIn is a professional social networking site, used by the world’s professionals in order to network and connect and has successfully transformed the way companies hire, market and sell. LinkedIn is one of the most transformative companies of our times as it has created a dependence on networks in order for us to make informed decisions.

LinkedIn has allowed companies to easily recruit employees as their CV’s and professional histories are easily available on the website. LinkedIn encourages its users to constantly update their profiles in order to have the best chance at being seen by recruiters. They also urge people to “complete their profiles with recommendations or statements from colleagues or clients praising their performance or competencies” (Suen & Chiang, 2015, p517). LinkedIn attracts the best talent, whilst targeting the best people suited for various jobs.

LinkedIn has been a transformative company as “The site employs a ‘gated-access approach’, meaning that connecting with others requires either a pre-existing relationship or the intervention of a mutual contact, which is a mechanism designed to facilitate trust among members” (Papacharissi, 2009, p204). This is in contrast with other social networking companies who allow users to connect with whomever they want, regardless of there being or not being mutual connections. 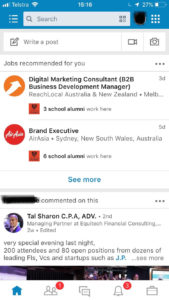 LinkedIn is a uniquely diverse business, as it generates revenue from many different streams. They generate revenue from advertising sales, premium membership subscriptions and recruitment.

LinkedIn’s vision is to create a platform that exposes everyone to economic opportunities in the global workforce. Aligned with their vision, the mission of LinkedIn is to connect the world’s professionals, allowing them to be more productive and successful in the workforce.

When LinkedIn launched in 2003, its main competitor was Friendster, a social gaming site based in Kuala Lumpur, Malaysia. Friendster allowed users to display some of their friends to signal certain aspects of their identity to potential friends/ audiences (Papacharissi, 2009, p202). Currently, LinkedIn’s biggest competitors are ZipRecruiter, Indeed, Career Builder and Glass Door.

An online survey conducted by LinkedIn in 2016 found that 79% of their members used the free basic account and only 21% used the premium membership. The premium membership starts from $29.99 a month, featuring subscription plans that offer uses Inmail messaging, ability to know who has viewed your profile and overall enables job hunting to be a smoother process.

Socially, LinkedIn has created a platform that allows people to connect professionally on social networking platform. LinkedIn has been transformative to the way in which recruiters find and hire new staff members and has allowed anyone with internet access to easily represent themselves and their work experience online.

Early studies of “cyberspace” and “virtual community” highlighted how social groups constructed the Internet as a virtual space for social interaction and individual expression (Rheingold, 1993; Turkle, 1995, as cited in Abbate, 2017, p10). LinkedIn is available to anyone that can access the internet. Although, in practice, it is only used by professionals who are wanting to represent themselves online in order to obtain better jobs and network with other people in their field.

LinkedIn essentially acts as a search engine for professionals as they can be searched for on LinkedIn via their job descriptions or skills, described by Halavais (2013) as a retrieval system that allows for keyword searches.

Socially, there is a downside to LinkedIn, as people with poor internet access may not be able to partake in the LinkedIn networking culture.

In terms of the political sphere LinkedIn hasn’t really had much influence over any politics that occur around the world. It also is not regulated by any particular government bodies due to the fact that it is a part of an invisible infrastructure that does not need government regulation.

Star and Ruhleder (1996, as cited in Abbate, 2017, p9) states that the fact that the internet runs on infrastructure that is essentially invisible, it “promotes ease of use and difficulty of social or political accountability”. LinkedIn is not monitored or regulated by any government bodies, therefore any incidents that occur on the site are directed straight to the company. 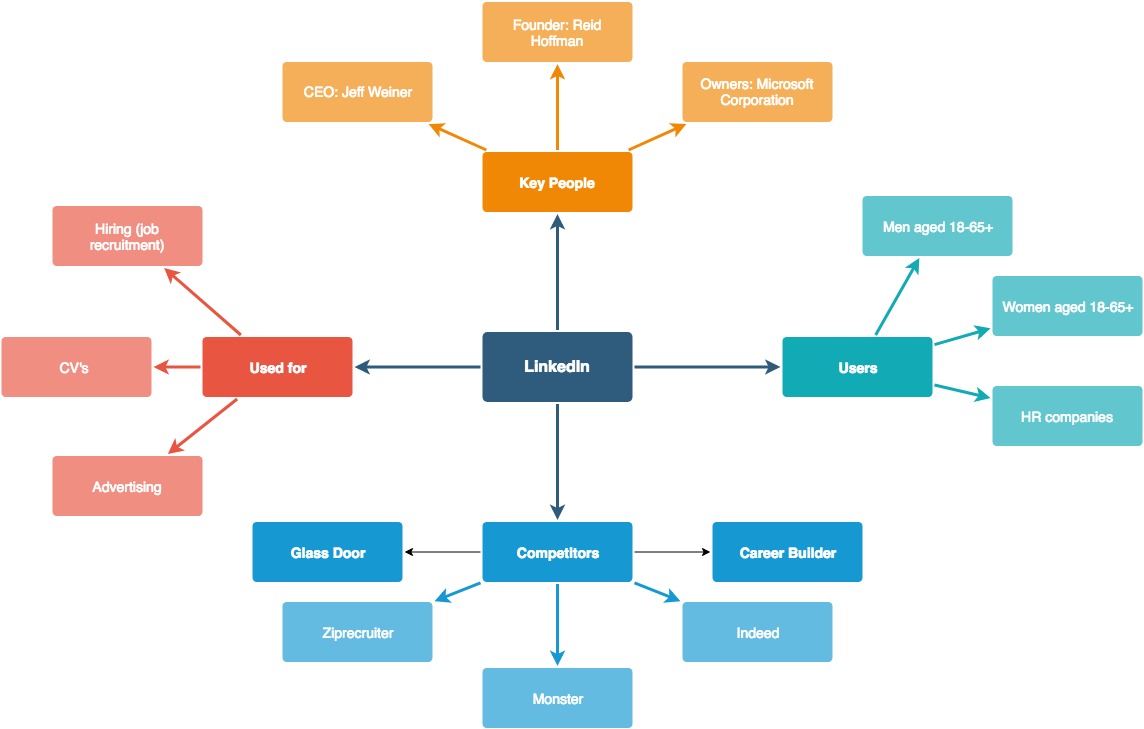 Culturally it could be argued that LinkedIn crosses the border between ones private and public life, as employers have constant access to your private details. As with any social networking platform, LinkedIn allows users to create profiles that are very often custom tailored to how the individual wants to portray themselves online. This could lead people being deceiving about their skills and abilities.

The content people choose to expose about themselves on LinkedIn is more career-oriented, as they want future employers to view them in only the best light. Guillory and Hancock (2012, p1) found that compared to traditional resumes, LinkedIn resumes were less deceptive about the kinds of information that appeals the most employers: prior work experience and responsibilities. Yet they found that resumes on LinkedIn were more deceptive about interests and hobbies.

Economically, LinkedIn provides jobs for tens of thousands of people worldwide, thus improving the economy in those areas, especially in the cities where they have their local offices.

Large companies such as LinkedIn deal with large quantities of data, thus exposing them to many possible risks. In 2012, a hacker stole 6.5 million encrypted passwords and posted them to a Russian crime forum, exposing millions of user’s LinkedIn accounts. Events like these put companies like LinkedIn in a vulnerable position as customers often feel violated and reluctant to continue using the site.

Castelyns and Caers (2011) found that 47% of people believed it to be appropriate to use LinkedIn in order to schedule professional appointments, thus economically this could have an impact for companies as the site is encouraging people to network and then in turn generate revenue from those meetings.

LinkedIn (2018). About Us, LinkedIn Newsroom, retrieved from https://news.linkedin.com/about-us

van Dijck, J. (2013). ‘You have one identity’: performing the self on Facebook and LinkedIn, Media Culture and Society,35(2), 199-215, University of Amsterdam, The Netherlands: Sage Publications.

LinkedIn is a social networking service that was founded in 2003. It aims to connect individuals with employers to allow prospective employees to share their professional history and career objectives whilst simultaneously allowing organisations to […]

Reddit: it’s about time we talked about it A critical analysis of the political, economic, cultural and social impact of “the front page of the internet” Reddit was founded in 2005 by Steve Huffman and […]