Search Engines and its Social Influence

Search engine can be viewed as the most significant product born in the internet age. For today’s youths and teenagers, in most cases search engine is the first tool they know to get information. The latest data shows that there are 4.2 billion internet users around the world. Virtually all of them get used to and depend on the instantaneous results responding to their various kinds of search questions. People are well aware of its convenience, however, it also generates many ethical concerns and social problems. This essay will track the origin and development of search engines, introduce the key businesses in current market and discuss the social influence it brings.

Search engines are computer systems which can store information, categorize information and show them to users (2012). It tries to give a serious of answers to the questions users ask or present information as closely related to the keywords as possible. Nowadays search engines are indispensable daily tools used by large numbers of people around the world. With search engines, those once difficult tasks like searching specific information or finding particular answers become easy. In the pre-internet period, people have to search through encyclopedias, libraries, or other information sources to find the information they need. With the results of the data presented by search engines, people can access to far higher quality and variety of information.

The concept of the search engine was invented in by Vannevar Bush, an American scientist at the end of WWII (2015). In his article published in a journal, he stated that it was necessary to develop a general index including all the knowledge. Since human being had already accumulated a huge amount of knowledge, individuals are not able to make use of them effectively. Records that store everything can be useful in science.

The first search engine is called Archie. Invented in 1990, It was designed to search FTP sites to create index to of downloadable files. Because of its limited space, it can only search listings rather than all the contents in sites. With this start, many other engines followed. In 1991, Virtual Library was set up which hosted lots of webservers. In 1992, Veronica was born. It could search file names stored in Gopher index systems. Jughead, created in 1993, could also search file names and titles in Gopher index, but could only search one server each time. These early search engines made preparations for the technologies utilized by those today’s well-known search engines. Each of them had some innovations and made progress in the development of search engine. For instance, JumpStation, as the first world large resource-discovery tool, started using crawling and indexing, and the other search engine followed it. As time goes by and related technologies became mature, search engines kept improving and creating competitive platforms for the various kinds of emerging technologies to arise.

Every living creature needs to be able to receive process and react information from the outside world. Human developed language and writing to communicate with others. Besides using organism, a human has also attempted to use technical means to deal with information since the beginning of the time. These technical means developed slowly in several centuries, but it got exponential growth in past decades.

In ancient period, people use an abacus and the counting tables as counting aids. The abacus is a frame constructed of beads strung on wires. It can do calculations including add, subtract, multiply and divide (Aimi, Antonio; Pasquale & Nicolino, 2005). In the seventeenth century, John Napier discovered the logarithm; then the slide rule was invented. The slide rule is an analog computer and can be used for more complex calculation, like exponents, roots, logarithms and so on (Roge, 2002). This tool was still being used until the emergence of the electronic calculator in the middle of the twentieth century.

Punch cards are the pieces of stiff paper that are used to store digital data. The data is represented by the presence and absence of holes in lines (Lubar, 1993). Digital data in this form can also be used to control automated machinery. In much of the twentieth century, punched cards were widely used in the data-processing industry. Digital computers used them as the primary medium for input. This technology was finally replaced by the magnetic memory technology.

The development of wireless transmission is also significant. People use radio, television radar in this area. In the 19th century, scientists proved thermos-electricity and proved the existence of electromagnetic waves, finding the law of electrical conductivity, magnetic effects and a series of knowledge of electricity. In 1901, human finally built first transatlantic radio connection. The integrated circuits, which emerged from this technology, are an essential part of every area of today’s information processing. Besides, this development line combined with the other news networks which are mentioned earlier.

Another essential invention in information-processing history is news transfer. People transfer news by the semaphore telegraph. Invented in France in the nineteenth century, it was the first telegraph network to carry information. The system encoded the information by mechanical element’s arrangement. With this system, a telephone and news network was developed. This network later became the prerequisite of the World Wide Web.

After reviewing the history of information management, it can be seen that human has always been dealing with data increasingly more efficiently. With the discoveries of scientific principles and their application, the human being can use more complex methods to store and use information. The invention of a search engine is a natural step for people to use information. 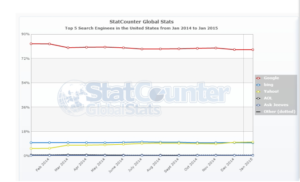 From the picture, it is clearly seen that Google has a steady 80% share, and about 20% of search engine usage is for all the other search engine. This current situation does not seem to be changing for a long time. Only in a short period, Firefox changed its default search engine from Google to Yahoo and Google market share wavered. However, those users gradually got back to Google.

Some other businesses in this field also are also used by a large part of the population. Bing, released in 2009, is a web search engine from Microsoft. Microsoft hoped to make some differences in the dynamics of the search-engine market and challenge Google. It is designed to display more retrieved information in search pages. Bing also presented related searches and the user’s previous searches on the left side of the page. However, despite its efforts and innovations, the users are not convinced that their search engine can produce better results than Google (Whitwam, 2013).

Yahoo Search firstly refers to an interface which was provided by Yahoo and can send queries. The presented result was under Yahoo’s band, but none of the actual web crawlings were done by Yahoo. In 2001, the searchable index was powered by Inktomi and later was powered by Google until 2004. In 2011, Yahoo search was powered by Bing. Yahoo is one of the most search engines and ranked fourth in the world nowadays (2015).

Google is definitely the main engine in most parts of the world. But in some countries, the percentage of Google users is much smaller and they use other search engines like Yandex and Baidu. Baidu is one of the leading search engines in China. Baidu gets information, products, and services through Chinese language, advanced searches, snapshots, spell checker, stock quotes, news, images, video, space information, weather, train and flight schedules and other local information (2017). 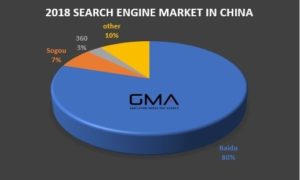 Yandex is the largest search engine in Russia. Its name means “yet another indexer.” With over seventy services, is now serving over 150 million searches per day (2017). Its primary audiences are in Russia and the Commonwealth of Independent States. Now it is the 5th largest search engine worldwide after Google, Baidu, Bing, and Yahoo!.

Search engine and its social influence

It is wildly accepted that people are the product of their environment. In the past two decades, the Internet, especially search engine, has developed to become a necessity in people’s daily lives, and they also direct people to information that affects almost every aspect of day-to-day lives. Life events, influences, and surroundings can change people’s thoughts and behavior to large extent. The sorting algorithms of search engines bring massive influence over the spread of information and another communication process. Most Internet users can become aware of the virtues of search engines. However, the use of them also generated many ethical discussions, like non-transparency, personal privacy, surveillance and so on. Among all these topics, the search engine manipulation effect is getting increasingly more concerns and generates substantial social influence.

Search engine optimization(SEO) is the marketing practice of building web pages that get more visitor referrals from search engines. In an ideal state, SEO practice can both bring websites more traffic and users better experience. However, sometimes SEO manipulations do nothing to improve visitors’ experience or even make it worse. The search engine manipulation effect is to change consumer’s preferences or even opinions from manipulations of search results by search engines. It is one of the most significant behavioral effects that ever discovered yet. SEO manipulation is used to engage in unfair competition or help online fraud in many cases. It can also have a more significant influence. A study (Epstein, Robertson, Lazer & Wilson, 2017) shows that, in democratic countries, SEME can influence voting preferences to large even 25 percent of national elections in different countries.

According to a research done by Northwestern University, researchers designed three experiments to replicate SEME and test its effects. In the experiment, the users’ voting preference changed from 0% to 39%. The research also found that alert users are influenced by SEME to fewer extents. These users’ browsing behaviors were also significantly changed by the alerts and tended to use more time to low-ranked search results. However, self-awareness can only suppress SEME but cannot eliminate it.

Nowadays, as many ethical problems generate by search engines are discussed and disputed, there are increasingly more people realize that search engines are not totally neutral. Even though it is one sort computer technology, it is value-laden because technological features in its design and Google’s dominant market share. Search engines can systematically exclude some sites and favors others. Such manipulations can bring social influence in many aspects. Although there are some measures to alleviate influence brought by search engines, people cannot totally eliminate them. In the foreseeable future, people still cannot live without search engines. How to deal with these influence is an important issue need further thinking.

Roger R. Flynn (2002), “The slide rule is an example of a mechanical analog computer”