Computers have significantly transformed our lives and work. Even so, computers have come with various health problems such as strain because of keyboard overuse, and as Mackay (1998) reports in her paper, strain injuries have led to more than 250,000 surgeries annually in the United States. The “paperless” office has also proven to be just a phrase as many office workers still have to deal with papers and the massive chunk of electronic information. The field of healthcare and medicine has enjoyed significant improvements in technology such as imaging and interactive diagnostic equipment. However, the majority of hospitals still rely on paperwork to do medical charts on a patient’s bed (Mackay, 1998). Augmented reality (AR) has come to address such problem.

By definition, Michael (2006) asserted that AR refers to “technology that allows the real-time fusion of computer-generated digital content with the real world” (p. vi).  In other words, AR allows one to have a real-time view of a physical environment made possible by including computer-generated digital information to that environment. AR is meant to augment or redefine how a person would interrelate with and interpret the real world by having virtual information on their direct surroundings. According to Mekni & Lemieux (2014), Augmented reality: Applications, challenges and future trends journal, AR is a system with the following features: 1) Interactive in real-time; 2) Combines real and virtual, and 3) registered in 3-D. These characteristics are echoed by Furht & Carmigniani (2011) in their paper Augmented Reality Overview

AR is in complete contrast with virtual reality (VR). In the case of the latter, a user is completely immersed in a synthetic environment whereby they are incapable of seeing the real world directly (Michael, 2006)). Both AR and VR are features of a wider reality-virtuality field called mixed reality (MR). Theorem Solutions have provided detailed explanations and differences among the three facts. However, according to Michael (2006), mixed reality is whereby “the real world and the virtual world objects are presented together within a single display anywhere between the extrema of virtuality continuum” (p. vii).

The image below simplifies the differences between the three realities. 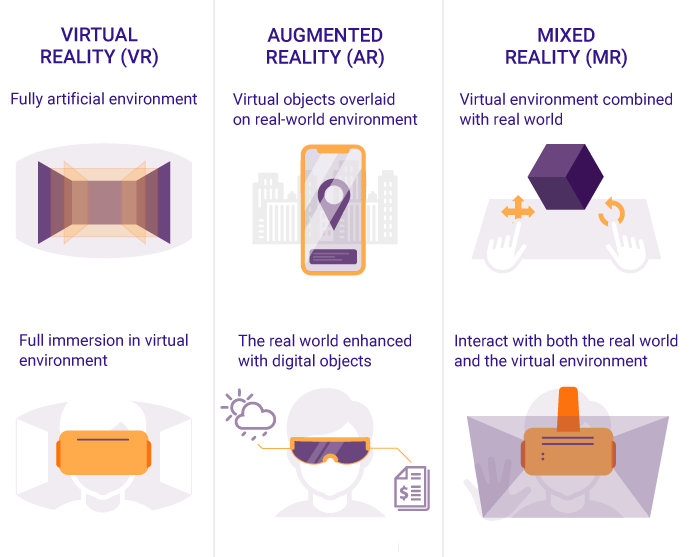 The Five Types of Augmented Reality include projection based AR, recognition based AR, location based AR, outlining based AR, and superimposition based AR (iGreet). All these types of AR are applied in different fields including healthcare, education, gaming, entertainment, advertisement, and navigation among others. Some of these fields are discussed below.

One of the greatest beneficiaries of AR is healthcare. AR has significantly advanced in recent years, and many patients have benefitted from it. Throughout the world, AR is being carried out in many hospitals. The two exceptional areas that AR has been applied in healthcare are in surgical operations and training. AR is employed in surgical procedures that require the practitioner to explore the patient’s body. During training, AR is used to display different body parts or organs in 3-D so that it is easier to identify them.

Laparoscopic surgery is a technique where the surgeon only makes a small opening to perform the procedure. According to Fuchs et al. (1998), laparoscopic surgery is a massive intervention and visualization technique. However, it has various disadvantages including images being displayed in 2-D, inability to view a wider area, and the procedure involves extensive hand-eye coordination (Fuchs et al., 1998). AR has come in to solve these challenges and make the process more efficient. AR enables the practitioner to view the patient’s body in 3-D. It also allows them to superimpose inside the patient’s body so that they know the exact location to open up. In standard laparoscopic procedures, the surgeon only views the patient through the camera. However, with AR, the surgeon sees the body in 3-D using information from a previous surgery which allows them to concentrate on the procedure without having to keep looking at the monitor. A Head Mounted Display (HMD) system has to be used when AR is applied in surgical procedures.

AR has become significantly accepted in medical training. Doctors in anatomy and surgery fields are using AR to learn by operating on virtual patients. This act is crucial as it removes the risk of harming a real patient during training. According to Sielhorst, Obst, Burgkart, Riener, & Navab (2004), an AR simulator has been created to reduce the number of cesarean sections through training doctors with the simulator. Through AR, the anatomy of the human body is displayed in 3-D. Students can see the anatomy superimposed on their bodies. This 3-D display of the bones, brain, and organs makes it easy for the students to learn and retain the images on their heads. The future of AR in medicine is massive. It is a brilliant way to train students from primary schools so that they can understand better what they are learning. Difficult surgeries will be made easier as surgeons will be guided by the overlays that are superimposed.

Perhaps, the most popular use of AR in the classroom is the usage of AR applications directly. These applications make it easier for the teacher to explain a topic, offer a visual demonstration, and enable students to test their knowledge in practice (Aleksandrova, 2018). The education sector is increasingly becoming digitalized, and the conventional methods of teaching are becoming extinct. Technology innovations are enhancing this change. According to Aleksandrova (2018), by 2020, the education technology industry (EdTech) is forecasted to reach $252 billion. The growth rate is projected to be 17 percent per annum (Aleksandrova, 2018).

AR in education serves many functions. It enables the students to acquire, practice, and retain information. It also makes learning more fun and engaging. One can find AR Apps on almost all subjects taught in school. Distance learning has also become more comfortable and efficient through AR-aided materials that students use to study outside the classroom. Education has become a source of entertainment with the advent of AR and students are finding more fun learning in this era as opposed to the past decades where there was no AR technology.

One of the popular areas that almost everyone is applying AR every day is navigation. Gone are the days where one would stop to ask for directions or walk with a physical map to get the directions to their destinations. Anyone with a Smartphone can navigate to wherever they want to go using their phones even where they are in foreign places. According to newgen apps website (2017), smartphone’s AR applications usually have a Global Positioning System (GPS) to mark the location of the user and a compass to detect the orientation of the device.

The AR GPS walk or drive navigation uses the phone’s GPS and camera to execute the navigation system of the car using an AR-powered technology. It is safer and more natural than the usual driver’s navigation system (newgen app, 2017). The app guides the user by the virtual path provided by the camera video which makes them understand easily. The user can view the real-time camera navigation screen to get the driving directions and road conditions. The technology is now allowing users to share their live locations and navigations with their friends.

Twitter has seen massive reactions from users who appreciate what AR has done to navigation and other areas of life. According to Sinofsky (2018), the Google Maps walking navigation using AR is a “killer app,” and its creators deserves to be congratulated. He expressed these sentiments through his Twitter account handle that conveyed the message on May 8th, 2018. Another Twitter user, GEME.io, asserted that “AR collaborating with GPS, location sensors and geospatial data techniques will transform the way we connect and move through our real, physical space” through his tweet on his handle.

In conclusion, AR continues to transform our work and lives through innovative technologies. It has become an increasingly significant aspect of how we live and has influenced various areas including healthcare, education, and navigation among many others. AR in surgery has made procedures more efficient, easier, and quicker; it has made learning more engaging and fun and has made navigation easier. All these technologies and developments can only be improved upon, and in the coming years, AR will have taken shape in almost all aspects of our lives. Modern technology increasing advancement will see the world changing from the conventional operating models to innovation-based AR models. Commercial businesses, manufacturers, retailers, and marketers are all enjoying the benefits that come with AR technologies as they can present to their customers and prospective customers a feel of their products in 3-D. AR is increasingly becoming a tool for competitive advantage in businesses and other life areas.

Aleksandrova, M. (2018, April 24). Augmented Reality in Education: The Hottest EdTech Trend 2018 and How to Apply It to Your Business. Retrieved October 12, 2018, from https://easternpeak.com/blog/augmented-reality-in-education-the-hottest-edtech-trend-2018-and-how-to-apply-it-to-your-business/

Mackay, W. E. (1998, May). Augmented reality: linking real and virtual worlds: a new paradigm for interacting with computers. In Proceedings of the working conference on Advanced visual interfaces (pp. 13-21). ACM.

About Jianhong Chen 1 Article
Currently studying at The University of Sydney.