The notification center of mobile phone is full of entertainment, finance, sports and political news from various apps. When you open the social media platform, you will see what current news people are discussing and searching for, which meme popular is and which hashtags most used. 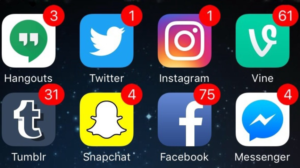 From 1957 to now, the network has gone through changes, among which, news communication and sharing methods have changed from traditional modes, such as TV, radio and newspaper, and even word of mouth to online social news, such as Facebook, Twitter, Reddit, WeChat and so on, which are totally dependent on social media. In growing numbers of people are turning to “social news” to get news fixes, distinguishing it from more traditional news sources (Lifewire,2018).

This paper will study modern social news sharing according to the brief history research, historical trends and changes of network technology. Analyze the impact of social media platforms which are places for media news content distribution on people from the aspects of social culture, political economy and public policy.

The evolution of social media

A video provides viewers an overview of the history of the networked and social media. We can learn that people start spread information while the network came along. Release published information is the beginning of the news sharing. With the popularization and development of mobile devices, people rely on mobile phone or tablet computer, online social news speed up the information transmission speed, no longer pigeon mail, circulated newspapers. An era of rapid information development has been formed. It is also worth mentioning that, unlike traditional media, there is no problem of “people passively receive news contents delivered in the media channels” (Lee & Ma, 2012). Users can choose or follow the topics they are interested in or search for the news of the day. Therefore, the development of online social news should be part of the historical trend of media. This trend is reshaping the way we engage with news, the way journalism is produced and disseminated, and the news media itself (Dwyer et al.,2017).It witnessed the expansion of information communication mode and provided everyone with the right to speak freely.

The world will soon know a popular topic. And it can be edited and posted in a short time by            participating in discussions on social media in their regions. It also demonstrates the increased engagement of users who can comment and retweet this news feed. Social news becomes a more personalized form of information

Social media site is a major venue to get social news (Nielsen & Schrøder, 2014). More and more Facebook users are sharing news with their friends through the site’s standard interface ( Oeldorf-Hirsch, Sundar, 2015). As the significant sources of traffic for online news sites (Napoli, 2015). It leads the key business in social news sharing field. Social news platforms serve as hubs for news stories from a variety of other third-party sources, including friends, your favorite brands, media organizations, popular story blogs, advertisers etc. (Lifewire, 2018). News media organizations and offline newspapers agencies set up accounts on major social media sites in an effort to distribute their content and news through social media (Ju, Jeong , S & Chyi, 2014). At the same time, increasing quantities of social media users are willing to share links to news stories by clicking a button (Purcell et al.，2010). Their friends could receive more and more news websites by shared from others. This is the widespread nature of news sharing. 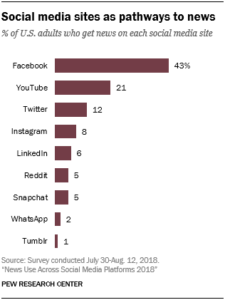 Taking Sina Weibo (as known as the Chinese Twitter) for example, which is a high‐penetration social media site in China and the main venus for Chinese young people to get caught up with the news and current trends. Like the “trending section” of Twitter, Facebook has a page for updating trending news stories, keywords, and hashtags in real-time. People can use and forward these tags, as well as related posts. Weibo combined with excellent users and a good interactive to become one of the most important information sources in Chinese people daily life. Hashtag is one of the most massive tools that can be found by users in social news sites (opensesame, 2012). 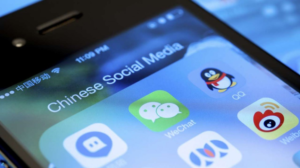 Image is retrieved from: https://www.scmp.com/news/china/policies-politics/article/2055179/how-chinas-highly-censored-wechat-and-weibo-fight-fake

The use of hashtags communicates the latest hot spots directly to the audience in simplest way. Tags are shorter than an article title and attract attention by subject-predicate phrase. A microblog with hashtags is more focused on the specific topic rather than a microblog that just mentions that phrase (takeflyte, 2014). At the same time, hashtags become Personalized links to search queries (takeflyte, 2014). Some social media sites outrank even search engines as means of directing readership (Fortune ,2015).

Let me guess: you’re reading this post because you just did a search on “social news sharing” or “how to news sharing in social media.” Hashtags

Who are benefited from social news sharing?

There are threegroups of people who can benefited from social news sharing. 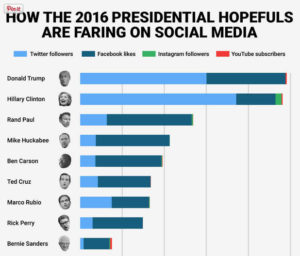 As a typee of merging media, social media sites are popular with young people. Some politicians or political news can be attracted with young generation on the platform. Meanwhile, because each post is not long, it can let more young people know about national politics or international political news in a short time and arouse their interest in politics. For example, in the US presidential election, people without the right to vote can conduct simulated voting intention on the Internet and participate in discussions with others. News about the election will also be presented on the social media homepage.

Figure5,  How the 2016 presidential hopefuls are faring on social media

Image is retrieved from: https://techofcomm.wordpress.com/tag/2016-u-s-presidential-election/ 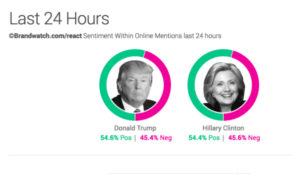 Figure6, the data comparison of Trumps and Clinton’s supporters on social media sites

Image is retrieved from: https://www.firstpost.com/world/us-election-2016-an-unstable-social-media-is-figuring-out-its-preferences-for-donald-trump-and-hillary-clinton-3096444.html

I also found that the United Nations, the diplomatic service, the customs service, or some UGO have also created official accounts, and the official departments that you have known on TV have appeared in your browsing interface. Sometimes, they do not make formal comments on their posts, it draws citizens closer to the those political establishments.

Competition between the number of users of each newspapers publisher or social media platforms has commoditized social media sharing (Dwyer et al.,2017).Because the economic wealth of these platforms are the values of data which through the clicks from the accessing of media users (Carlson, 2018). Publishers spend a lot of time editing the marketing to obtain the economic values, treating potential consumers’ attention as a resource, then push each user’s personal favorite content, inspire them to share the news posts (Couldry, 2018). To get the economic benefit of more readers (Hong, 2014). Every newspaper will also try to get exclusive news to draw attention to itself.

Online celebrity effect has a great social influence on social news sharing. Well know people or microcelebrity use their influence to make more people pay attention to a certain news event. For example, the previous hot ice bucket challenge, through the participation and publicity of various stars, more than 28 million people participated in the discussion of the ice bucket challenge on Facebook, including posts, comments and likes of posts. At the same time, netizens can make contact with like-minded people when commenting or participating in a certain news.

News is spread through official accounts or private accounts on social media websites, and the sources of information are diverse, resulting in the fact of information cannot be guaranteed, and there will be fake news on the Internet. According to the Southern Metropolis Daily report (2017). Chinese social media platform WeChat security provided a set of data on fake news. The platform security apartment received more than 30,000 false news reports from users a day, and an average of 2.1 million fake rumour posts were blocked by the system. Moreover, illegal information is also exist, therefore each platform needs strict supervision in order to maintain the network environment.

In conclusion, journalism has undergone many changes in the past few years, the future of news is social. In a society with rapid information development, social media as an important leader accelerates the dissemination of social news information. The development of online social news has become a part of the historical trend of the media communication. Individual is given the opportunity to post a message. But the spread of unconfirmed news or news that was later found to be false (Li&Sakamoto, 2014) also needs to be valued and regulated. Social news not only benefits individuals, organizations and publishers also have benefited from social news sharing transformative effects in political economic, social and cultural terms.

Napoli, P. M. (2015). Social media and the public interest: Governance of news platforms in the realm of individual and algorithmic gatekeepers. Telecommunications Policy, 39(9), 751-760.

The King of Chinese Social Media: Sina Weibo (2012, May). Opensesame. Retrieved from https://www.opensesame.com/blog/king-chinese-social-media-sina-weibo

ARIN 2610 Net transformation Hypertextual Essay Question 1 internet innovation: Search Engines   DAI YIXIN (Yui) 09/10/2018   With the rapid development of the technologies, there are more and more internet innovations were created by […]

The topic of Network Neutrality has been subject to much debate in recent years; however, the discourse surrounding the topic has been so far extremely America-centric, with little discussion of its potential application in the […]