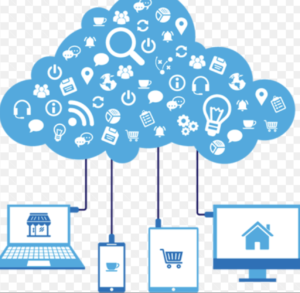 Cloud computing has become of the most discussed new technological innovations in the decade. This technology is changing the world on many levels and changing our lives in many ways. Cloud computing is an Internet-based computing method, which uses a network of remote servers hosted on the Internet to store, manage, and process data, rather than using a local server or personal computer (Armbrust et al., 2010). While cloud computing may seem novel to many businesses and individuals, its development has taken place for more than a few decades. Cloud computing originated in parallel computing, distributed computing, and grid computing (Nwobodo, 2015). It is also a result of the combined evolution of virtualization, utility computing, SaaS, SOA, and other technologies (Marston, Li, Bandyopadhyay, Ghalsasi & Zhang, 2009). With cloud computing, shared hardware and software resources, as well as information, can be provided to computer terminals and various other devices on demand. It has the potential to disrupt the software industry, as it allows applications and licenses to be readily available for use, by allowing applications to run on the network rather than on devices.

Cloud computing impacts the operations of businesses as well as the daily lives of ordinary consumers. Cloud computing connects computer and other smart devices to large data centers, enabling people to break through constraints in resource and get information on a nearly unlimited platform.

The Genesis of Cloud Computing 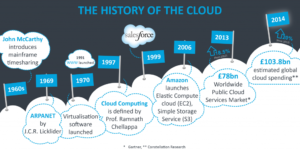 image from times of cloud

The concept of cloud computing first emerged in the 1950s. During this period, businesses were beginning to use increasingly complex mainframe computers to process their data. Due to the high cost in buying and maintaining large mainframe computer, it was not practical the organization to purchase one for every employee, nor did individual employees need the storage capacity and processing power of the mainframe computer at the time. Thus, the solution most organization adopted was to purchase one or two mainframe computers and allow multiple users to access it through dumb terminals according to schedule. This gives rise to the “time-theory” brought forth by John McCarthy in 1955 (Weil, 2018). In the 1960s, both theory and technology took a giant step forward, and the ARPANET (Advanced Research Projects Agency Network) was developed. While the previous time-sharing theory focused on the sharing of computing power, the ARPANET allowed the sharing of digital sources among computers that are not in the same location. In the 1970s, the concept of virtual machines was created. The operating system called the Virtual Machine (VM) released by IBM allowed one or more operating systems to be simultaneously executed in an isolated environment (Buyya, Yeo, Venugopal, Broberg & Brandic, 2009). This means that the multiple distinct operating systems can now reside in one physical hardware.

Entering the 1990s, telecommunication companies that can previously only offer single dedicated point-to-point data connection can now offer virtualized private network connections. Users were provided with shared access through the same physical structure. This maintains service quality and reduced cost at the same time. Based on these developments, in 1999, Saleforce.com was established as a pioneer in cloud computing with its main product being the CRM (Customer Relationship Management System) (Sasikala, 2011). In the first decade of the 21st century, Amazon began to act to free resources from a single specific business and provide it to other users when they were idle to increase capacity utilization. Amazon named this service AWS (Amazon Web Service) (Sasikala, 2011). In the following year, Amazon released the famous EC2 (Elastic Compute Cloud), a milestone product, IaaS (Infrastructure as a Service), a cloud service product that provides infrastructure for the public (Sasikala, 2011). Following Amazon, giants such as Microsoft and Google rushed into this field.

The Benefits of Cloud Computing

Cloud computing offers substantial benefits to businesses. The technology allows businesses to set up a virtual office that allows connection from any place at any time. The primary and most prominent benefit to adopting cloud computing is reduced costs of managing and maintaining IT systems. Businesses with cloud computing no longer have to purchase expensive equipment and systems (Watson, 2018). Instead, they will be using the resources of cloud computing service providers. In addition to reducing costs, cloud computing also increases efficiency. Companies no longer need to hire a technical support team to solve the server problem, which further reduces costs (Watson, 2018). In addition, cloud computing is scalable. To expand server time with server-on-premise requires expensive hardware upgrades, and these upgrades require plenty of upfront costs. If the business does not scale as expected, upgrading hardware would be a waste of money. Cloud computing service providers typically enable businesses to scale and shrink their use of cloud computing resources seamlessly. When companies purchase computing resources based on demand, waste of resource can be eliminated.

The flexible and relatively low cost of cloud computing especially benefits startup and developing companies with limited resources. The common challenge for startups is that the companies have inadequate financial resources. They often do not have the money to develop their company to a stage where their business model works. Server costs are a considerable investment for startups, which exacerbates their problems. Cloud computing requires fewer startup costs and need not the deployment of a regular local server. Companies can pay for their resources on a monthly basis according to their need.

As cloud computing reduces costs for companies, it subsequently lowers the price for consumers. With companies adopting cloud computing, consumers can enjoy more efficient services offered at a lower rate. Cloud computing is also more secure than locally deployed servers. In the event of a natural disaster or a complete computer crash, companies adopting cloud computing do not have to worry about losing critical data and business applications. This also ensures the safety of consumer information. Cloud computing also benefits society as a whole by reducing carbon footprints for businesses. Adoption of cloud computing means fewer physical servers for companies. This allows companies to scale down or completely abandon the data center. The fewer servers mean fewer resources are used. Besides, the ability to share files can reduce the number of team printouts and reduce costs while saving electricity.

The use of mobile maps based on cloud computing is also a significant change in our life. In the past, it is necessary to have a local map when going to unfamiliar places. It is the GPS based on cloud computing technology that brings us all of this. Now, all that is needed is a mobile phone from which we can access a map of the world. The mobile map also offers a great deal of other relevant information, such as traffic, weather, and more. Such complex information does not need to be pre-installed in our mobile phone but is stored in the “cloud” of the service provider, allowing us to find what we want by pressing a button quickly.

Another change that cloud computing brought to daily life is that of music streaming. Music is an indispensable part of people’s life. With the growing need for more storage, the public has purchased one device after another for their larger capacity. However, regardless of what device it was, storage problems have always existed, and it was troubled by the lack of capacity to hear the music people want to hear. The emergence of cloud computing music solved this problem. People can finally enjoy any music they want without having to download music files again, as the music files are now stored on the cloud.

Weakness at the moment 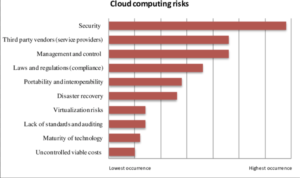 The current data security of cloud computing is still the focus of discussion: Who controls the key；data transmission, storage integrity, personally identifiable information, financial information, privacy disclosure(Popović&Hocenski, 2010). How to ensure that the user’s data is not exploited illegally, reduce data loss, reduce security risk is now the problem of cloud computing needs to face.

Cloud computing is considered by many as the next revolution in the tech world, for that it can bring about fundamental changes in the way of work and life. By creating connections most conveniently and productively, cloud computing can strengthen social interaction and professional communication. It can spawn smarter devices that are fit perfectly to where people are and what they are doing. Cloud computing can also drive advance in server technology, which will in turn lead to improvements in cloud computing itself. This transformative introduction of Internet innovation cloud computing has benefited businesses and various other organizations in reducing costs and increasing efficiency. Individuals in turn enjoy the benefits of better services at a lower price. The society and environment benefit from the saved resources. Cloud computing creates opportunities for anyone with ideas the chance to connect with users around the world anytime and anywhere while being protected for personal privacy. Through understanding the direction of individual efforts, cloud computing helps people learn, make decisions, and take action by providing them with information and applications that are consistent with their wishes.

Watson, G. (2018). The Balancing Act Between Cloud and On-Premises IT. Retrieved from http://www.datacenterjournal.com/balancing-act-cloud-premises/