Biometric technology has been increasingly used for personal identification, in both the public and private sector, as a rapid way of verifying identity and controlling access to a variety of services. However biometric identification also brings up serious concerns over privacy rights and discriminatory profiling.

The aim of this essay is to provide a historical and comparative analysis of this burgeoning technology and its implications within the socio-political and economic context. This essay will then analyze the arguments for and against the implementation of this regulatory system in Australia.

What is biometric identification? 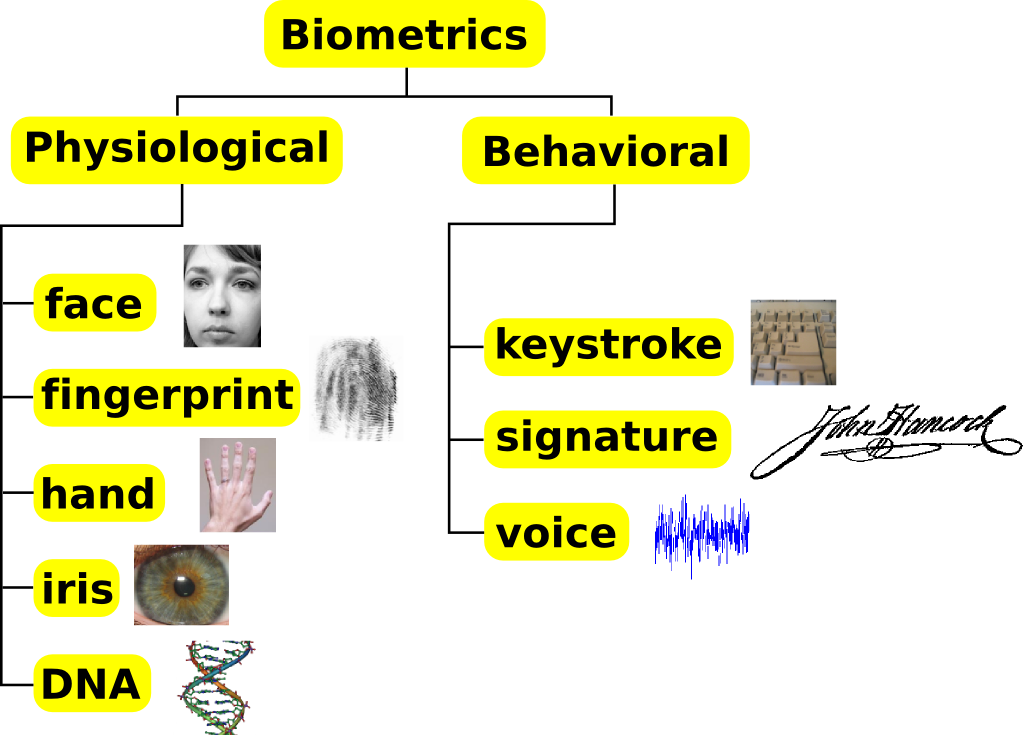 Biometric practices date back thousands of years. Cummins (1942) describes fingerprints found in ancient clay objects from the Babylonian era; in Ancient Egypt, physical characteristics were used to describe merchants (Nadeau, 2012). In the nineteenth century, biometric systems of identification, namely the Bertillon system, were widely adopted in Europe and the United States for criminal identification.
In the computerized age, biometric authentication techniques gained widespread use and grew increasingly sophisticated (Nadeau, 2012). Nowadays biometric technology has permeated various aspects of everyday life and serves a variety of purposes, from tracking national security threats to accessing a bank account. According to a report by the Council of Europe, globalisation, the development of information technology and global security issues are also contributing factors to the increasing use of biometrics.

How does it work?

A biometric system is composed of a sensor that detects the human trait, a computer to read and store the information, and a software that analyzes this characteristic.

Biometric devices (1) register individual traits (through the process of “enrollment”), (2) analyze and store the coded information and (3) compare each captured image to the database in order to determine if the image matches the stored templates (see Figure  2). 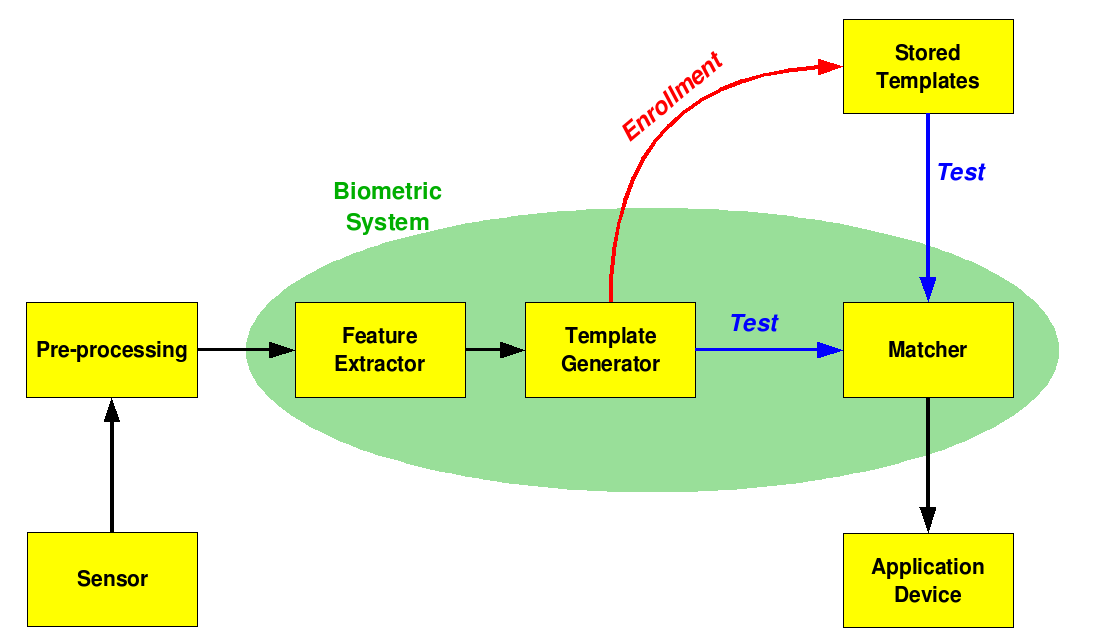 Van Hamme et al. (2018) identify three interacting dimensions to characterize authentication systems: usability, security and privacy. The balance of these three elements is necessary in order to achieve a frictionless experience towards the users.

In 2009, the government of India launched Aadhaar, a national identification program based on biometric information. The system became the largest biometric database in the world, containing the fingerprints, iris scans and photographs of more than a billion people. As of mid-February 2018, 89% of India’s population has been registered in the Adhaar system. 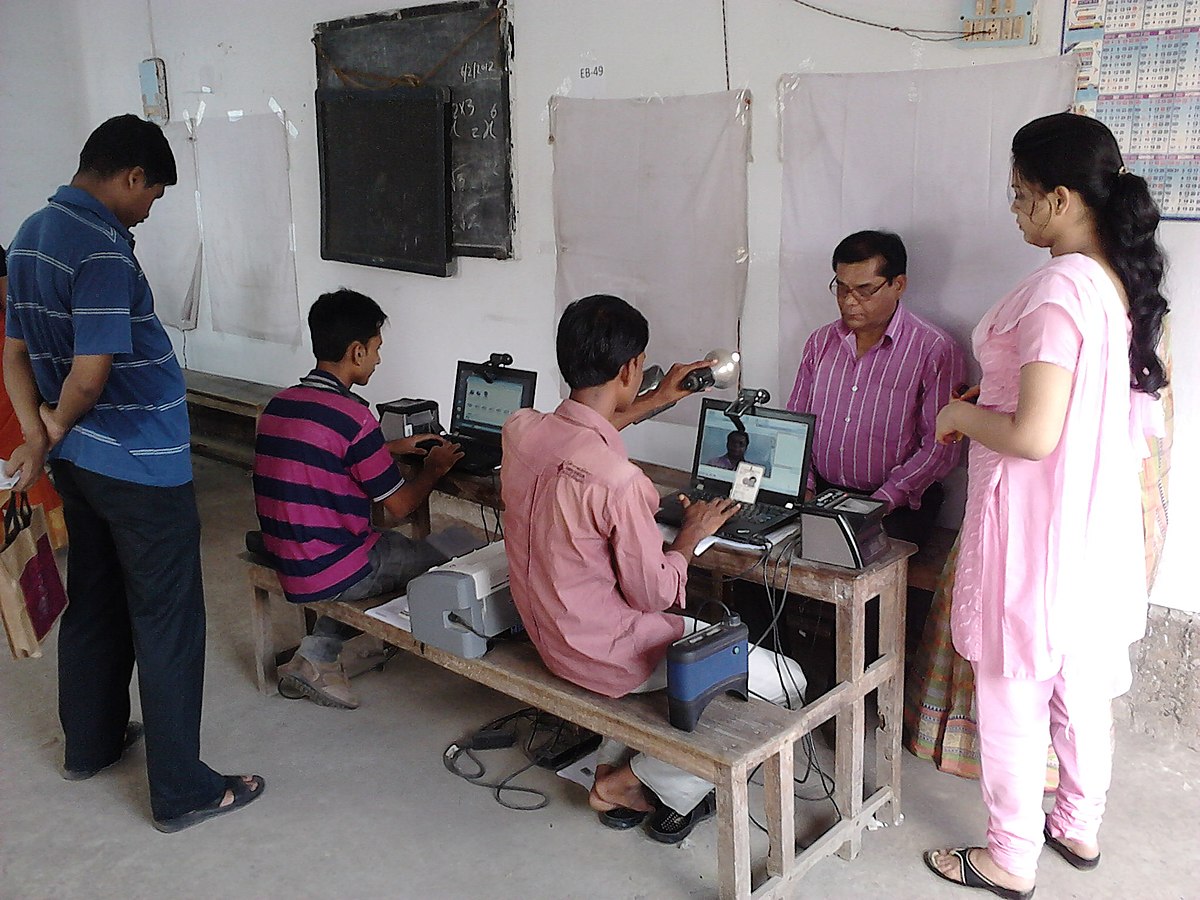 Aadhar is described by a government website as a unique program which provides “state-of-the-art digital and online Id” at a large scale. Registration is free of charge and the system is notably used for welfare schemes and service delivery. The use of biometric data can be considered an innovative way of promoting the social and financial inclusion of marginalized groups, especially women or people living in impoverished rural areas.

However Aadhar requires an Internet connection and electricity, which poses a serious problem for the people living in remote and marginalised areas with weak signal, who rely on this technology for necessities. The system has also been criticized for violating privacy rights and instituting “mass surveillance”, although this view has been repealed by the Supreme Court, which upheld the validity of the system in accordance with constitutional rights.  Reports of misuse and security breaches reinforce the arguments against the collection of biodata for governmental use.

A new model for state surveillance?

Biometric technology has also been employed by Chinese authorities to collect data on citizens and strengthen their ever-tighter control over the population, as was revealed in a BBC report.

Surveillance technology has been used to roll out a ”social credit” system to monitor both social and financial behaviour (see excerpt from the Foreign Correspondent below).  Facial recognition is used for routine law enforcement such as identifying jaywalkers. In addition, a report by the Human Rights Watch  revealed that the government collected biodata to identify minority groups and political dissidents from the Uyghur region, under the guise of a healthcare program. These invasive mass surveillance techniques have been strongly criticized by human rights activists for violating privacy rights.

Biometric identification is a growing trend and has gained widespread use around the world. It is estimated that 50% of the Australian population has some kind of biometric data registered in the national database. In 2008, the Australian Law Reform Commission issued a report stating that biometric systems are being increasingly introduced by the Australian government and organisations. Yet biometric technology raises a number of concerns, for instance over the security breaches, privacy rights and the protection of personal data.

The ACIC recently suspended a biometric program designed to create a criminal database using facial recognition due to delays and over-budgeting. The program would have added to the national fingerprint database as part of law enforcement measures which involve an increasing reliance on biometrics. The question therefore remains: should the Australian government systematically rely on biometrics for personal identification?

Biometric identification offers relatively secure and fast authentication. Biometric technology is effective as it allows for the identity of an individual to be authenticated within seconds with a “fair degree of certainty” (ALRC, 2008). If properly encrypted, multimodal biometric technology has the potential to reduce security issues and present itself as a solution to identification problems (Normalini and Ramayah, 2012).

These systems allows for a number of online governmental services to be readily accessed by individuals registered in the national database and could therefore contribute to a greater inclusion of groups in the social and financial schemes by facilitating their access to these services.

Biometric technology is a powerful tool for the state. It is seen as a cost-effective way of identifying individuals for the purposes of criminal law enforcement and managing security threats, such as terrorism. The technology is also used to effectively to track immigration and border control, and to prevent identity fraud (ALRC, 2008). Biometric systems provide valuable demographic and biometric information about individuals which can be readily accessed and more accurately recorded. The World Bank has estimated that the Indian government was able to save close  to $1 billion per year by using Aadhaar.

Privacy is a major source of concern in regards to the use of biometric identification for extensive monitoring of individuals (OECD, 2004). The collection of biometric data combined with other personal information could be used to create a complete profile of a person. This sensitive information could then be used for profiling and influencing political behaviour. Freedom of choice is also put into question should the system become mandatory for every citizen. With the proliferation of this type of verification there would be increasing pressure to participate in the program in order to access certain services, making it more of a “requirement” rathen a voluntary act.

Biometric recognition is prone to several vulnerabilities and one of the biggest risks of biometric technology is that of security breaches. As Gupta et al. (2016) demonstrate, iris recognition systems may suffer from various attacks. Multimodal biometric systems are also vulnerable to spoof attacks (Akhtar and Kale, 2011). The question of security therefore raises legitimate concerns with empirical cases such as the hacking of biometric passports in the United Kingdom. Furthermore, it is nearly impossible to modify one’s biodata once it has been stolen and the damage could be irreversible.

The reliability and accuracy of these systems can be put into question. In India, there were incidents where citizens being denied access to services due to errors or false identification. In addition, health issues or aging may interfere with the reliability and efficiency of authentication. The accuracy of biometric recognition may encounter problems due to biomedical changes which may alter certain features. A false positive or negative can imply serious security breaches or exclusion from a particular service.

Another issue is that of accessibility. In places with unreliable internet connection, people will struggle to get online authentication. The system may further instigate dynamics of exclusion set targets for discriminatory profiling.

Any kind of technological project is embedded within the socio-political and economic context. Digitization provides new mediums for online personal identification. At the same time here is a growing concern for protecting sensitive personal information. Although biometrics may appear as reliable forms of identification, there are several drawbacks to these systems. Regulation and effective measures to protect privacy rights would need to be implemented alongside the advent of automated authentication methods and digital databases.