Cloud computing is a concept that has been adopted into the world with ease. There is a high need for data storage space due to the excess production of data every day. This has resulted in the need for more storage space and the best idea that has been established to solve the problem is cloud computing. Cloud computing deals with the storage of data in a remote server called a cloud and the data can be accessed and managed from the cloud using good internet connections (Nurm et al., 2009).

The technology can be tracked back to the 1960s and has kept developing through these years. It has come through various stages and become the way of storing data in the firms. The technology was however not utilised until the late 2002 when amazon launched their first cloud computing service which was called the amazon web service. Since then, many organisations have come into place and become major players to develop various cloud computing technologies including the infrastructure as a service, platform and software as a service as well, all of these had a great impact on the current technologies in the fields of information management.

With time the idea of cloud computing has evolved changing the way data is stored and the types of service that can be offered in a cloud. The major entrance by organisations such as Microsoft and Google have made a great impact on information management. Now people can even do more than just store data in the cloud computers. They can develop applications and host them in the cloud services while other provide resources and the users can manage the resources.  Most of the devices will be connected to the cloud and they will store process and retrieve data from the cloud during their operations.

The most common architecture model that is being used by most of the cloud service providers is that they offer cloud services as a service. The major reason is that the cloud service does not use the user-end machines but rather use the hardware in the data centres which act as the cloud computers (Dikaiakos et al., 2013). The cloud computers can only access the hardware which is on the data centre easily rather than the computer that is being used by the client. This is why most of the organisations have decided to use the service platforms to serve their customers.

When a client is accessing their mail account using the web-browser, they do not have to store anything in their local servers and do not need mail servers locally but use all the resources of the service provider (Buyya, Yeo,  & Venugopal, 2008). This is because the service provider provides both the service and the infrastructure that is needed for storage and hence in the process offers cloud computing services. Their clients are thin cloud clients but majorly the clients of the service that is being offered by the company. A good example of such a model is Google mail which offers their clients with storage space for the emails that are both sent and received.

The models view the tools needed such a software, storage and the computer as an incremental product that the client can purchase with the need they have (Armbrust et al., 2009). This is different from the earlier model where the client would purchase the software and the computer before the service is provided. In this model of cloud computing, the end users can easily configure their environments easily compared to the earlier versions of the distributed computing environment where the end users needed knowledge of the deployment details. The model simplifies the work for both the end users and the organisation that is offering the service.

When the functions of the single computer owned by the end user are handed over to the data centres which are used by the service provider, the functionality is greatly eased. The end users are therefore only left with very less cost to incur for the connectivity to the cloud computers and hence the name thin clients. They only need a network that can help them connect to the data centres which are remotely located. The client, therefore, enjoys various benefits that have been provided by the service provider.

Software as a Service (SaaS). The type of architecture works basically like the thin clients where they provide services and the client can access the services using the thin client. The mode of access may not be necessarily a web browser. A good example is Gmail which offers their clients with the mail services and in addition offer cloud services which are very effective. The end user has no play in determining the deployment models and the design of the service. They receive a service that has already been fully developed and they only have to configure their environment and use the service is provided to them.

Platform as a Service (PaaS) the product as a service model of cloud computers is more complex compared to the software as a service since they require some knowledge which is needed in configuring the environment (Dinh et al., 2013). They offer they provide their customers with software development tools and programming languages that can be used by the developers to develop their own software. The developers can, therefore, use the available space to host their applications and the data that is used by the application. They mostly act as web servers. Good examples include Microsoft Azure. The users are given more control and freedom compared to the software as a service but the physical infrastructure is left in control of the owners.

Infrastructure as a Service (IaaS) with this type of cloud servers, the users are given more control compared to the others since they have freedom over the infrastructure and can be able to control their resources. The idea with the IaaS is that the clients can be provided with the hardware resources which they are allowed to utilise for the services they require to do. IBM computing is a good example that can be placed in this category. 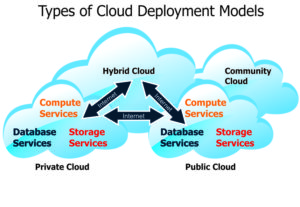 There are various strategies that are used in the deployment of the cloud services depending on which purpose they have been designed. The various cloud models include public clouds, private cloud, and hybrid clouds.

They are the type of cloud that is available for the general public and are the free-form most to use. A good example if the Google server which is open to all to use and they may customize it the way they want. They are not very secure compared to the other types of cloud services and hence not preferred by most people.

Microsoft is currently the largest cloud computing company in the globe. They have not been in the market for long but their commitment has seen them grow to become the greatest organisation with various products in the market. They have various cloud computing services from the platform. They have a big increase in the number of customers and have become the global leaders. They offer services such as Microsoft azure, Microsoft server and SQL server that act as the platform as a service products from Microsoft. They also have other services like Bing, Xbox and windows client.

They were the earliest in the cloud industry with the amazon web service being more than ten years old since it was launched and has offered cloud computing services to most of the small, medium and big organisations in the world. They were able to attract most of the organisations before there was much competition as there is now in the current market. They have been offering cloud computing and have evolved with time as the technology has been changing. They have been facing huge competition from Microsoft and Google who have been able to come up with more developed cloud services.

They were the first organisation to develop a software as a service type of clod computing and has since then achieved great numbers of customers. The company is American and has maintained most of their customers as with time they have developed various product which are needed by the customers. The organisation has been named as one of the fastest growing software organisations in the world and have been exemplary after they teamed together with Google to offer the services.

Advantages and disadvantages of cloud computing

Cost saving: Businesses can make profit no matter how many fields they have related to, they would love to reduce the capital cost as possible as they can for earn money at most. Cloud computing provides many different ways for companies to pay for the use of cloud stored, such as one-time-payment or pay-as-you-go and etc, which is convenient for companies to choose depends on their financial conditions. Moreover, cloud computing need no inner powder to store data and other application requirements.

Security: There is always a problem of how to keep the data stored of private users safe, hence, there must be a reliable service provider.

Limited accessibility: There is always need the internet connection for cloud computing.