Augmented and Mixed reality technologies (AR and MR) have recently come into the spotlight with prominent tech companies such as Facebook, Microsoft and Google racing to provide their own forms of augmented and mixed reality to the greater populous.

This paper will argue that while augmented and mixed realities can be utilised as a beneficial tool for society, it should be closely monitored as immersive technologies often lead to immersion and oversaturation of commercialised corporations within the private sphere of users lives.

To do so, I will first provide a brief history of the genesis of AR and MR technologies and provide a political-economic analysis of which companies are currently the fore-runners of the AR and MR sphere. I will then discuss the current social and cultural benefits of AR and MR technologies providing examples. Finally, I will argue that while AR and MR can be beneficial for society, if utilised incorrectly by capitalistic corporations for their own means, it might lead to an oversaturation of commercialised corporations within the private sphere of users lives.

Tom Caudell and David Mizell coined the term “Augmented reality” in 1992 to refer to the overlaying of computer generated material over the real world.

Caudell and Mizell sought to use AR technology to improve the manufacturing process of the Boeing 747, which required human interaction with extremely small parts, 5 million overall. The AR headset assisted the factory workers in a step by step process that did not require full computer generate graphics, but only 50 or fewer lines superimposed on the user’s actual surroundings (Caudell and Mizell, 1992).

Milgram and Kishino argued that Mixed reality (MR) incorporates any spectrum between the virtual world and the real world. Where VR is a fully immersive virtual reality world (1995).

While headset displays currently offer the most immersive form of AR or MR, smartphones such as Apples iPhone XS and Samsung’s Galaxy also include forms of augmented reality through the superimposing of images on the images produced by the smartphones camera. 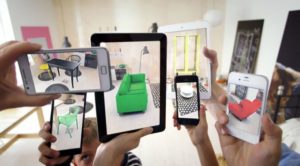 Currently the market in AR technology is dominated by smartphone technologies, with AR glasses not being common use in the public sphere (Walker et al., 2017). While Virtual reality is dominated by the Oculus Rift and the HTC Vive, and Playstation VR.

Pokemon Go, an AR game, was the first augmented app utilised by smartphones to top the download charts of mobile applications (Rauschnabel, et al., 2017). The app, launched in 2016, allowed users to interact with animal like characters superimposed over the real surroundings of its user. Niantic, the company that produced the app saw a stock price increase from $17.81 at date of release to dollars $56.69 at its peak use in January of 2018.

Facebook, Inc. and Apple have sought to capitalise on the estimated future growth of AR technologies with its development of both Apples ARKIT 2.0 to allow further development of AR apps, along with Facebooks testing of AR ads among its users and the development of Spaces a Facebook virtual reality available through the Oculus Rift and the HTC Vive.

Beneficial uses of AR and MR

The most common use at the present time for MR technologies is leisure, with over one million VR headsets sold in 2017 between Sony, Playstation VR, Microsoft, HTC vive, and Facebook, Inc, Oculus Rift.

AR and MR technologies are not limited to leisure, they also have been scientifically proven to be an extremely helpful learning tool in cognitively disabled children in helping with both visual, olfactory and auditory cues to help children in simple decision-making procedure (Richard et al., 2007).

Figure 2.1 – DermiCVR’s use of virtual reality to help children with vaccinations

AR and MR technologies also allow individuals who are not mobile to gain experiences that they otherwise would not be able to. Companies like Rendever allow the elderly to relive experiences and memories recreated for them from images supplied by the user.

Rendever allows its users to connect with each other and experience hiking up Maccha Picchu, going for a walk through Paris, and to view the creation of Picasso’s masterpieces. Their aim is to utilise AR and MR technologies in an attempt to minimise depression and isolation that 50% of residents will experience in age care facilities.

AR and MR technologies are also being tested for its use in medical applications for first responders, with AR allowing computer processed information to assist paramedics. 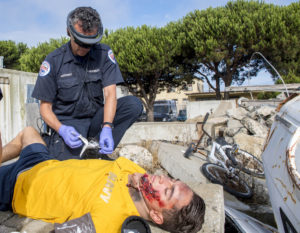 The Risks of AR and MR

While AR and MR technologies can be extremely beneficial in improving the quality of life of individuals that utilise their products, it is not without risks. The AR app Pokemon Go was responsible for 17 deaths to date and 56 injuries.

Pokemon Go was responsible for players trespassing and placing themselves in dangerous environments due to poorly placed digital objects in the virtual world. With more than a quarter of players reported being likely or very likely to play while driving (Wagner-Greene et al., 2017) .

AR and MR technologies are also developed with disabilities not generally in mind, with Microsoft HoloLens requiring no physical abnormalities of the head or face with only very limited size adaptive measures as the band is solid plastic. 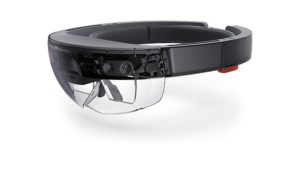 Along with exclusion of the disabled, within the capitalistic neoliberal lens, there is a growing concern of how corporations might use AR and VR to extort the populous.  Keiichi Matsuda coined the phrase Hyper-Reality, in his concept film to analyse the possible dystopian future in which capitalistic corporations infiltrate and saturate everyday life.

With augmented and mixed realities making their way into individuals homes and private spaces, marketing companies no longer need to ask permission to enter your premise to use your walls, fridges and personal spaces.

They would have the ability to forcefully press advertisements that inherently compare and judge the choices that you make, and further pressure you to consume, fuelling the capitalistic rat race.

The price of AR and MR technologies are generally expensive, with the Oculus Rift selling for $300 AUD and the Microsoft HoloLens selling for $4369 AUD. This provides a disadvantage for individuals whom might not be able to afford the latest technology.

If integrated into our everyday lives individuals might be exploited through cheaper AR technologies that are supplemented with a greater amount of sponsored ads or limited in the applications accessible, similar to methodology of Facebook Basics’ being implemented in third world countries.

It seems that with the rising popularity of AR and MR technologies, there is a growing need for governing bodies to monitor its ethical, social cultural and political implications, and regulate accordingly.

To conclude, while there are a broad range of benefits for the use of MR and AR technologies that include medical, leisure and to improve educational techniques within children with cognitive impairment, the downsides associated should also be analysed. AR and MR technologies often are expensive and unavailable to the working class, such as Microsoft’s HoloLens, they could potentially allow corporations access to the private sphere of our lives and could lead to Matsuda’s Hyper Reality. Companies that engage in AR or MR technologies should also be aware of digital objects and how the app might be used outside of its intended purpose, which could lead to an increase of harm to its users, similar to the deaths associated with Pokémon Go.

Milgram, P., Takemura, H., Utsumi, A. and Kishino, F. (1995). <title>Augmented reality: a class of displays on the reality-virtuality continuum</title>. Telemanipulator and Telepresence Technologies.

About Timothy Malek 2 Articles
A B. Sci/Arts student at Sydney University majoring in Philosophy and Chemistry with a particular interest in how the internet has shaped our society into a global community in which we all participate.