We are, as Derrida puts it, en mal d’archive, ‘in need of archives’ (1996: 57). We desire to consign information ‘in an external place’ (emphasis original), thus ‘assur[ing] the possibility of memorisation, of repetition, of reproduction, or of reimpression’; an act ‘indissociable . . . from destruction’, its effective opposite (14). That is to say we enshrine information in order to protect it, as a matter of providence, from future forces of annihilation; indeed Szekely sees the ‘utopia of a highly developed information society’ as one where all information is safely preserved and ‘made available for eternity’ (2014: 29). But in the present, archiving practices are seen as arcane and archaic, so to speak: largely limited to paper, filled with gaps in knowledge, particularly of ‘[t]he histories of minority groups, [I]ndigenous communities, women [and] children’, and naturally averse to community engagement (Allam 22 Sep 2013).

For these reasons, archives can just as easily be, and are, supportive of systems of oppression. It matters what information gets preserved and how, as well as the fact that the very preservation of information from destruction also risks opening the doors to revisionism, expropriation, and erasure. How can archives defend against these problems, while also doing the necessary work of increasing accessibility?

Upon mentioning paper, the mental image of the reader surely swings (mine certainly does) to dusty, ligneous, subterranean spaces, bookshelf after bookshelf bursting with yellowing secrets. But Derrida is writing Mal d’Archive towards the turn of the millennium, when email and web search engines — and personal computer use in general — are finally beginning to have serious lift off. He includes a brief consideration of email in his text, but cannot foresee the near-monopoly on information enjoyed by Google LLC.

I do not hesitate to say near-monopoly. Google Search’s global market share (the percentage of people searching with Google and not another search engine) stands at over 90% (Desjardins 23 Apr 2018), while in Australia, that figure is as high as 95% (StatCounter Sep 2018). A counterpoint to these unnerving, if unsurprising, figures is that Google merely disseminates information; its indexing algorithms are passive, apolitical, innocently carrying out their work. An algorithm is beyond reproach; nonhuman, nothing to be afraid of. This essay hopes to show how pernicious this and similar discursive stances are. How data is indexed matters for how knowledge is accessed, created, and shared; this is its value. Like all Silicon Valley giants, and perhaps most of all, Google knows the value of data. Where there is an assignment of value, to data and thereby the data subject, there is a power relation — not just in value differentials but in the very act of enabling an algorithm to assign value in the first place.

With its command of the online archives, Google is, as any global corporation surely should be, subject to endless discussion of ethics. Google search results can, after all, make or break individuals and organisations. Such was the plight of Mario Costeja González, a Spanish citizen who in 2010 lodged with the Spanish Agency of Data Protection a complaint against a Spanish newspaper and Google Spain and Google Inc., arguing that the two highest search results under his name, detailing 1998 proceedings regarding his repossessed home and social security debt, which had been fully resolved when the newspaper published them. The data was, he argued, therefore ‘entirely irrelevant‘ (EU Commission 2014; EU Court of Justice 2014). The Spanish Agency of Data Protection requested that Google ‘withdraw the data from their index and to render access to the data impossible in the future’; though the Court did point out it was very much a matter of context:

[. . .] inasmuch as the removal of links from the list of results could, depending on the information at issue, have effects upon the legitimate interest of internet users potentially interested in having access to that information, the Court holds that a fair balance should be sought in particular between that interest and the data subject’s fundamental rights, in particular the right to privacy and the right to protection of personal data (EU Court of Justice 2014).

This case, and this comment in particular, set the precedent for the right to be forgotten (herein RtbF), a precedent that saw Google receive ’70,000 requests to remove 250,000 search results’ within the first thirty-one days following the decision (Jones 2016: 27). Context is king, especially in legal systems that ‘embrace a notion of redemption’ (2016: 29); not all personal and/or legal histories are created equal. It does also however open the door to a deluge of requests for data erasure in the view of, as Jones puts it in the title of her chapter, ‘forgetting made easy’.

It’s important to note here that such requests are not primarily arguing against an algorithm as such; they are arguing against the use of information by human beings, access to which is facilitated by algorithms, in misrepresentative or ‘irrelevant’ ways. Nevertheless, Google drives the social memory through ‘algorithms that do not understand and do not abstract . . . that move in an eternal present’ (Esposito 2017: 6), and which are therefore liable to misrepresent the social significance of data because they cannot grasp how humans historicise and think the future, and thereby understand the social present. Put simply, the irreducible significance of context, of complex social relations, cannot be lost when considering what data should be shed, and what data should remain. Are there not some things that should never be forgotten?

To relevantly interrogate this question, I will draw the RtbF into the Australian context, and focus particularly on the potential for revisionism, expropriation, and erasure discussed above in the context of archival practice, ultimately landing at the concept of the contrarchive. Australia’s colonial history has been particularly susceptible to the former three issues. If we are to make informed decisions about the RtbF’s place in Australian digital regulation, we must understand the specificities of cultural memory, of the ‘“interplay of matter and sign” [resulting in] artefacts with an ideological or cultural reality, with their own language and methods of communication’ (Molloy 2015: viii, citing Bakhtin). What matter matters, what signs are significant, in the Australian cultural memory?

In this amusing TEDx talk, historian David Hunt glosses the Australian art of forgetting. We avail ourselves of a right to forget but it is only through epistemic (and first physical) violence that this can be achieved. Educative media sources like Blackfulla Revolution or The Australian Holocaust show how the assimilatory and exterminatory colonial project continues to suppress Indigenous cultures, histories, and lived realities. The injustices met on a daily basis by Australian Indigenous peoples receive little to no mainstream media coverage; just one example of how institutions such as the heavily imbricated Murdoch press, federal and state governments, prison and legal systems, and arts industries shore up the selective remembering of a colonial past and present that, according to sources such as the above, was and still is genocidal. 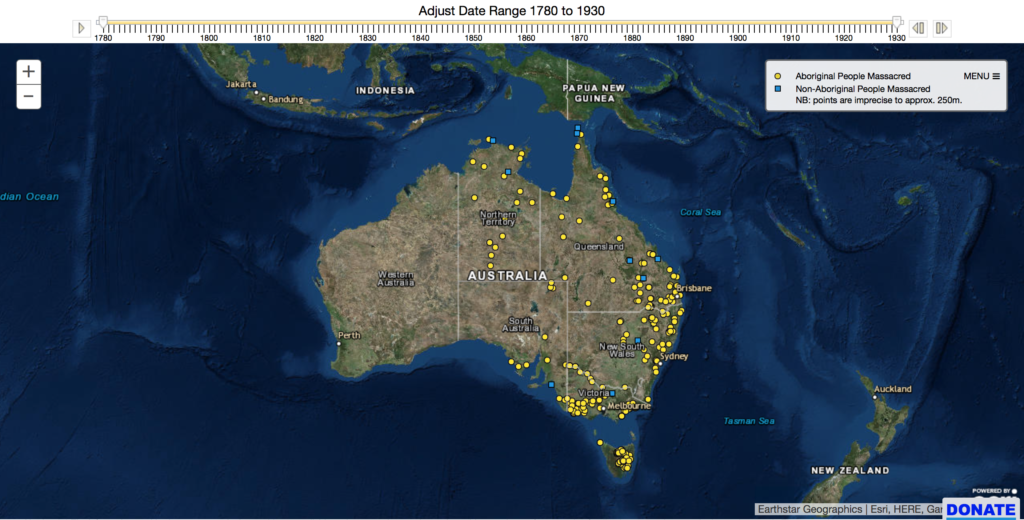 The above map (clickable), explained in further detail here (Brennan 27 Jul 2018) is a developing archive of massacres of Indigenous populations around the nation. Australians pay respects to fallen military servicepeople on annual occasions like Anzac Day and Remembrance Day and at monuments like the National War Memorial, yet ‘there is currently no national monument to colonial massacres of Aboriginal people’, let alone national consciousness for commemoration (ibid.).

This brief consideration of the Australian cultural memory serves to demonstrate that a fruitful Australian RtbF debate would first need to grapple with our cultural approach to remembering and forgetting. If we continue to denigrate and suppress Indigenous populations, alongside other minority and marginalised groups, we exacerbate the potential for libel and misinformation spread against them, something which occurs in the mainstream media very regularly (Baker 29 Mar 2018; Budarick 1 Aug 2018). If we are to stand up for the rights of the individual as in the case of González, should we not stand up for the rights of communities to categorically reject irrelevant, harmful, misinformational rhetoric?

The inverse is that continued instances of racism, sexism, queer- and transphobia, ableism, classism and so on, not to mention histories of interpersonal abuse and violence, should never be withdrawn from access by the public. Again, the discourse of what remembrances are in the public interest (e.g. for safety/security) must be developed to include those who practise epistemic as well as physical violence. Words matter. At the same time, a less punitive, more redemptive cultural approach to absolution should be advanced, in an educative spirit most of all.

While some may have the right to be forgotten, all of us also share a duty to remember. This all forms an active, continuous remembrance praxis, part and parcel of which is archiving anew. What Derrida really means by us being en mal d’archive is that we are in need of new, community, subcultural archives, of contrarchives — of counternarratives. These are already embodied in the work of educative resources like Blackfulla Revolution, The Australian Holocaust, Share our Pride and Australian Indigenous Astronomy, and in decolonial arts and media around the globe, and are more politically robust than the records continuum model, a detailed comparison with which is fertile ground for further study. The development and dissemination of contrarchives will evolve our understanding of facts, already so fraught in our post-truth age of absurdities, and our understanding of the normative, normalised epistemic violence that is carried out upon all of us, every day of our lives, as both data subjects and as subject to data.

Net Neutrality:Equal Rights and Equal Internet for Aussie or the Dead End?

Google employee sacked over diversity memo files unfair dismissal complaint Legal commentators say the case may get up by Mary NguyenAugust 10 2017, 6.08am   The Google engineer fired recently over writing a 10-page viral memo […]