Net neutrality’s main idea is “whether a network operator should be legally prohibited from prioritizing or blocking the delivery of certain types of traffic relative to other traffic on its network” (DeNardis, 2014, p.131). The net neutrality debates started when the Federal Communications Commission (FCC) announced the regulations towards the ISPs’ biased streaming rules in 2010 (Lee, 2015). Similarly, the European Commission introduced Open Internet Regulations in 2015 that allows net neutrality principle “internet traffic shall be treated without discrimination, blocking, throttling or prioritisation” to be enforced.

Klint Finley, a writer for an American magazine Wired, created a slideshow that explains net neutrality history in brief. The main events are:

The 2017 FCC decision to remove Net Neutrality Rules from the United States was made by Ajit Pai, who was made Chairman of the FCC at the start of the Trump Administration. In his comments, he made a particular point stating “The internet wasn’t broken in 2015. We weren’t living in a digital dystopia” (Shepardson, 2017). However this juxtaposes the evidence previously provided by Klint Finley’s slideshow which demonstrates that ISP’s were becoming bolder and bolder with how they controlled their users and their accessibility to content.

As we all know, laws and regulations come from the government. Net neutrality regulations are not an exception. When Barack Obama was in power, he believed that the internet should be accessible to everyone. According to The White House President Barack Obama website, he was a net neutrality believer before he became the President of the United States. Later, on January 15, 2014, a user created a petition on the White House’s We Are the People platform to recommence net neutrality and perceive internet providers as ‘common carriers’ and was signed by a large number of people (105,572). On May 16, 2014, the FCC proposed some rule-making changes for net neutrality to see what the public says. 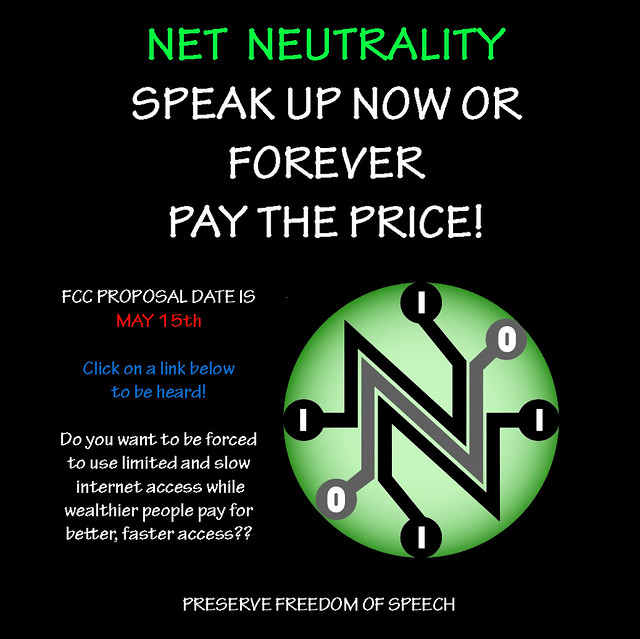 Pamphlet to vote for Net Neutrality, via Flickr, All rights reserved

Obama stated: “I personally, the position of my administration, as well as a lot of the companies here, is that you don’t want to start getting a differentiation in how accessible the Internet is to different users. You want to leave it open so the next Google and the next Facebook can succeed.” (The White House President Barak Obama, 2014).

With Obama’s involvement, the discussion got a boost and by September of the same year, about 4 million Americans supported the implementation of Net Neutrality regulations. However, the Trump Administration is against Obama’s net neutrality campaign which is evident from the removals of policy spearheaded by Ajit Pai.

The European Union also has had net neutrality regulations since April 30, 2016. They believe that every European should be able to access any content on the internet freely and every internet provider must not restrict user’s connection by any means.

Net Neutrality in the EU, via European Communication, All rights reserved

The European Union as a step towards maintaining Net Neutrality established the National Regulatory Authorities.

The research performed and the information that has been discussed, indicates that Net Neutrality is important to the long-term health of the internet, through equal user rights and unrestricted content access. However, Australia does not have net neutrality regulations yet. We need to delve deeper into the advantages and disadvantages to draw conclusions as to whether Net Neutrality is required for Australia or not.

Advantages and Disadvantages of Net Neutrality

There are several reasons why net neutrality regulations should be introduced in Australia. Firstly, net neutrality is a great opportunity for new websites to compete on the same level of difficulty with already existing large websites without any fees to promote them (Lee, 2015). The internet is similar to the business world where smaller companies try to enter the industry where large companies may have a monopoly. Net neutrality almost blurs the barriers for entry and it is a great news for a start-up business and/or website. It encourages big and small companies to improve their product.

An example of such a company which is familiar to everyone who uses the internet on a daily basis is Facebook. Facebook is a social media and social networking service that was created in 2004 and was competing with popular social media platform MySpace. Mark Zuckerberg did not have to pay internet providers so his website would appear on their network and every single device worldwide. The video below explains what net neutrality is, why it is good and provides an example of Facebook and MySpace.

Another reason for net neutrality implementation is a number of cases where carrier services blocking some voice calls applications that use the internet to make calls. As noted by DeNardis (2014), voice calls over the internet require Voice over Internet Protocol (VoIP) that “… breaks the digital signal into packets, and transmits these packets using the packet switching approach underlying the Internet” (p. 139). As a result, people use the internet data provided by the carrier and bills for communication over the carrier itself and carriers lose money because users do not pay for additional services (DeNardis, 2014, p. 141). An incident happened in Germany with a local carrier called Deutsche Telecom when they announced they will block all the calls via Skype if they are not made while using Wi-Fi. Net neutrality will prevent companies to block voice applications to allow users to make calls whenever they want.

On the other hand, there are arguments against Net Neutrality. Some people believe that net neutrality will discourage network owners from improving and experimenting on the applications that require internet access (Lee, 2015). Such applications are voice calling apps and online video games that require permanent connection to the internet while it is used and even a one second delay may strongly affect the outcome of the experience for users of these apps (Lee, 2015).

In addition, Lee (2015) mentions another concern: internet regulations may discourage big companies from investing in the completely new technologies that may radically change how we use internet today (Lee, 2015). The technology Lee (2015) talks about is an improvement of the internet speed that is being done with the use of new “fibre optic networks” that increase the internet speed up to 1 gigabit per second, however it cannot be applied ubiquitously due to the lack of investments. Net neutrality makes network companies less profitable and it pushes the investments that could have been done further away in time and it slows down the development of the industry itself (Lee, 2015).

John Gabriel, who presents the video above, says in the beginning that: “Net Neutrality means that the government will – one day – control the internet” (PragerU, 2018). The evidences that were provided earlier about governments prove otherwise. Governments (and more importantly leaders) who really are concerned about the quality of internet their citizens have, vote for net neutrality. This makes sense as Net Neutrality provides freedom of information for all users.

After discussing the Advantages and Disadvantages of Net Neutrality, I strongly believe that Net Neutrality should be introduced to Australia. The examples of implementation from the United States and the European Union should be models for what free internet and freedom of information are all about. Allowing Net Neutrality to live, ensures that there is room for new organisations to start, driving competition and innovation through the world. Implementing Net Neutrality is very import for the future health of the internet, ensuring George Orwell’s “1984” does not become a reality, contrary to Ajit Pai’s claims about the internet not becoming a digital dystopia.

BBC News (2017, December 14). What is net neutrality and how could it affect you? – BBC News. Retrieved from: https://www.youtube.com/watch?v=zq-2Yk5OgKc

Lee, T. B. (2015, May 21). Network neutrality, explained. Retrieved from: https://www.vox.com/cards/network-neutrality/what-is-the-open-internet-order

PragerU (2018, September 10). What Is Net Neutrality? Retrieved from: https://www.youtube.com/watch?v=aiZ8xwwycXA

About Sasha Alekseeva 3 Articles
An international student at the University of Sydney, majoring in Digital Cultures
Twitter