The state of copyright has become increasing contentious as our society and technology evolve. This essay argues that our copyright laws have strayed too far from the original intent of fostering cultural and intellectual innovation by protecting the financial interests of those with the view that created works should be indefinitely owned property. I will do this by exploring the emergence of a new content licensing scheme known as Creative Commons (CC) and its impact on creative works.

First, I will provide the historical context that led to the need for this innovation and the congruent example of Free and Open Source Software (FOSS). I will then explore how the Creative Commons licensing system was born out of the perception that modern copyright laws have swung too far in favour of institutional copyright holders. Finally, I will discuss how this emerging licensing scheme has impacted my daily life and how I see it developing in the future.

The Birth of Copyright

The Copyright Act of 1790 was created as an “Act for the encouragement of learning” with the explicit goal of creating a rich and diverse public domain of works for the common good. This version of copyright was drastically different from modern day laws. Those wishing to obtain a copyright on maps, charts or books were required to register and hand over copies to the required depository (Lessig, 2003). Rights over printing, reprinting, publishing and vending were then granted for a period of 14 years, with one 14 year renewal permitted if the owner was still alive. Lessig writes “most culture thus remained free of any copyright regulation” and the law allowed for almost any appropriation of current works.

This fostered a healthy supply of public domain work accessible to anyone that wished to draw from it. Such as Walt Disney, who drew heavily from the public domain works of the Brothers Grimm and appropriated them into the wholesome child-friendly stories we all grew up with. This same company is today scrambling to find ways to extend the copyright protection of Mickey Mouse, one of the most iconic and culturally significant cartoon characters ever created, and who turns 90 years old this year. For some time now powerful companies such as Disney and the Recording Industry Association of America (RIAA) have been lobbying Congress to drastically extend the scope of copyright law to strengthen their financial interests.

In response to what he saw as a “change in culture of the computer industry and its users” (William, 2002) Richard Stallman created the GNU project designed to foster the creation of free and open-source software (FOSS) through the use of their GNU-GPL license. This has lead to the creation of many Unix-based derivative works that power the vast majority of computing today and played a pivotal role in the emergence the vibrant FOSS community that tirelessly devote their time to create software that bolsters not only individual works but also heavily used in commercial applications.

Taking inspiration from the success of the FOSS movement, lawyer Lawrence Lessig set about creating the Creative Commons organization in 2001 with the express goal of building “a layer of flexible copyright in the face of increasingly restrictive default rules” (Bloemsaat & Kleve, 2009). The organisation has developed a set of easy to understand licenses aimed at giving content creators a straightforward way of expressing how a their works can be used or appropriated. It does so through four main tenets that a creator can choose from:

Unlike the proliferation and unmitigated success of projects utilising open-source software licenses such as the GNU-GLP, the success of Creative Commons is a little harder to quantify. FOSS has enjoyed enormous industry support, particularly in recent years, largely because it aligns well with business objectives. The vast majority of tech companies rely heavily on open-source projects and thus pour enormous resources into their own and other open-source projects. Microsoft, once considered the largest opponent of FOSS, has completely changed direction to become the largest company contributor (by number of employees) to open-source repositories on GitHub (Brodsky, 2018). This sharing of knowledge and employee effort is unprecedented and is responsible for a significant portion of the technological progress we have seen in recent decades.

Unfortunately we don’t see the same level of industry buy-in with Creative Commons licensing. In fact it will be a cold day in hell before the RIAA comes out in favour of any form of licensing aimed at loosening the grip on creative works that they have spent decades tightening.

However, that is not to say we have not seen significant adoption of CC licenses within large organisations. Many public broadcasters such as the ABC (Australia) and CBC (Canada) have been prominent proponents of CC licenses on not only new but also archrival content (Pappalardo, 2012).

We have also seen strong, steady growth in Creative Commons licensed works, with a 10-fold increase between 2006-07 to almost 1.5 billion works. 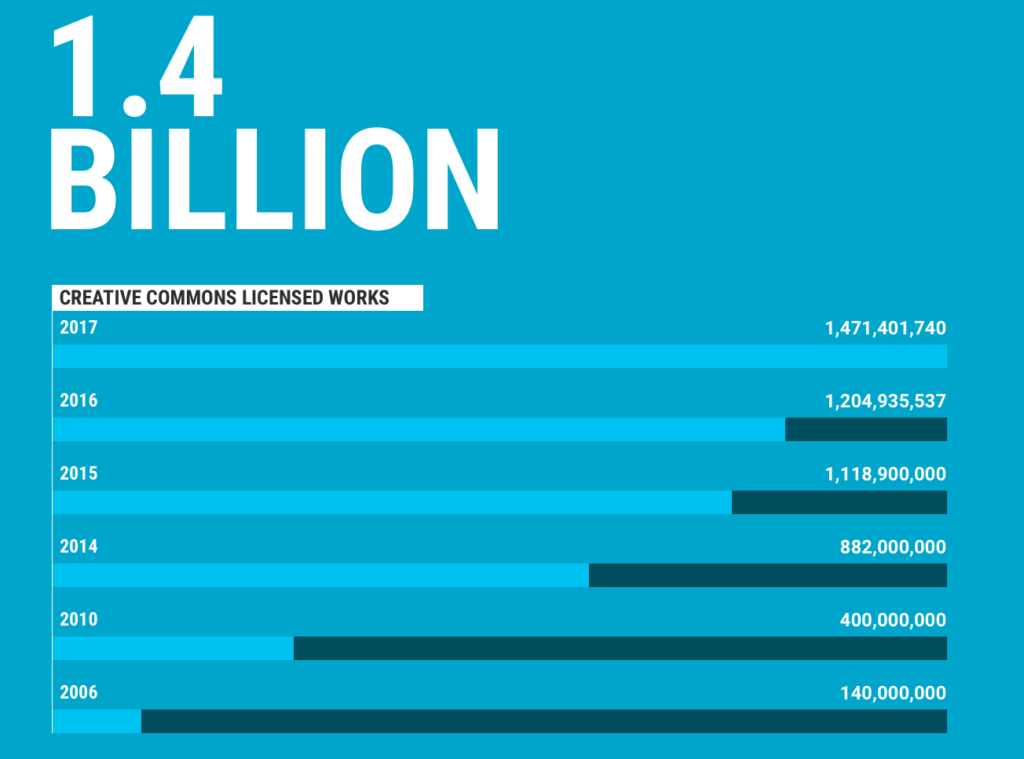 This is assisted by large content distribution platforms embracing the licensing scheme, with flickr alone hosting over 400 million CC licensed images. I believe these platforms are vital to the success of Creative Commons, with the ease of both setting and attributing a license being crucial factors in its adoption.

Modern copyright law is seen by many to actively hinder creativity, such as director Davis Guggenheim expressing his frustration at the fact that before can shoot any scene for a film he must obtain legal clearance not just for the story or soundtrack but for incidental billboard or brand that may find itself in the frame (Geach, 2009). To this extent, copyright has a stranglehold on the creative process, with creators spending more time with lawyers than behind a camera. It would seem that the only thing that can lessen this burden on creators will be a re-framing of copyright law, something that is only possible with broad support from stakeholders.

We also see the same fear being brought to music production, with artists shying away from even taking inspiration from previous works. Being a musician and aspiring producer I have a keen interest in the innovation Creative Commons is fostering throughout creative industries. I firmly believe in the relocation of rights back to their creators and away from industry bodies whose sole interest lies in the commodification of said rights.

Everything is a Remix

In his documentary “Everything is a Remix” Kirby Ferguson (2015) outlines the importance of inspiration in the creative process and frames all creative works as an evolutionary process where we “copy, transform and combine” previous works. It outline the extent some creators have gone to in order to hide this fact, either to feign the appearance of originality or to distance themselves from what has become a litigious feeding ground for anyone believing something sounds even remotely similar to their own work.

Everything is a Remix Remastered (2015 HD) from Kirby Ferguson on Vimeo.

I believe this “remix culture” is vital to the proliferation of a healthy creative community and as such I encourage artists that I work with to release under a CC license that allows derivative works to be created. We are seeing an emergence of a strong community utilising such licensing on SoundCloud, which has always been a popular way for artists to bypass a record label and self-release their own music. SoundCloud have made it simple for people to choose an appropriate CC license when uploading music: 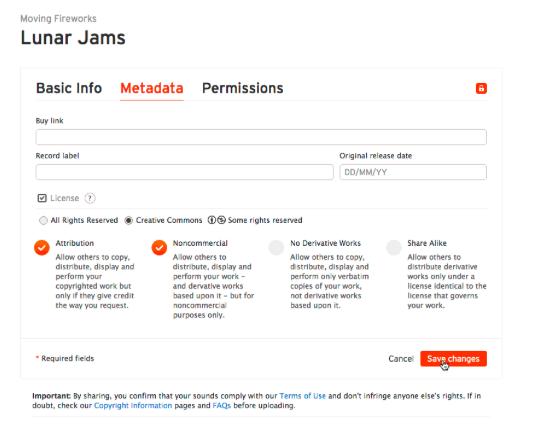 Creative Commons is also making inroads into the design community, with many more resources and tools becoming available under the license however I would like to see sites like Dribbble and Behance make the licensing options more apparent within the interface rather than leaving it up to the user to explicitly state in the description. Due to its proximity to tech circles, I envisage this move towards a more ‘open’ sharing of assets will continues to thrive alongside open source software.

Copyright law has always intended to strike an appropriate balance between protecting the interests of content creators and fostering both cultural and technological innovation. I argue that modern copyright law is skewed too heavily towards protecting powerful company-held copyrights at the expense of furthering the cultural “Common Good”. I see the Creative Commons project as a step towards restoring a more sensible balance in licensing creative material and I am heartened by the growth in adoption of these alternative licenses aimed at returning control back to content creators.

About Stephen 2 Articles
7th year university student trying to make it his last.

How Effective Is Creative Commons as a Copyright Tool?

The rights granted to copyright owners are increasingly challenged in today’s rapidly changing media landscape. Copyright law constitutes a significant cost to the creative process, as individuals are restricted in the use and reuse of […]

Adhere to Aadhaar? Do YOU want Biometric Identification in Australia?

I’m creating and sharing what I love!

YouTube is one of the most popular video sharing platform and the second most visited website worldwide(Bärtl, 2018). It has created the platform for people to share videos as user generated content to interact with […]