What is Biometric Identification? 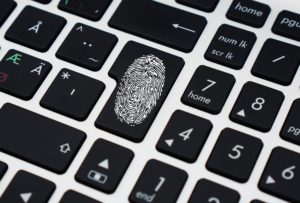 A fingerprint on keyboard; Image: Pexels, all rights reserved

Biometric identification is defined as the process of recognising an individual using their physical and behavioural measurements. Biometrics are effective for identification as features such as fingerprints are universal, robust to change and most importantly, unique (Smith, Mann & Urbas, 2018, p. 20).

The first use of biometrics date back to prehistoric times where palm and footprints found to mark territories and individualise art. In the 19th century, fingerprints were first used to identify criminals from crime scenes and by the 1920s fingerprint identification was adopted globally by law enforcement and primarily stored using a paper system (Kindt, 2013, p. 17:20).

However, it was not until the digitisation of biometric data that wide-scale identification was possible. With the ability to easily store and compare biometric data, identification occurred fast and reliably. Contemporary uses include DNA evidence in criminal investigations and facial recognition for anti-terrorism systems in airports (Muller, 2010, p.32).

Aahaar is used in a variety of services from education, disabilities services to opening bank accounts as outlined below.
http://https://www.youtube.com/watch?v=QkW1GBJW2C4 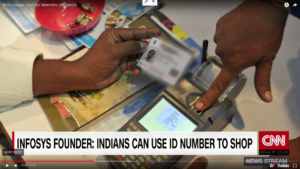 Biometric Identification in the Australian Context

Proving your identity is the first step in accessing any welfare system. Biometric identification, compared to hard-copy documentation such as birth certificates and passports, are more resistant to replication, document fraud and hacking. In addition, Van Hamme and colleagues (2018) denote that, not only do biometrics optimise security and privacy but is easy and intuitive to use, making it suitable for widespread adoption.

“Ration cards have barcodes…often they are copies, and ration dealers claim false sales as a result. With Aadhaar, there is no risk of this, because control will be biometric” (Masiero, 2016)

Applied in the Australian context, Commonwealth Ombudsman (2014, p.40) reported that Centrelink, a welfare system for Australians, processing delays and rejections often involved re-identification issues. In particular, updating these documents at a Centrelink branch is time-consuming and, if these documents are expired, are expensive to replace.

The problem with Australia digitalising identity using biometric identification surrounds data security — in particular, who owns and controls it. Nelson (2017) critiques the lack of protective legislation during the genesis of Aadhaar, in the reoccuring security breaches of citizen’s personal data.

Unlike India, in Australia the sharing and storage of biometric data are protected by the Privacy Act 1988. In addition, privacy is optimised as institutions, whether from the public or private sector, will need to undergo accreditation against Digital Transformation Agency (DTA) Framework before any data, not only biometric, will be collected.

Angus Taylor Minister for Law Enforcement and Cybersecurity in the Turnbull Government expresses “A successful digital identity has to be driven by the user, controlled by the user and managed by the user as they see fit.” and emphasises a multistakeholder approach to data collection “…this means having a federated decentralised architecture.”

A prime example is the development of Digital ID by Australia Post, which aims to use facial recognition to provide digital identification through an app which replaces physical driving licenses and passports for use within Australia (Whitepaper, 2016). https://www.youtube.com/watch?v=kj6jDLcct1s

“1. Limiting the collection, use and disclosure of personal information to a narrow purpose
2. Minimising collection and retention of information and keeping data stores separate
3. Giving users choice of how they verify their identity
4. Giving users control through consent and transparency”

Having autonomy of data and decentralised system for data collection and storage is imperative for the success of biometric identification. These frameworks act as preventative measures, which prevent the misuse of citizen data in political, economic or social gain.

On the flip side, to reap the innovative benefits of biometric identification, all citizens will need reliable access to the internet.

In light of Aadhaar, Masiero (2016) describes digitisation of identity may inadvertently discriminate towards groups which need help. For example, in some Indian rural villages there is no stable connection to electricity, as a result, subsidies cannot be claimed on food due to technology failure. Despite a relatively higher internet and electricity penetration in Australia, there is still a technological divide.

Masiero (2016) also posits that groups such will illness such as leprosy and deformities will not be able to use biometric identification due to changes or absence of fingerprints and facial structure as a result severely affects accuracy.

Anecdotal reports show that “teachers who work for a government school in Delhi. They spend their spare time working with children [homeless] in the slums, helping them get ID so they can enrol in school” However, above problems results from Aadhaar being the only source of access to these services.

With previously discussed Digital ID and GovPass, prospective uses are mainly for identification purposes. However, if only one type of biometric data is collected for identification, this can severely disadvantaged groups with disabilities and deformities. Moreover, implications are

on any group in Australia is heavily dependent on the systems which rely on it.

The national digitisation of identity using biometric identification is hotly debated. Despite Australia’s awareness of data misuse concerns discussed above, the ever-changing political climate is cause for concern, particularly regarding attitudes towards data protection.

One cause for concern is proposed law “Data Sharing and Release Legislation” which argues for the implementation of a centralised database for all government amenities, with the ability to override ‘conflicts’ with the Privacy Act 1988.

However, these are potentially indicative of data misuse and corruption.

This is revolting. How can Australia treat it's citizens like that? #privacymatters

Australian government plans to do a Facebook on citizens' data • The Register – https://t.co/brkQeHGben

How will Biometric Identification affect us?

O’Sullivan’s (2013) research denoted that everyday internet users are indeed concerned about security and privacy with the online use of biometric identification. However, despite these reported concerns, O’Sullivan found the most participants online behaviour did not reflect this with

“…25% switched off security settings to improve performance and 46.6% would register their details regardless of any privacy concerns to purchase the item they require”

With the move towards biometric identification, both users and regulators of the internet need to take more proactive security measures.

Overall, the implementation of biometric identification in the Australian context is still up for debate. It has the potential to revolutionise Australian welfare systems and increase efficiency in the workplace and everyday life. However, biometric data is subject to political and personal misuse and may inadvertently marginalise groups with are unable to use these systems. If robust systems for citizen data protection and security are a prioritised and the use of biometrics do not entirely replace paper documentation or hinder access to services then the nationwide implementation of biometric identification is recommended.

Grayson, I. (2017, April 09). Digital ID must be driven and controlled by users: Angus Taylor. Retrieved from https://www.afr.com/news/special-reports/digitising-government-services/digital-id-must-be-driven-and-controlled-by-users–angus-taylor-20170407-gvgbgu

Ramachandran, A. (2018, February 13). What is it like to live in the world’s biggest experiment in biometric identity? Retrieved from https://howwegettonext.com/what-is-it-like-to-live-in-the-worlds-biggest-experiment-in-biometric-identity-ef2490372819