In 2016, a mobile game named Pokémon GO swept over the world. Relying on augmented-reality (AR) technology, it visualizes a virtual Pokémon on users’ phone camera view, to create a sense that they are catching a Pokémon in real world. It has succeeded in the popularizing of the concept of AR, making AR a household name. However, most people’s cognition of AR remains at a superficial stage, as they only have heard about it. In this essay, the genesis of augmented reality will be discussed, as well as how significant it is, and the main business in this field. Also, who benefits from it will also be analyzed.

AR might not be as new as people think it is. In fact, it is a concept that has been existed for about 50 years. It refers to a technology that increases users’ perception of the real world through adding computer-generated information to it (Carmigniani et al., 2011).

The earliest application related to AR was used in the military in 1950 (Pesce, 2017). By converting complex flight data into easily understandable graphics, the fight control system of jet fighter was designed to help pilots make instantaneous decision. Although there was no concept of AR at that time, this unintentional innovation pioneered the application of AR.

Then, the first intentional research of AR (mix reality) can go back to Morton Heilig’s work (Carmigniani et al., 2011). In 1962, with the thought of “cinema is an activity that would have the ability to draw the viewer into the onscreen activity by taking in all the senses in an effective manner” (Carmigniani et al., 2011, p. 342), he built “Sensorama”, a machine that ensured users to feel the scene of riding a motorcycle on the streets of Brooklyn. This advanced idea and equipment took the first step for the development of AR and VR technology in the future. 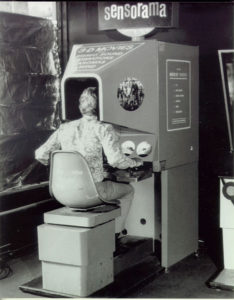 Next milestone in genesis of AR technology is “The Sword of Damocles”, which was developed by Ivan Sutherland in 1968. Different from the “Sensorama”, which has an ambiguous orientation between AR field and VR field, “The Sword of Damocles” has a more specified orientation, as it is an origin of head mounted display in AR field (Carmigniani et al., 2011). It can convert a simple wireframe into a 3D image. As a result, user can see a 3D image in the real world through the headset. Moreover, it is interactive (Pesce, 2018). System will track the users’ seeing and their head direction constantly, to keep project a real time 3D image in front of them. Its appearance provides a prototype for the future development of Microsoft’s and Google’s display devices. 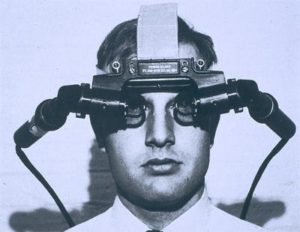 “The Sword of Damocles”

How it is part of the historical trends in information management

From the previous application of the library to the current using of cloud computing, they all show that information management is becoming more efficient and simply. However, invisible data only exist in the 2-D world (Porter & Heppelmann, 2017). People have to convert the 2-D data in their minds before they use it in 3D world, which will consume their energy, therefore, declining the efficiency of information management. For example, when people use GPS navigation, not only do they stay aware of the changing road conditions (physical information), they also need to separate some of their attention to look at the GPS images (2D information), to mentally overlap these images with the actual road. People will have trouble managing information when they constantly switch between these two different types of messages.

However, the arrival of AR blurs the boundaries between digital and real world, and blends them in to a seamless whole (Pesce, 2017). It acts as a bridge to propel information management from plane data to 3D scenes. As mentioned above, AR is a technology that can convert 2D data into 3D images into the real world. In other words, people can process both types of digital and physical information simultaneously, without spending any energies in the conversion process. They no longer need to pay attention to both road condition and the navigation screen, as AR technology will map the GPS information directly to the actual road. Thanks to what “hallucination” AR can offer, one can manage their data more easily. 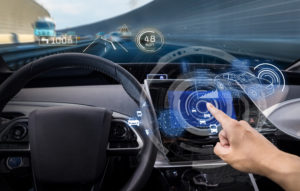 While promoting information management into a new way, using AR to manage information has also intensified a controversy about user’ privacy. There is little online privacy left to people now. Their online browsing history can be tracked by cookies and their social circles are being monitored by Facebook (Pesce, 2017). Real world life has become their last utopia without being monitored. But the emergence of AR is possible to deteriorate the status.

To project virtual information to the right place, AR must continuously scan the real world, which means that it will become a surveillance equipment that users carry around for monitor their own (Pesce, 2017). Which bar user go to, who they talk to, everything they experienced in daily life could be recorded and uploaded, even if they never post online. Moreover, nobody knows that who will control these data or what it is used for. Therefore, once AR technology is popularized like mobile phone, the last privacy that people can seize might no longer exist.

Who owns the key business?

There is no monopoly in AR field, as everyone is at the beginning. Therefore, here are some big companies in different types of AR devices:

Although Magic Leap is a relatively new company, its investors are some industry giants, such as Google and Alibaba. Its product Magic Leap one was released two months ago. Slightly different from HoloLens, it claims that it can project digital light field into user’s retina, thereby enhancing the realism of virtual information (Huet, 2015).

In the field of phone AR, Apple and Facebook have their own selling points. Apple’s ARkit was introduced at the fall conference in 2017. In short, it is a framework that enables all Apple device with the iOS 11 system installed, to process AR by their camera (Williams, 2018). The strategy of Apple focus on mobile phone.

At the 2017 F8, Mark Zuckerberg announced that Facebook is going to enter the AR domain, then presented the plan of ‘Camera Effects Platform’. This plan aims to ensure Facebook camera to run more AR (like Faceu but much more than it), to construct their own application ecosystem in the future through the in-app camera. Different from the Apple, Facebook’s strategy focuses more on their application.

Who benefits from the transformative effects and who does not?

AR Corporations will be the biggest winners both politically and economically. The international theme of the coming decades will be the development of science and technology, which can be proven by the continuous increase of investment in scientific research and education in North America and East Asia (UNESCO Institute for Statistics, n.d.). Therefore, the government will issue preferential policies related to AR technology, to encourage and support the development of AR industry nationally, because of the revolutionary characteristics AR owns. In China, commanded by chairman Xi, the Shenzhen government has partnered with HTC to set up a $15.8 million “chairman fund”, to help domestic AR and VR companies. With financial support from the country, the AR industry can focus more on the research and development of technology.

In the economic field, the gradual recognition of AR will open a new consumer market. As mentioned above, the public care less about AR until the explosive popularity of Pokémon GO in 2016, which means that its market is almost unexplored. At the same time, people show unusual interest in AR. According to Google trends (n.d.), AR has been the hot word searched worldwide since 2015. The potential customers for this market are huge. As a result, businesses were given the opportunity to become “Columbus”. Faceu is an example. While the market of special-effects cameras in China was blank, the AR effect of its in-app camera has attracted countless users, thus bringing it a lot of money.

However, benefit of economic change can’t cover every business. At present, the consumable hardware of AR is not yet popularized, there are few places where AR services are truly provided. Moreover, as the immaturity of technology, AR’s head-mounted equipment is costly, while the product itself also has shortcoming. These factors will affect businesses’ earnings. Companies with sticky users like Faceu are just minority, as it is successful in capturing people’s love of cuteness and their habit of taking selfies. Therefore, AR companies, especially those that focus on head-mounted display and mass market, have yet to benefit from economic change. Google glass’s suspension of production is still in sight. It did not bring much profit to Google because of its poor performance in real life and high cost.

Lastly, for those people who cannot afford the equipment or have no willing to buy the equipment, they cannot benefit from the social changes brought by AR. Once AR is popularized, individuals’ way of accepting information will be changed, as AR will continuously enhance their ability to perceive the physical environment around them. Consequently, those people’s right of accessing information freely will be threatened, by the threshold that is set up by AR. Because they have no way to receive those information that only exit in digital reality without medium. Imaging a situation that a digital view only become visible to those devices-owned people, users without devices will suffer from a new form of discrimination.

In conclusion, AR is not a new technology that emerged out of nowhere, and it has the potential to enhance the information management to more convenient and efficient. Companies, which can compete fairly in this field, are both beneficiaries and potential victims of change, while people may be disturbed by the discrimination that comes with the change.

UNESCO Institute for Statistics. (n.d.). HOW MUCH DOES YOUR COUNTRY INVEST R&D? Retrieved from http://uis.unesco.org/apps/visualisations/research-and-development-spending/

Williams, A. (2018). What is Apple ARkit: Everything you need to know about iPhone AR. Retrieved from https://www.trustedreviews.com/news/what-is-apple-arkit-3286676