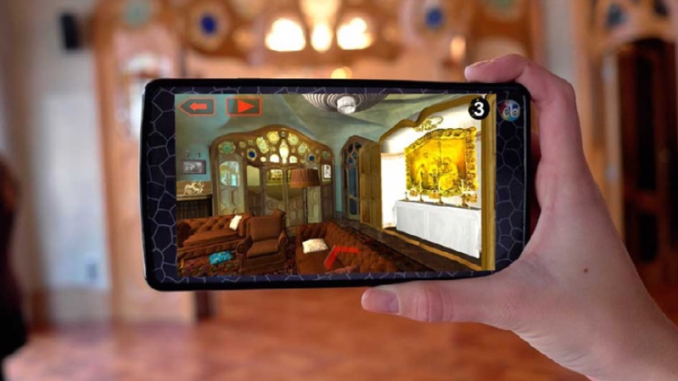 Casa Batlló is one of the most outstanding works designed and built by the world-famous Spanish architect Antoni Gaudí in Barcelona. Its unique architectural appearance and imaginative inner decorations attract a rather large number of visitors every year. As a cultural heritage with more than one-hundred-year history, the museum is responsible to protect its antique furniture and decorations while at the same time, to ensure that its visitors would enjoy a rather immersive tour and have a more complete understanding of the building itself and the life of Gaudí. To achieve this goal, the Casa Batlló Museum has introduced the Augmented Reality technology into their original audio-guide devices (see Figure. 1). However, the Casa Batlló Museum is not the only example of applying the entertaining AR guide to cultural and educational institutions.

In recent decades, the emergence and popularization of the Augmented Reality especially the indirect AR technology has provided a novel approach for the future indoor tourism, and it could be applied for places particularly museums and galleries to benefit both the cultural institution and its visitors.

This essay will start with the discussion of the genesis of AR and focus more on the development of the so-called indirect AR technology defined by Wither, Tsai and Azuma (2011), and then explore how AR has been adopted for cultural and tourist sites as a potential guide which on the one hand, offers visitors the immersive entertaining and educational tour, on the other hand, help the institution protect the historical heritage and gain commercial interests.

The Emergence and Further Development of AR

AR, short for Augmented Reality, is defined as “a real-time direct or indirect view of a physical real-world environment that has been augmented by adding virtual computer-generated information to it” (Wikipedia, 2010 in Carmigniani & Furht, 2011, pp. 3). Although AR has become the focus of public’s attention only for recent decades, this concept was first mentioned by Morton Heilig in the field of cinema as a concept in 1950s, and further developed by Ivan Sutherland who invented the head mounted display and then the whole AR system in 1960s. Although both concepts have been discussed together and compared with each other, there are quite distinct differences between VR (virtual reality) and AR. Not like the VR which offers a complete technology-constructed environment, AR is still based on the reality with technological process to enhance it (see Figure 2). It is believed that the first functioning immersive AR system was built by L.B Rosenberg in 1992, and with the development of other technologies such as camera systems and locating functions, an increasing number of AR applications especially mobile applications have been developed (Carmigniani & Furht, 2011, pp. 4-5).

The popularization of mobile phones allowed more people to be aware of the AR technology, which in turn brought more opportunities for AR to evolve. People desired more convenient way of enjoying AR instead of depending heavily on computer programs, as well as broader use of the AR technology for outdoor activities since the head-wear device restricted the area of identification. However, mobile devices were not powerful enough to provide accurate augmented scenes, and Wither, Tsai and Azuma have therefore introduced the concept of indirect augmented reality (indirect AR) in 2011. Different from traditional AR which generated the scene based on the real-time captured images, indirect AR became more virtual. In indirect AR, the background environment which should be captured by the real-time camera, has been replaced by panoramic images of the real scene, in other words, the indirect AR does not deal with the issue of framing the real world, but the selection process of the specific pre-captured panorama.

Indoor Tourist Applications based on AR

AR technology has currently been used for different fields, for example, games, medical training and environment planning. Tourism, as well, could be regarded as a potential kingdom waiting for AR to fully explore. Nowadays the majority of AR applications designed for tourism focuses on the outdoor tourism. The Museum of London has once developed the so-called Streetmuseum application. As suggested by its name, this application allowed its users to discover the historical pictures of the street they captured through the camera within their mobile phones (see Figure 3), and those pictures were actually the collection of the Museum of London which would be better understood by visitors through the AR-involved approach (Kounavis, Kasimati & Zamani, 2012, pp. 3). 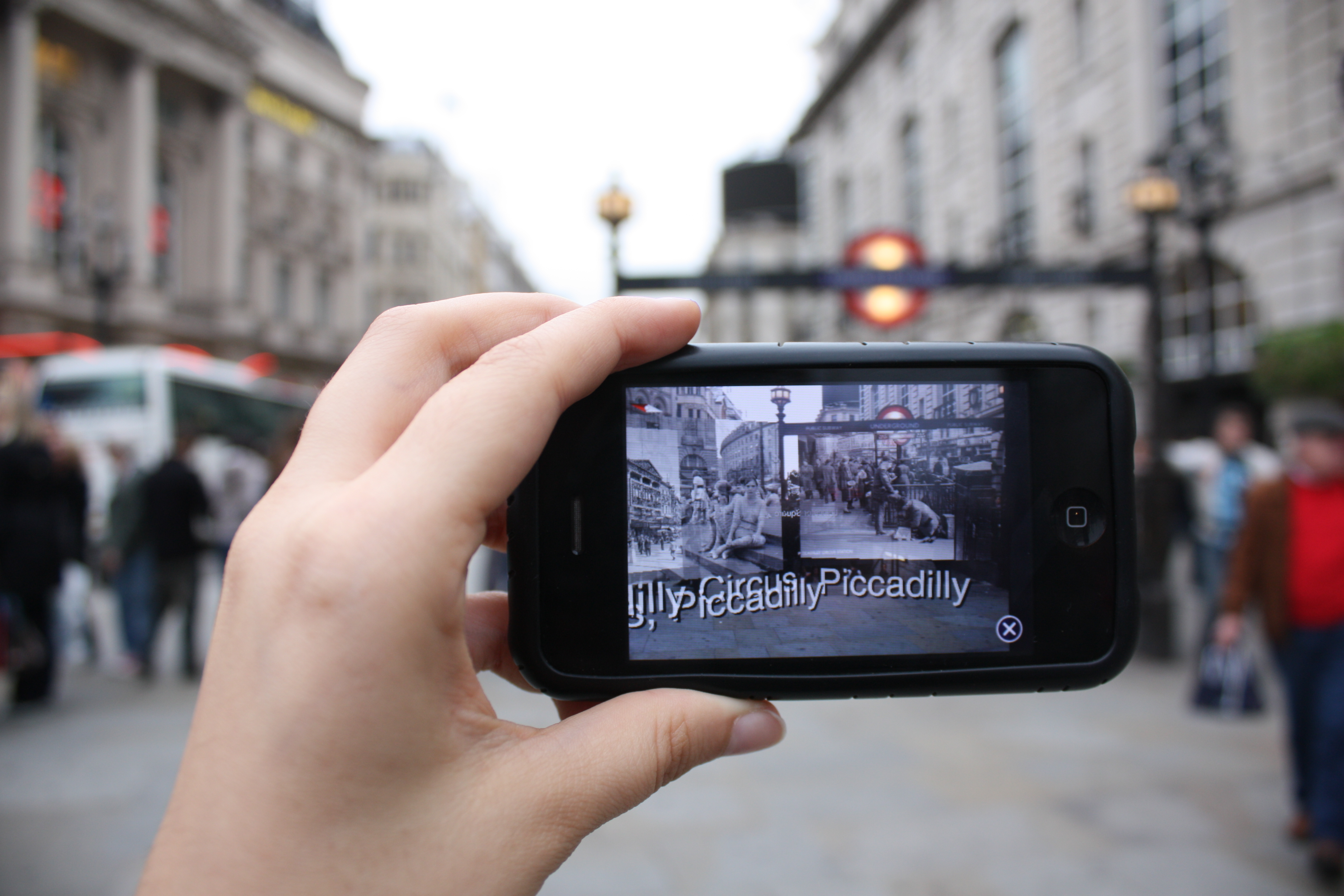 However, as mentioned before, in terms of the indoor tourism, the Casa Batlló Museum is not the first and only example which introduced the mobile AR-based application to its visitors. Both traditional and indirect AR technologies have been applied for cultural tourist sites such as museums and galleries, however, their different features have determined their different advantages and limitations.

Traditional AR technology are usually related to the positioning technology, and are more suitable for spacious spaces with nice light and Internet conditions.

Places such as the Museum of Fine Arts in Renner, France and the Sutton Hoo British Museum have applied the QR-code-based applications to build the augmented scene and interact with visitors. They placed the QR code next to the artwork or within some certain locations to ensure that their mobile AR devices or applications are able to identify those codes, and then generate the augmented image with the software technology (Gimeno et al., 2017, pp. 95-6). Compared with other positioning technologies such as the GPS or the Wi-Fi, QR codes could indeed provide visitors with more convenient and accurate experience, however, this kind of use of traditional AR with the QR code could still be influenced by many uncontrollable factors, for instance, it might be blocked by other visitors unconsciously (see Figure 4). 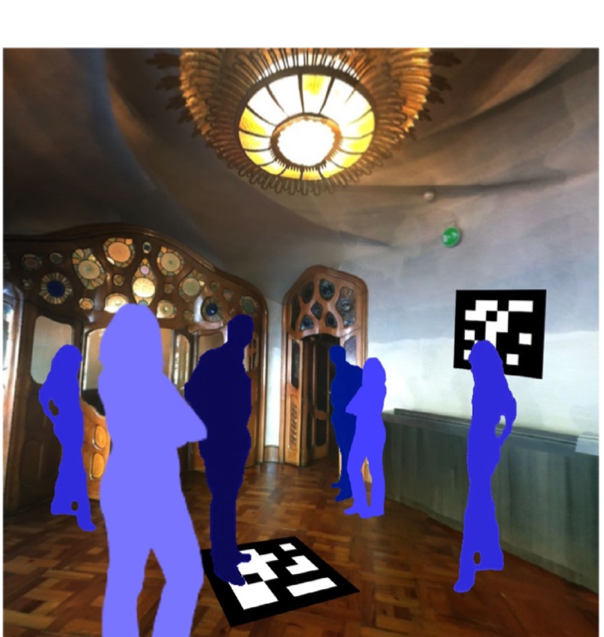 According to Ginemo and his colleagues (2017, pp. 96-7), although the concept of indirect AR was first constructed for the outdoor AR practices, it is also appropriate for indoor tourist activities, especially for places as the Casa Batlló Museum which does not have large space for its visitors or good lighting conditions for the traditional AR (in fact, the Casa Batlló was at first a private house of the Batlló family).

Still using the Casa Batlló Museum as the case, the position of the AR device could be just calculated and determined by Bluetooth sensors (which means that it might not be very accurate), since the blending process of the real environment and virtual objects has already been completed offline. Besides, considering of the architect Gaudí whose designs are always full of symbolism and novel imaginations, the AR guide also contains the animation of animals which have been abstracted as decorations inside the house (see Figure 5).

Two-sided Benefits of the AR Tourism

It is without any doubt that the AR guide is able to guarantee visitors a more immersive experience and a better understanding of the specific artwork. And since most of the AR guides are conducting on personal devices (or personal smartphones), the AR guided tour becomes more organized and personalized. With the digital menu, visitors can choose to either follow the instruction to visit in the recommended order or start with personal interests. Moreover, the AR guide could display every angle of environment, which leaves visitors great freedom to enjoy the personalize the content and service.

For cultural institutions, there are mainly two benefits from both cultural and commercial perspectives. The virtual technologies could be considered as the digital replacement of the real heritage, which provides visitors rather real experience without the complicated protections of the real antiques. Some researchers believed that “well-designed experiences may increase customers’ willingness to pay”, and according to He and her colleagues’ research, highly virtualized environment does help improve the purchase intention of visitors through enhancing the aesthetic experiences (2018, pp. 128-32).

To conclude, the AR is not a rare technology today and could be found from many different fields. This essay focused on how traditional AR as well as the indirect AR have been applied to the realm of tourism especially the indoor tourism, offering an analysis about the AR guide used for museums and galleries. Considering of the benefits AR brought to both visitors and cultural sites, it seems to appear the tendency that AR would become one of the most basic or necessary approaches for the indoor tourism.