Net neutrality is a concept that allows individuals access to the internet freely without any barriers and all the internet data is separated equally without discrimination, thus internet providers cannot slow down or even block users accessing specific internet content. This concept was proposed in 2003 by the media law professor of Columbia University, Tim Wu.  The main controversial argumentation of net neutrality is whether the network should be governed by the government and other enterprise and media companies. In my opinion, net neutrality should not be established in Australia owing to four aspects; the idea of providing high quality of internet services to every user is unrealistic, cyber security is needed to protect users, restriction is required to filter inappropriate content and government can extract sensitive information and combat illegal content.

Firstly, one of the opposing reasons is that the idea of dividing data to every user equally cannot be implemented as the internet providers cannot offer high quality of internet service; nevertheless, Australia has several internet providers, such as Optus, Telstra, iiNet and TPG. When one of the users used a large amount of bandwidth-intensive applications, the quality of other internet users will be lowered (Denardis, 2014). Therefore, if two individuals send a video and a message respectively, the speed of sending the message could be lowered, thus an unfair circumstance is created due to the limited source of online data. Thus, other individuals will experience latency as sending a video requires a large amount of data. As a result, the internet discrimination will occur and will violate the principle of net neutrality as the aim of net neutrality is to allow individuals enjoy the internet data equally. This raises the question of the priority of providing internet services to individuals. 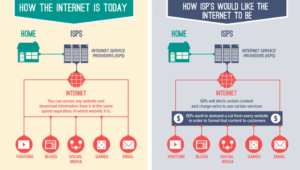 Why you should care about Net Neutrality. Medium. All right served.

Furthermore, there is a case which best illustrates the possibility of true net neutrality in Australia no longer existence. Most Aussie Netizens are aware that ABC iView is unmetered when accessed via certain providers (Mclaren, 2015). However, the ABC has never paid for this service. Therefore ABC iView attracts extensively more viewers than similar competitors. Besides, it also reflects the truth that volumetric pricing is a clear network management practice which is fair to the customers.  To sum up, net neutrality is an ideal goal, but classifying the individuals into different categories of consumers depending on the amount of money paid will be the best solution which also matches with the current situation in Australia.

Secondly, cyber security is another vital reason that the internet should be governed by the government and companies. According to the reading of Denardis, Internet security is regarded as the center of national infrastructure protection and is the responsibility to protect data transaction and individual identity and privacy as posing a threat towards information infrastructure is tantamount to threating the financial and industrial systems that basic social and economic life depends (Denardis, 2014). In recent years, computer worm has been common used to attack various systems in different websites as it is a convenient virus that does not need to manipulate by human. According to the reading of Denardis, Computer worm is autonomous code that can self-propagating and self-replicating which seeks holes in application, protocol and operating system to modifying computer files and even launching coordinated attacks by flooding the system with numberless of requests (Denardis, 2014). From the 2018 State of Cyber Resilience study, the focused attacks have rapidly increased from 70% in 2017 to 87% in 2018 (Pash, 2018). As a result, protecting individuals from cyber-attack should be the very first things that the internet providers, companies and government should do, thus certain degree of interruption from the government or companies should be allowed to block malicious websites.

Thirdly, filtering inappropriate content and preventing individuals receive illegal content is one of the prime missions of social media companies and The Australian Broadcasting Authority (ABA). Under the rule of Broadcasting Services Act in 1992, ABA was given authority to monitor the internet industry and offer information about internet safety as well as investigating suspected internet content, such as material that related to crime, violence or drug (BSA, nd). It is no doubt that individuals have their privilege to express their opinions; however comments or messages that violated other individuals should be prohibited and banned by the social company. To keep the children safely away from the criminals and prevent individual’s privacy from being exploited illegally, net neutrality should not be established. It can also stop social media becoming a platform for individual placing hate speech. For example, according to the reading of MacKinnon, on Facebook, it abolished groups that expressed aggressive opinions or organized campaigns against Jewish people (MacKinnon, 2012). In addition, Facebook has developed a new system that combined automated software which can identify image patterns, keywords, and communication patterns that usually relate to abusive speech (MacKinnon, 2012). Every review written by the Facebook users will be read by the Facebook staff directly to examine either the content is appropriate. As a result, the monitoring of the social media companies is inevitable for the cyber safety. 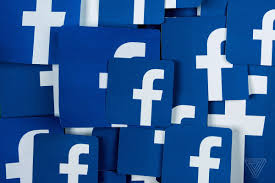 How to stop Facebook from looking for you with face recognition. The Verge. All right reserved.

According to the reading of Denardis, seventeenth-century British philosopher Thomas Hobbes proposed an idea of “state of nature” which stated that partial individuals are urged for complete freedom where individuals can do whatever they want without consequence (Denardis, 2014). However, Facebook has rescued it’s users from this idea of “state of nature” as this freedom only suits for the most aggressive and strongest individuals and is opposed by the majority of individuals seeking to capitalize on their self interest. Most of the rational individuals believe that voluntarily sacrificing certain amount of freedom in exchange of a sovereign or government would be the best way to maximize their self interest, thus establishing and enforcing policy and rule can contain and serve all the interest of the social members. From the reading of Denardis, Hobbies stated that only a concentrated power of a strong authoritarian government can provide a better service for a greater good (Denardis, 2014).

Moreover, government plays the role of carrying out particular responsibilities, such as fulfilling public’s demand and act according to the public’s interest, thus public can put trust and faith on the government (Denardis, 2014). As spreading discontented messages over the nation could give rise to a large scale of unrest and riot, thus blocking this type of damaging messages is inevitable for the sake of the function of the whole society as rumor could be a powerful weapon created by terrorist to divide the unity of a society. As a result, indeed, the public is not able to access into certain website; however, the government can regulate the society safely and steadily.

In America, the government has set up “protect Ip Act” to combat the illegal online trafficking of copyright media and counterfeit goods (Denardis, 2014). The legislative aims for hunting down antipiracy and has been received the support from the House and Senate. With the establishment from the proposed law, the punishment for intellectual property rights violations was enforced, such as illegally selling and streaming pirated movies. To resolve the violation of intellectual property right, the bill offers the law enforcement and intellectual property right holders the privilege to put to an end. For instance, the victims can require the search engines cease giving links to the infringing web site and demand the internet providers to block access to these sites and exact financial services companies and advertising films to cease any directing transaction payments or serving advertisements to those websites.  All in all, trust should be given to the Australian government as the job of governing cyber world has been successfully implemented in America. This example has clearly reveal the importance of governance by the government and social media companies and internet providers as they can preclude individuals receiving discomfort information, such as pirated movies, indecent material, controversial speech and indecent attack against the government.

In conclusion, net neutrality should not be applied in Australia context considering the trend of volumetric pricing and the needs of safeguarding the internet world, individuals and the society. From the lessons drawn from others mistakes, Australians should learn from the case of America as it has abolished the net neutrality in 2018 owing to the advantages outweigh the disadvantages. It is crystal clear that certain degree of interruption by the government, services providers and social media companies are inevitable, thus Australia should not apply net neutrality for the sake of the future development of internet world.

Mclaren, G. (2015). What the US can learn from Australia on net neutrality. The Australian.