With the rapid development of the technologies, there are more and more internet innovations were created by brilliant human beings. The innovation will be discussed in the following essay is search engine, which is an invention commonly known and used by most people around the world and largely impacted their life styles. Google dominant the search engines in the internet field, advertising agencies always benefits from them. There are also many transformative effects and also defects in different aspects and fields.

Search engines can be refined as an information retrieval system searching using key words of distributed digital text. It indexes webpages as a system, and the system including multimedia and other contents found on restricted enterprise intranets and personal computers (Halavais, 2013).

In short, it is a program searches the web for sites based on the keyword search terms by users, and returns the relevant results pages connecting with searched keywords. The most famous sites today on the web are Google, Yahooand Microsoft, for searching through a mass quantities of data across the internet.

The search engine is a fancy solution for the current new information environment.

It is undoubtful that Google dominate search in much of the world.

According to the latest netmarketshare report(January 2018) above. 74.52% of searches were powered by Google and significantly more than others.

Google is full-featured, it is offering everything from news searches, image searches, map searches and many other searches. With impressive keyword relevancy and a continuously improving search algorithm.

The limited span of attention is the decisive factor of the structure of the web, also the demand for search engines. Most people attempt to use less time but more effect to fulfill their Information search to some satisfactory level. As for the real change on the web, the ways people engage in particular content which is the technologies of attention. While individuals begin to realize the significant of attention, there is a new perspective on the way media is consumed. It becomes a valuable commodity instead of a target of miscellaneous persuasive messages. In the circumstance of the attention economy, while the search engines are aggregators of wealth via advertising, the clearest source of revenue are the advertisers (Halavais, 2013). Therefore, the advertisers benefit from its transformative effects in such environment. And Google which domain this field is an ad company itself.

It seems free for searching in our daily life, but the costs of using are the data users enter into their database actively or passively. These inputs have become consumer traffic and demographic information and then sold to marketers and advertisers. The stuff use algorithms expropriating resources form the subjective experiences.

When the physical and intellectual energies possession of a worker transferring to the capitalist, value will be generated in capitalism. Therefore, in such search contexts, Google shows a sustainable growth based on the economic surplus of the data from uses. This is a virtuous circle that they have sufficient fund for building more server farms and engaging in research and development to recognize new implements or systems to acquiring more user data (Konig & Rasch, 2014).

Not only the Google has benefited from its effects, almost every popular search engine gets profits from advertisements. Take the dominant search engine in China for example, the google was prohibited and the Baidu replaced the position of Google in China. It has almost the same usage with Google. 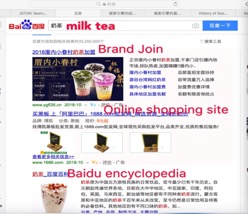 As we can see from the above screenshot, I tried to type the key words ‘milk tea’, and the engine returned results rapidly. The orders of these results are were ranking clearly that the first one is the advertisement of one specific milk tea brand asking for joining and showed further links of their contact details. And the second result which is still an advertisement which is another online shopping site link. The third one is the definition of the keyword milk tea. Search engines like Baidu, they received money from advertisement company to allow their advertisements to be at the very top. And the algorithm inside will calculate and guess my interest, then recommend the most relevant information at top. This mode of work could help them serve more specific advertisements and make more profits. As the top one result in the screenshot, which is exactly my favorite milk tea store, and I will certainly consume after seeing these ads. Both the advertisements and merchants make profits at the same time. In general, the existence of search engines promotes the publicity and bring profits toward a huge amounts of companies especially advertisements.

The various resources and consensus in search engines might influence the opinions of individuals. There was an experiment called The Search Engine Manipulation Effect and it’s Possible Impact on the Outcomes of Elections.It found that 20% preferences of the voters might be influenced by the photos and videos shown before. So they further conducted that certain ages and gender groups were easily influenced by the resource and information given by the search engine. A further political effect that it might impact the political views and opinions of the public due to the various information of favored or non-favored political candidate

According to the most conservative results given by Ji, Choi & Ryu (2016) 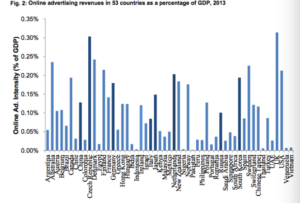 The search engines might not only a reflection of preferences and characteristic in their countries or regions, but also contributed to the innovations and distribution of their indigenous content. They might also have the ability to produce, collect and manipulate information circulating inside their own countries that has been understood as ‘information sovereignty’ (Segev, 2010).

While the public and advertisements get benefits from online innovations like search engines, those traditional companies might be threatening. 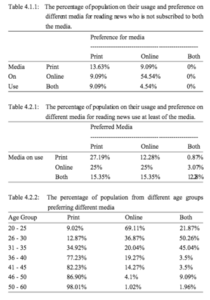 Rajendran & Thesinghraja (2014) showed ‘Percentage of population on their usage and preference on different media for reading news’ in the figures above. It indicates that the preference for newspaper is relatively lower when comparing with modern online media. And older generations relied on traditional media most while the youngers preferred the online materials. According to current trends, those old media will gradually disappear.

The ways of acquiring news is just a small clue that, the online media including the search engine is attracting the younger generation today. The search engine is more convenient to get customized news and resources than to look up redundant news in newspaper or magazines.

Under this circumstance, the traditional media like broadcast, newspaper and television might get no profit with the arise of search engines, but also facing the risk of failure.

While the occurrence of search engines, a minority of people who are vulnerable seems embarrassed sometimes. Search engine such as Google could be viewed as sexist, homophobic or racist. It was interrogated by entering combinations of identity terms or question word. If I type ‘Why are blacks…” in the search box like this for eliciting auto-completed questions (Paul, 2013) 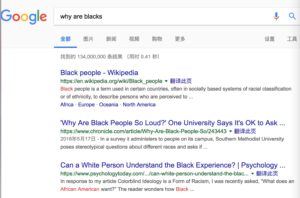 As we can see there are relevant results on the tops are all articles are negatively stereotyping.’ Why do black people so loud?’ shows the discrimination here. Algorithms in search engines always lead to such results that hurt minority group and represent them as stereotypes toward others intentionally or unintentionally. They are absolutely excluded from the benefits in this occasion. And I also supported the idea that Google should establish a facility for flagging negative auto-completion statements like this as problematic and deal with them further.

2) Acquiring knowledge from different fields from all angles.

1) Rely on the search engine leads to the degeneration of operational ability and also the elaborative faculty.

2) Lazy to think and has less productivity than before.

In general, the principle of search engine is derived from the principles of search engines is the using of computing systems in libraries. Beginning from precedent of the search engine- Archie, then constantly improving and form the sophisticated search engines we use today. Google dominates the whole filed in the past decades, and billions of relevant advertisement companies and merchants were sustained to make profits during the whole process. Search engines provide platforms for propagandizing and attracting users and clients. With the advent of search engines, there were supervening political, economic and also cultural influences existed. However, the search engines also threatened the traditional media format invisibly, and unfair to minority group.

As for myself, a student, a typical example of young generation relying on the internet. Search engine provides an easier mode for me to get more information and knowledge in various fields, not only academic but also entertainment. It saves time for me to get results without actual practice. I have to admit that the overusing in electronic devices and search engines makes me lazy. Overall, I appreciate the existence of search engines anyway.

Paul Baker, A. P. (2013). ‘Why Do White People Have Thin Lips?’ Google and the Perpetuation of Stereotypes via Auto-Complete Search Forms. Critical Discourse Studies, 10(2).

Robert E & Ronald E. R. (2014).The search engine manipulation effect (SEME) and its possible impact on the outcomes of elections. Retrieved from

Segev, E. (2010). Google and the digital divide: The bias of online knowledge: Elsevier

Net Neutrality:Equal Rights and Equal Internet for Aussie or the Dead End?

Why should we care about search engine?