Biometric technologies have been developed as regulatory extensions of government authority in the present networked age. A discussion of their inception, logic and implementation produces questions for these arguably contentious methods of surveillance placed over a citizen body, and to what extent the public’s access to privacy is compromised in favour of government efficiency. This essay will examine the functions of national biometrics schemes, using the example of India’s Unique Identification Scheme, Aadhar, to discuss some of the political and economic effects these might produce in an Australian context.

A common process of biometric technologies involves an aggregation of the similarities and differences between the subjects in question (Syryamkim et al., p.1, 2018). Biometric technologies harvest and archive the individual’s biodata as a reference point for their person, allowing them to be easily discerned within a given database. Where biometrics first applied to computer access in 1999, the four chief factors beneficial to their development were reductions in cost and size; as well as an increase in accuracy and ease of use. They have since been recognised as a means to secure digital networks in everyday life, with an increased user authorisation capacity that has largely usurped traditional security methods like passwords (Nanavati, et al., p.15, 2004).

This short video was  produced by Bloomberg in 2014, in advance of the Money 20/20 Conference, held in Las Vegas. The conference was anticipated to have been a hotbed for discourse in biometrics and plans for its institution in the near future (Bloomberg, 2014). Concurrent were governmental moves to innovate with biometric identification. The productivity of nationwide plans became concerned with how populations could be more efficiently organised with biometrics, and how this could herald .

The Aadhar Card system – implemented in India – has seen these regulatory methods brought to governance. According to Danny Thakkar, co-founder of the international biometric software providers ‘Bayometric,’ India’s Aadhar program is amongst the most ambitious in the world (Thakkar, 2016). The card physically resembles a government issued photo ID 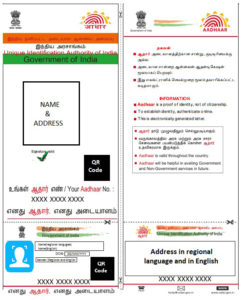 Launched in 2009, it has seen a number of physical iterations; the card has now garnered a QR code which corresponds with a prescribed twelve-digit number, as seen in the example provided by Wikimedia Commons user “Sulthan90” (2017). Each citizen of India receives a unique sequence, which functions as an individual identifier in their government database. Bodily collection includes — but is not limited to — photographs, and iris scans (Dixon, pp.544, 2017). The biodata is then matched with the reference number, along with details of the person’s demography, gender, age, and place of residence, to create the digital profile. The Aadhar card was conceived, initially, as a voluntary scheme to engage with by the Unique Identification Authority of India [UIDAI] in late 2009 (Gerdeman, 2012). The government organisation began issuing the numbers to improve the quality of the domestic Public Distribution Systems [PDS]. This was largely due to beneficiaries taking advantage of government subsidised goods schemes; food rations being just one of these (Sukhumar, 2013). With the Aadhar number, a citizen was accurately verifiable, guaranteeing a greater degree of security to the government as they actioned their public services under the regulation of this breakthrough development. In years subsequent to its launch, the UIDAI would introduce policies to greatly encourage the linking of bank accounts with Aadhar numbers (Gerdeman, 2012), as well as mobile phone devices.

The embedded video contains a homemade walk-through on how the user can link the card to their phone; a seemingly widespread practice given the video has accrued 469,000 views (Chhabra, 2018). The scale of the project expanded in ways that we are still witnessing unfold today.

As the scheme began to encompass the Indian citizens’ domestic life, there grew concerns with how information was being retained and whom had access to Aadhar’s data. The Aadhar Act of 2016 (Ministry of Law and Justice, 2016) – a digitally-published copy of which is attached –  saw the system attain functional expansion. It became necessary to be registered to book rail tickets, receive school scholarships, file taxes, and gain access to select private religious temples (Dixon, pp.547, 2017). As such, The Act’s policy is of much concern to critics who claim that an assurance of user privacy is lacking. Today the government has wide access to the Aadhar database for law enforcement purposes. Their discretion of usage has consequently been questioned, onsetting much confusion around who the system is more beneficial to: the citizen or the state. The US’ alternative to India’s nationwide biometric plan achieved more complexity and segmentation than the Aadhar system. According to Dixon, their sectoral approach, unlike India’s holistic method, sees respective state governments organise their own archives of biodata. Due to this segmented method, there is a high degree of inconsistency between federal and state laws concerning how the data is secured (pp.551-552, 2017). The two nations parallel over their contentions through these schemes which continue to problematise a public sense of security. While the US’ case speaks to the globalising determination of biometrics’ viability, it dually comments on a lack of uniformity in how nations approach these regulatory practices.

Biometrifying a population positions nuanced questions around the political and economic agendas of nation states. The politically static landscape of the West, defined by parameters of ethno-nationalism in a post-9/11 world, presents a problematic testing ground for technologies of biopower. The normalisation of these ethnically-defined borders to the Australian state, according to Dean Wilson, are at risk when assessing the ongoing use of biometric technologies in the processing of asylum seekers (p.208, 2007).

The social and cultural implications behind these technologies are, by this consideration, problematic when considering the divisive policies of post-colonial Australia that are instituted by political bodies like the One Nation Party. An article from late 2017 was published by the Guardian telling readers that former One Nation senator, Brian Burston, had sent brochures to a number of primary schools around New South Wales inciting division between the non-Islamic and Islamic students (Knaus, 2017). This is not the first of Burston’s attempts to advocate for a racially-motivated ousting of Islamic people from both the Australian Parliament, and wider community. 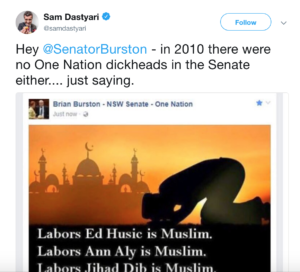 Such is evidenced by another image (Burston, cited by Dastyari, 2017) he distributed via his Twitter account, implicating his party’s political opponents to be aligning with Islam – an ostensible political-religious unification. The case for One Nation’s white Australia beliefs represent just one example of conservative ethno-nationalism that occupies this country’s political environment. Their condemnation, as evidenced by Burston’s gestures, demonstrate a real and pressing danger for Islamic people, both entering and living, in Australia. This we can extend to all non-white immigrants subject to overbearing conservative national policy, compounded with uses of 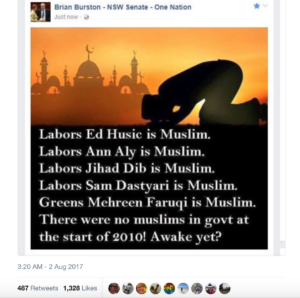 Returning to Dean Wilson’s writings, we gather his comment on the performative nature of biometric identification (pp.210, 2007) to host a significant intersection with the aforementioned ethno-nationalist problematics. Wilson frames the use of biometrics — in the context of border policing — as a performance of colonial sovereignty. These practices of sovereign control garner a certain cultural capital that pedestals the nation state as “the ultimate arbiter of security (Wilson, pp.210, 2007)”, which oversees a conflation of the immigrant person with notions of infection that risk cultural sustenance (pp.210, 2007). With this accounted for, the question of how projects at the scale of Aadhar would configure in an Australian context become densely complex. The isolation and categorical othering of the non-Australian that are intrinsic to our current use of biometrics are then at risk of amplification, should the technology proliferate and occupy the practices of everyday life. In the case of Aadhar, Elida K.U. Jacobsen argues that biometrics have supplied a significantly compromised, postcolonial state with a means to better calculate the socio-economic landscapes comprising their nation. In doing this, the government is better-equipped to approach flattening the landscape; evening out discrepancies in class and economic status (Jacobsen, pp.460, 2012). While in theory this could produce a utopian outcome, Wilson’s arguments shadow this optimism for a holistic success in Australia. “Biometric deployment is intertwined with the securitisation of migration and the criminalisation of persons seeking refuge in Australia (Wilson, pp.211, 2007)”.

Wilson’s cautionary writing tells us that biometrics represent an imperial project in to the invasion of immigrant persons, employing violations of their privacy and identity to secure the conservative parameters of the Australian postcolonial nation state. Expanding this argument against their invasive tendencies is Dixon’s negotiation of consent, which further nuances their breaches of privacy. Dina Gerdeman (2012) quoted Harvard Business School Professor, Tarun Khanna, saying, “you are basically denied almost everything if you can’t prove who you are,” referring to the state’s growing demand for Aadhar verification (Khanna, cited in Gerdeman, 2012). This indicates the permeation of the state’s capacities for surveillance. Dixon extends this to the rights of women and other citizens being rescued from adverse conditions in the country’s sex industry. The anonymity of these people is no longer conserved, as all rehabilitative services are essentially serviceable to Aadhar card holders exclusively (Dixon, pp.558, 2017). The linked article reports on a woman who, under a false pseudonym, attained an Aadhar card illegally as a citizen of Afghanistan. She was arrested for prostitution and has since been reprimanded for the crime, with her details being entirely accessible to the Indian government (Indiatimes, 2017). While the article does not detail her reasons for acquiring the card, we are still able to identify how such an instance of exposure poses significant threats to the individual who can no longer negotiate anonymity. The use of a highly-detailed and central archive like Aadhar, available to government bodies and external stakeholders, continue to produce risks for people in less normative living or working circumstances (Dixon, pp.211, 2017). As such, this eradicates a legislative priority for consent and the user’s entitlement to privacy.

The impacts of biometric technologies are unfolding concurrently with the technology’s development. Raised through this essay were the concerns around the Aadhar project, and similarly-functioning national identification schemes that dually include and exclude bodies within a given population. The hubris of such projects have maximised the government’s monitoring capacities, but have proceeded in contributing to structural violence that threatens already marginalised citizens of the world.

Indiatimes. (2017). Afghan Sex Worker With Aadhaar Card Nabbed In Gurugram, Cops Clueless How Did She Get It. Indiatimes. Accessed: https://www.indiatimes.com/news/india/afghan-sex-worker-with-aadhaar-card-nabbed-in-gurugram-cops-clueless-how-did-she-get-it-335981.html?google_editors_picks=true

About Thomas Husband 2 Articles
Undergrad at USYD doing Media and Communications, with a major in Digital Cultures. Arts and culture editor at FBI Radio. Professional no-one.