While there is no universal biometric system currently in action within Australian society, these biometric technologies are utilised on the border when entering and leaving the country. After considering the various implications of systems such as Aadhaar in India and the global trend towards biometric identification, the implementation of a biometric system seems inevitable in Australia.

Reflecting on such a system, it is concluded that the Indian Biometric case provides a useful example of what to be wary of if implementing a Biometric Identification system, and also what benefits the system can produce. There are key issues of privacy and security that need to be overcome before a system like this can or will be implemented in Australia.

Biometrics in the increasingly digital world:

The use of biometric identification is inescapable, this technology verifies and recognises an individual’s identity through physiological, behavioural or anatomical patterns. It is used to screen airplane passengers, identify terrorists and combat welfare fraud (Nelson, 2011).

The tragic events of September 11, 2001 were a huge turning point in terms of surveillance globally, with airports implementing stricter security systems and entrenching the use of biometric technologies (Jones, 207, 2007), this coincides with the increasing prevalence and pervasiveness of the internet and digital technologies in all facets of life.  It must be noted that other biometric technologies were in place before 9/11, such as for ATMs, in prisons, and universities (Connor, 2002).

Governing through biometric technologies is extensive, pervasive and for some time now has been a feature of governments in places like South Africa, Hong Kong and Macao. Due to new advances in digital biometrics, and constantly growing populations, governments are more than ever starting to implement programs across South Asia, South America and Africa (Thomas, 171, 2014).

Below is a discussion of one of these systems that has already been (almost) universally enacted.

The Biometric Identification system; Aadhaar (Unique identification) in India is the largest biometric project in the world (Unar, 2673, 2014). Around 1.1 billion Indians now have a biometric-based 12-digit personal identification number (BBC.com). The Indian Government states that the program will provide them with a better view of India’s population, hence facilitating services, whilst attaining better returns on social investments and an enhanced awareness of monetary flows throughout the country (Jacobsen, 2012).

“Standardised and globalised biometric technologies carry a modern-scientific understanding of the world, according to which society, as a digitalised network, can be managed through abstracted observation” (Jacobsen, 459, 2012). 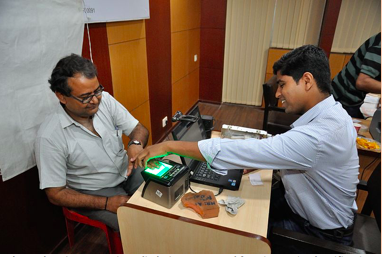 Al Jazeera breaks down the Aadhaar system in this video presenting some of the key figures in the debate:

Recently the legality of the biometric identity scheme Aadhaar was questioned, this issue was challenged in the Indian court. Last week Aadhaar was deemed legal, and the scheme was approved.

A major problem with Aadhaar is the lack of identification of a significant proportion of the Indian population. In India, there are 27 million children born each year, with 8 million of them going unregistered, denying them the safeguard against things such as early marriage and child labour. Identification is also required to participate in a number of government schemes such as the National Health Insurance Program (RSBY) for people below the poverty line (Thomas, 172, 2014).

These people under the poverty line also face exclusion from the Public Distribution System (PDS) that provides food subsidies (Thomas, 172, 2014). India also hosts a huge nomadic community, over 90 million, who are excluded from these programs and others, as they are not part of the biometric identification system.

“There is such a large population in India that anomalies and the resulting exclusion from the system is hugely important.”

There is such a large population in India that anomalies and the resulting exclusion from the system is hugely important. So, even if this system does provide benefits to the community a lot of people are missing out. 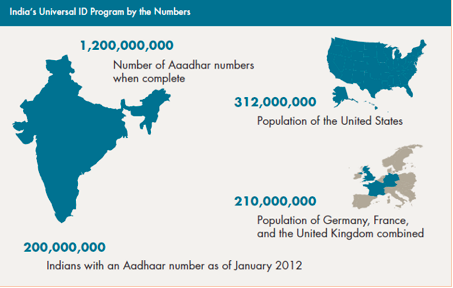 Ramanathan an influential Indian academic(featured in the Al Jazeera video – above) echoes sentiment held by a large percentage of the Indian population, she writes extensively and critically about biometric identification (specifically Aadhaar). She makes the case that there is absolutely no foreseeable benefit of the B.I. system for the poor in India. Though, it may benefit the wealthy. She notes that the claims made by the creators and proponents of the program are not playing out in reality. It is not clear how much the establishment actually knows about the technology, and the entire situation is basically a big experiment. This is clear from quotes from government officials and the utter lack of transparency in the system (Ramanathan, 2015).

This is Nandan Nikeni one of the key developers of the Aadhaar system speaking on this system at a World Bank talk in 2013.

IT must be noted that biometric technologies are already utilised in Australia. Biometric technologies and identification is already in place on the Australian border. Australia follows global surveillance trends creating larger databases of searchable data and more information on populations of the world (Jones, 2007). 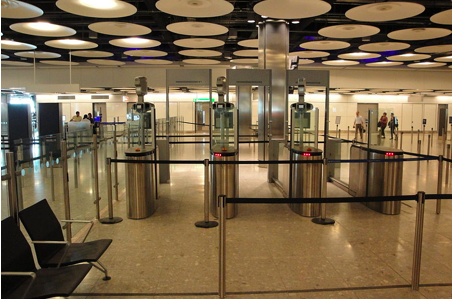 14.2 million Australians have a Biometric Passport (Jones, 2007). This means the government has 57% of Australians facial biometric data, though this information is used in conjunction with a biometric document, the passport. Australians are then using the same name to access other government services such as health services and driving licenses (RTA). While these systems are not linked and it is not a biometric scheme as such, the potential is there.

Should Australia implement a system similar to Aadhaar?

Arguments for the implementation of a system similar to Aadhaar in Australia (Adhere to Aadhaar)?

Unar (2673, 2014) states that reliable identification is a particularly critical necessity in a range of systems and scenarios. Traditional technologies such as cryptographic methods are not reliable or practical because they require people to possess or know something (Unar, 2014). This is basically an argument for efficiency, and also follows arguments that biometric technologies could be useful in preventing fraud.

Australia does not have quite the same problem with a lack of identification that was recognised as a hindrance (Thomas, 2014) to the biometric identification system in India. The population in Australia is not growing as rapidly as India, and the ideas of the exclusion of a large segment of society seem less valid in the Australian context. Anomalies still matter but they would affect a much smaller proportion of the population.

Australia, is a much smaller country than India and has the technological capacity to roll out a system similar to India with biometric identification. However the political and social system/situation in Australia is much different to India, and public resistance seems to be stronger. Other forms of data collection such as “Digital identity “a digital identity program which will allow users of government services to get more done online at a time and place they choose.” (Australian Government, 2018), will soon be rolled out in Australia. Systems like this if unified under a biometric identification framework could run more efficientialy, and help to consolidate data under a registered identity that exists without the need for documents or other time-consuming steps of identification.

Many systems of services and governance are becoming increasingly digitised and also unified. Is biometric identification the future? Is resistance futile?

Questions arise surrounding the technical issues of the cloud and storms gather when we analyse the issue of data storage. Ashbourn (2014) in his book “Biometrics in the New World” asks: “How would this database be administered, updated, secured and kept current, and by whom?”, he takes note of the huge security implications within a system such as biometric identification, where all of the members of societies data is stored (Ashbourn, 42, 2014).

“How would this database be administered, updated, secured and kept current, and by whom?” (Ashbourn, 42, 2014)

For example, as Australia moves towards a unified health database called “My Health”, the previous system of online health records led to the leak of  10% of Australians private health records.  This shows for one; that databases are not secure, no matter how many safeguards are in place or who controls the data. And secondly, that a system such as my health which involves the option to opt out; people will, as 1 million Australians have already. If a biometric identification system similar to Aadhaar was implemented in Australia we could assume a large chunk of Australians would opt out. If it was compulsory questions of privacy come to the forefront, and how can we know this information will be safe.

Furthermore, India’s Aadhaar system has been hacked. Cybersecurity of the Aadhaar system is clearly weak, and Australia may be able to create a less vulnerable system (?). Hacking aside Ashbourn (2014) notes that there will be a temptation for governments to share or use biometric databases as references and also share this data by… accident.

“It is a fact that, wherever the infrastructure resides, it will consist of servers, storage, and other hardware and software that will need to be administered and maintained. A number of individuals will consequently have privileged or ‘root’ access to these components” (Ashbourn, 39, 2014).

Australia follows privacy laws similar to the US. The encryption dispute between Apple vs FBI, provides an example where a corporation (apple) did not have to provide details (of individuals) to the FBI (government organisation) of encrypted data, whereas in India; Blackberry was forced by the state to allow them access or be banned (Arun, 461, 2018). However, this exemplifies the danger of state surveillance within biometric identification, and the contrasting contexts of privacy that translate into legalities in different countries across the world.

To the future and likely scenarios:

The  Australian Government is in a very strong position to enact biometric identification as a standard in Australia. Though issues of individual freedom and privacy in Australia are offering the most resistance to a universal program similar to Aadhaar being rolled out. It is true that Australia would have much less problems in terms of providing everyone with access to the system.

While the Indian court has confirmed the legality of the Biometric Identification system; “Australia’s biometric identification project has been terminated”.

The conglomeration of all of the services already in place or to be enacted in Australia are close to the scope of the Indian Biometric identification system. However, in Australia it is not a universal system, fingerprints are only added to a database if you are implicated in crime, and facial recognition is utilised if you leave/return to the country through passport data. This data is not (supposed) to be shared between government agencies and currently is not used to access services within Australia. But…

Is biometric identification as a universal system inevitable in Australia and across the world?

Ramanathan (2015) Considering Social Implications of Biometric Registration: A Database Intended for Every Citizen in India [Commentary],” in IEEE Technology and Society Magazine, 34, 1, pp. 10-16

Fisher, A. Carrick, D. (2018) Can airport authorities search your phone or computer?

Your entertainment your choice: Netflix

More and more customers around the world are cutting their cable company every year. The streaming options provided by Netflix offering a wide variety of digital content has no match. Netflix has harnessed the transformational […]

Prior to the year of 2010, Valencia was a mere Spanish city and Facebook photo albums were at their prime. When Kevin Systrom uploaded a photo of his dog captioned ‘test’, to the then-inactive platform, […]

Search Engines: To Grow Organically or Not?

Whether you were viewing a fashion blog, technology support forum or online store; there is almost one thing that was certain. You entered the page using a search engine. Seen as the oracles of the […]