Introduction
With the emergence of the Internet along with the World Wide Web in the Information Age, there have been many communication opportunities worldwide (Roberts, 2018). On this background, this paper seeks to review the issues considered to be at the core of net neutrality and evaluate their significance in relation to Australia. In particular, this paper will discuss the issue of net neutrality as an online regulatory concept based on its historical basis and whether Australia should or should not adopt it. This paper concludes that the vibrant combination of a strong completion in Internet access provision in Australia, extensive implementation of volumetric pricing by a majority of Internet Service Providers (ISP) along with the availability of a well-established regulatory framework to deal with Internet-related discriminatory behaviours counteract the need of net neutrality in Australia.

Historical Background of Net Neutrality
Net neutrality is a principle put forward for user access to the Internet by preventing ISPs from discriminating between the various types of Internet traffic or limiting content, sites or even platforms that users can access.In fact, the Internet can be said to be inherently neutral as it was basically designed as a neutral medium. Nonetheless, this medium has been, in the past, controlled by only a few major companies.The consistent drive by the major internet infrastructure providers as well as telecommunications companies to regulate consumer data has brought about the issue of net neutrality.

While net neutrality is anticipated to benefit both consumers and network owners in Australia as it provides equality to these parties, opponents of this concept still think that net neutrality is a uniquely American issue initiated by an abandonment of access control as well as a lack of competition in the retail provision of Internet access.

Net Neutrality in United States
The notion of net neutrality has been a prevalent debate in the United States, especially concerning telecommunications policy. On the basis of the principle that internet access ought to be transformed or constrained by ISPs that an individual decides to use, it seems that people still consider the internet to still have the potential of drastically transforming their interactions as well as information people choose to access on the Internet (Newman, 2008). However, for ISPs to sustain a competitive market as regards internet provision, they ought to be permitted to distinguish their internet service provisions. Since January 2014, the Federal Communications Commission (FCC) was stopped from enforcing neutrality rules in the United States to big companies. It meant that telecommunications providers could from then start providing two distinct lines of internet services. 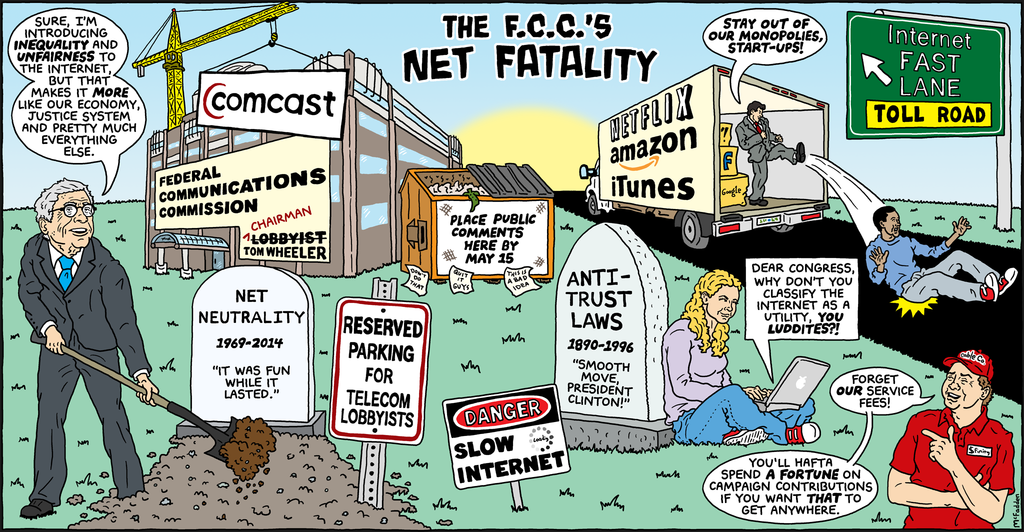 Comics of Six ways you can protest the FCC’s attempt to kill net neutrality,Leftward Thinking, All rights reserved

Net Neutrality in Australia
In Australia, the net neutrality concept is only just emerging as a critical issue of public discourse. Thus far, there has never been a proper plan or distinct regulation to initiate the net neutrality rule in Australia. This paper contends that there could be a good reason for the lack of attention to net neutrality in Australia. Some of the reasons could be because of the strong competition in the provision of broadband Internet access (Marsden, 2010), extensive adoption of volumetric pricing by the Internet Service Providers along with the well-rooted regulatory framework needed to deal with discriminatory behaviours that could be damaging to consumers as well as competition.

Arguments for the Introduction of Net Neutrality in Australia

While the issue of net neutrality began in the US, it has today become a crucial issue in telecommunications regulation. Since 2002 when net neutrality was triggered by the FCC in the United States, the issue has gained momentum worldwide. As such, it is feared that biggest ISP companies are capable of discriminating web traffic as per who pays more. It might also mean that those companies that pay more are likely to have faster data transfer as compared with those others who cannot afford to pay the desired charges, hence they will only experience slow data speeds. Such aspects are regarded as unethical as the ISPs tend to be in control or can limit Internet freedom and even block or slow down data to particular websites (Daly, 2014).

More Recently, Iñaki Berroeta,the CEO of one of the largest mobile provider Vodafone, has stating that “I would love to be able to charge some users more to access content,” although this is exactly what Vodafone has been doing in some markets now. If people need pay extra money for access their social media platforms or streaming videos, the net neutrality preserving is now even more important.In addition, without net neutrality, the government can take advantage of and exploit users by limiting information that can be shared with the public through the Internet. They can achieve this by slowing down or blocking data speeds to specific websites.

Meanwhile, the proponents of net neutrality have alleged that ISPs along with other network operators have incentives that discriminate against competing content as well as services to the detriment of competition in the market (Marsden, 2010).As net neutrality supports the notion of internet providers treating all internet content the same, it is noticeable that this concept prohibits discrimination on the basis of content, platform or user as ISPs are just common carriers that provide these services exclusive of any discrimination to the general public. 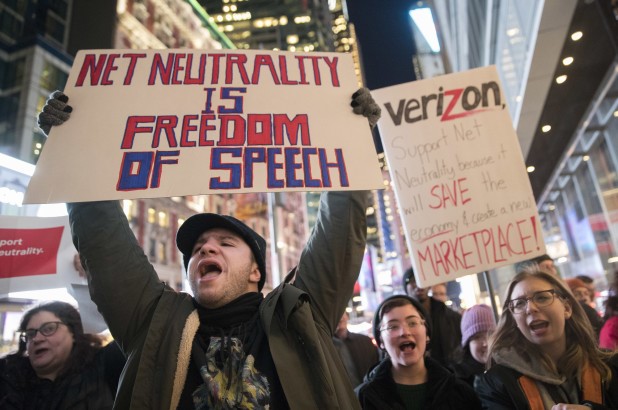 Mobile providers like Optus also has impose restrictions on streaming services, usually with the plans that related to Netflix, Stan and all the rest. In this case, streaming services are restrict down to 1.5 Mbps(Andrew,2018), with SD picture quality provide only.Some of the unlimited mobile plan that can be seen in the market also slow down the speed artificially. This is obviously is an unjust behaviour.

In addition, net neutrality assures maintenance of an open internet. It permits its users to access a wide range of information or content without any interface from third parties. It means that without net neutrality, it would be possible for internet providers as well as the government to interfere with the Internet (Denardis, 2014). As well, without net neutrality, some ISPs would charge extra fees for users to have access to the few content that companies capable of affording could pay for to achieve preferential treatment. As such, an ISP will be capable of slowing down its competitors’ content or sites or block opinions that it disregards or considers inappropriate, which would be unfair. This is possible to further relegate other users to a slower tier of service, which could destroy the open Internet.

Proponents of net neutrality maintain that it is needful to keep Internet a level playing field for all. Therefore, it is clear that net neutrality supports an open internet, which protects users’ right to communicate online freely without interference from Internet service providers and prevents discrimination against access of any content or applications online.

Arguments against the Introduction of Net Neutrality in Australia
The net neutrality in Australia has not been adopt yet. Net neutrality means that government regulates the internet like a public utility. This is also means that bureaucrats making key decisions about how the internet is run. Take electronic providers for example, if they use more than other they pay more for the privilege. This is a fair way for internet as well. 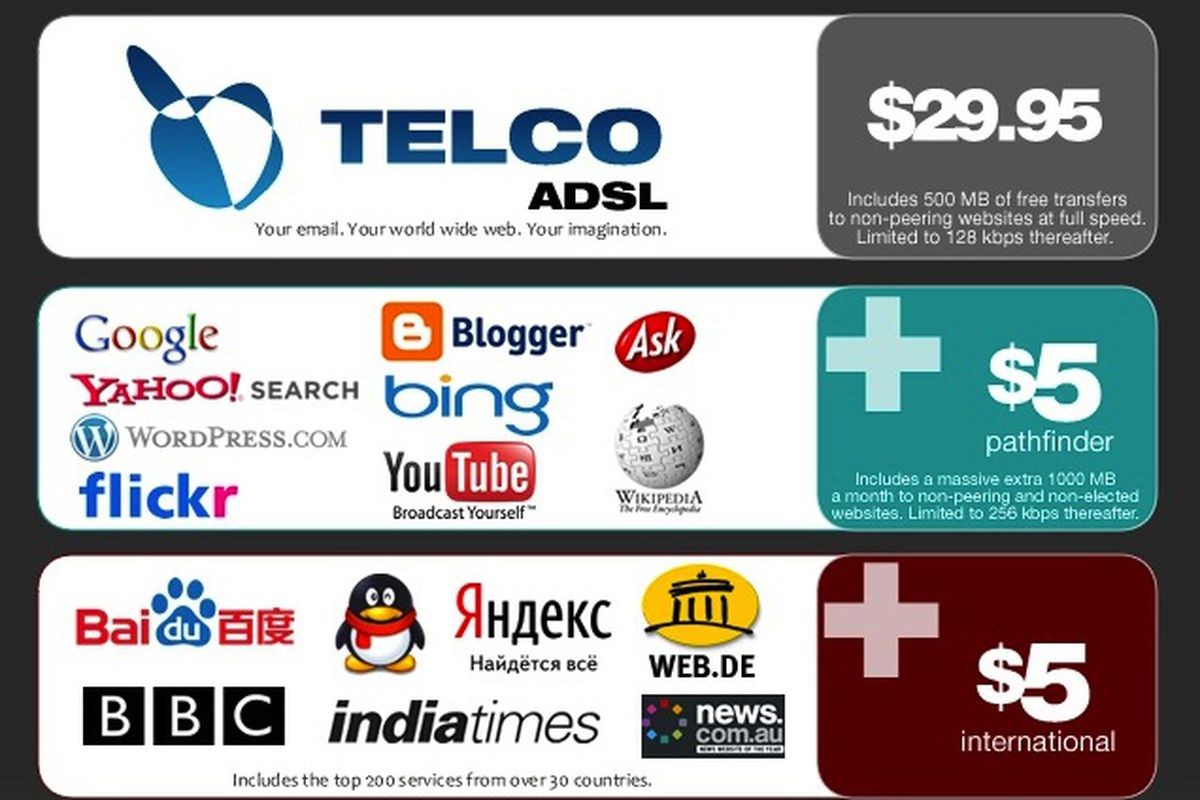 Market without net neutrality will get boost by provider’s competition. This has also enabled ISPs to manipulate and priorities pertinent data according to what is considered relevant to appear on the searches. People could pay services bundle to use the online platforms only for their need,also stop the website contains unsafe, improper content, build a better internet environment. Without net neutrality, website will be more regulated. For those kids who addicted to specific platforms, Apps, Games, restrict the assess to those website is a good way help with their addiction.

In addition, permanent restrictions will guaranteed quality for those who already being used for these services while net neutrality has no way to preventing that. Less competition means less pressure to improve product and services. Charging for Internet use is likely to increase the competition at the market. If there was less regulation and provider is able to charge a premium for faster service, providers could re-invest the money in better infrastructure. This could include improved access for people in remote and rural areas.Some internet content providers like Facebook and Netflix, even though their content takes big package of data than others like email, service provider cannot charge them extra for getting all that date to phones and computers. Abandoned net neutrality will close the mobile network to be overloaded.

As well, Australia still follows a similar path to European countries as regards the liberalisation of telecoms markets (Denardis, 2014). World over, the issue of Internet freedom has become widespread, with the bigger question being how democracy and human rights can be achievable online for consumers in terms of Internet access (Mcdiarmid & Shears, 2015).

Conclusion
In summary, it is notable that net neutrality leads to a strong competition in the provision of Internet access, ensures a widespread adoption of volumetric pricing strategy by ISPs and the existence of a significant regulatory framework in Australia. On the one hand, supporters of net neutrality consider that a failure to authorise some aspects of net neutrality might mean that the Internet does not become free or open for users, which might impact on political, economic and cultural aspects of society. In essence, an absence of net neutrality might impede innovation. On the other hand, opponents of net neutrality have argued that imposing regulations might reduce the ability of ISPs to manage their respective networks while developing their product offerings that might undermine their abilities of defraying the high investment costs involved in upgrading consumer networks. At the same time, the different point of view feel that control of the Internet might further help the service provider for better infrastructure. Abandon net neutrality also will prevent the overload issues currently. The restriction of access is helping internet environment with better regulation. In Australia, as the debate on the issue of net neutrality becomes extensive, there is a need to weigh these advantages and disadvantages of net neutrality.

Andrew H(2018). What is Net Neutrality and How Does it Impact Australians in 2018. Available at: https://www.comparetv.com.au/review/net-neutrality-explained-australia/ [Accessed 12 Oct.2018]

Me.Me. (2017). In Australia we don’t need to worry about net neutrality our internet couldn’t possiblely get any slower.[image] Available at: https://me.me/i/in-australia-we-dont-need-to-worry-about-net-neutrality-19789704 [Accessed 12 Oct.2018]

Introduction- What And Why Is Facebook Facebook is an American online social media business that is based in California. It is launched in 2004 and it currently has 2.2 billion monthly active users in 2018. […]

Net Neutrality: What is it, and should we have it in Australia?