In 2009, an online regulatory concept named Aadhaar issued in Indian, supported by the technology of biometric identification. In this essay, it will firstly base on a news about the implement of Aadhaar in India and explains the influences that bring to the India society. Secondly, it will move on critically evaluating this online regulatory concept and gives some evidence to prove that why it should not be applied in the Australian contextual environment. Finally, the conclusion emphasis the important elements that need to be mentioned during the process of implementing a biometric technology.

Aadhaar, the world’s largest and the most enormous biometric identity database project was approved by India’s Supreme Court, reported by South Asia correspondent Siobhan Heanue from ABC News (Heanue, 2018). In 2009, the prime minister of India, Narendra Modi, announced that he would realize India as a “Digital India” by establishing an ambitious biometric database program, named Aadhaar, for al Indian citizens. Aadhaar, also known as India’s “Unique Identification Number”, it launched a voluntary identity system aim at solving welfare fraud but also facilitate to almost every aspect of people’s daily life. Aadhaar project dispenses a single and unique identification document that registered the identity of all India’s citizens with a 12-digital number in the national system. Indian residences can apply for Aadhaar very easily and conveniently without any charge, just need to submit their existing proof of identity in a nearby specified data acquisition center, such as passport, PAN card, driving license, etc., and proof of personal information, such as phone, power bill, bank statements and individual biometric profiling, such as fingerprints and iris scan (Rouse, 2012). India has a series of identity documents including passports, permanent account numbers (PANs), ration cards and driving license, the appearance of Aadhaar will not replace these identification documents, but these functions of identification documents can be connected to Aadhaar, Indian people can use Aadhaar as other sole identification documents proof when applying for other things. Aadhaar becomes a new full-featured identification proof that serves all purpose.

However, it raises a heated controversy toward the establishing of Aadhaar project, as the Siobhan Heanue report shown, a lawyer named Shyam Divan, who is arguing against the enforcement of the mandatory system, pointed that Aadhaar “alters the relationship between the citizen and the state” (Heanue, 2018). Divan deem that Aadhaar is a database strategy which carried out by the Indian government to collect and track the transactions across the life of all the Indian citizens, Aadhaar will give privilege to the state to profile, assess and track citizen’s life movement and habits then imperceptibly impacts on citizen’s value, guide citizen’s behaviour style. The lawyer, Divan argues that the enforcement of Aadhaar is such like the Indian government are building a digital dictatorship to exert control the Indian citizens, because if a person’s profile in the Aadhaar database system is blocker or revoked, then the person could be immediately deprived of basic services, like his identification, phone number, bank account, driving license, welfare, education and so on. It has been raised a great concern toward the security of the system. Further, according to the news article reported, there are some people criticize that India’s poorest people are suffering by the Aadhaar system, due to in some rural area with relatively poor network conditions and some remote area with scarce of biometric technology and relative technician, citizen’s identity information cannot be collected by the Aadhaar system, leading to them cannot access to the welfare provided by the government. Until today, Indian residents have had to provide their private information to the government database, Aadhaar. Although there are some people are aware of the weakness of the Aadhaar, it is too late for them to change their mind and there are up to hundreds of millions Indian citizens have already signed up their information linked with the government database.

Unlike other countries in the world, India is the first country that registers citizen identification without any material documents, replaced by using the technology of biometric identification. The original purpose of the implement of Aadhaar is mainly designed to more efficiently and simply provide national health welfare bonds and subsidized goods and services to the deserving recipient Indian people without middlemen. The Indian government considered that it can play an important role to cut out the middleman, reduce and eradicate corruption. Meanwhile, the Indian government aim at building a modernized country by moving toward a “cashless society”, because people can link their Aadhaar with their bank account so that performing a financial transaction as a bank card. It can be said that it is the most ambitious and biggest biometric database ever conceived around the world. However, the world’s largest biometric identification system is facing a great challenge in India, the concerns of the invasion of individual privacy, uneasy nature of usage, problems of centralization has been raised a great controversy domestically and internationally. 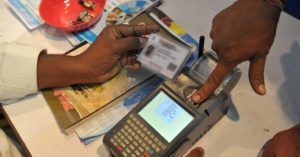 The first and the most serious issue exposed is the invasion of individual privacy. The Aadhaar database is one of the largest government databases on the world, it managing by the Unique Identification Authority of India (UIDAI), supported by the Ministry of Electronics and Information Technology (Gemalto, 2018). According to the latest statistic reported by the minister, there are 1.31 billion of Indian population has been issued Aadhaar until 15 February 2018, this number occupy 89.2 percent of estimated total India population (Sabha, 2018). The original purpose of this system is designed to make the country better in terms of national health welfare, demographic and facilitating people life, however, it is turning into somewhere dangerous, where the government can easily infringe citizen’s right of privacy. Everything from enrolled citizens’ bank accounts, privacy information, iris, fingers pint and so on, all can easily record in this system and when airline and telecom companies and micro-payment systems, and various institutes can ascertain a large number of personal information from Aadhaar. Moreover, according to a report shown, Aadhaar Project is being handled by private companies who won the round of auctions (Bengaluru, 2017). It means that some foreign companies will be given the authority to make use of this data. The more demand to the Aadhaar, the more risk of private security that people suffer. It rises a great concern over the data security and privacy. Therefore, it is not appropriate to imitate Aadhaar in the Australian contextual environment due to it is very dangerous to aggregate a large amount of citizens’ private and confidential data in one singular database system, and there is some evidence proving that Aadhaar has almost no data protection guarantee for citizens (FP Staff, 2018), but it is very a necessary and urgent responsibility for government to protect citizens from the threats of the cyber place.

The Second Debate: The uneasy nature of usage

The Indian government believes that the emergence of Aadhaar will facilitate people’s life, contribute to the citizens’ security and reduce corruption to some degree, Aadhaar sounds like a great regulatory concept, however, the second shortcoming is exposed which is the uneasy nature of usage. India is currently the world’s second most populous country with over 1.2 billion people (Magnier, 2011), where illiteracy and rural lifestyle are still burgeoning around. There are many people found that the implement of Aadhaar contributing a mirage bane rather than a boon to the nation. According to a case provided by Mathew (Mathew, 2018), in India, there is a small remote village in Maharashtra, where far from Mumbai city over a little 200 kilometers, named Ramshej. According to the Public Distribution System provided by the government, the villagers are entitled to receive a set amount of food grains a month, on that day, the villagers lined up in queues outside Devidas’s ration shop and were waiting for their welfare food. However, there was a part of people have had to go back with empty handed, because their fingerprints could not be recognized by the Aadhaar system, although they already assigned their identity in the Aadhaar, and there are many similar problems still existing, from software issues and connectivity problems to the fingerprint mismatch. Due to the connectivity is sparse in remote areas, it sometimes delays the villagers to access the national welfare, Aadhaar has made things tougher for the villagers instead of making things more convenient. The government lacks of the consideration about making internet infrastructures more sustainable and accessible to remote areas, the government should ensure the equitability of internet infrastructures and stand from public interest-oriented public/ private relations. Thus, it is not appropriate to apply Aadhaar in the Australian contextual environment due to Australia is a nation with a vast area and the characteristic of varying population density. It is hard to effectively identify and enroll those people who live in remote locations, and due to the instability of remote networks, the risk of delaying welfare to marginated people will be higher.

In conclusion, Aadhaar as an internet infrastructure is also a symbol of highly political technologies. Although they may appear invisible and efficient in people life, it is very necessary for the government to monitor the possible serious environmental and social consequences. The emergence of Internet infrastructure should play a role in serving public interests and not endanger the rights of vulnerable people.

Mathew, A. (28 January, 2018). Has Aadhaar Worked for Rural India? Bloomberg.  Retrieved from: https://www.bloombergquint.com/technology/has-aadhaar-worked-for-rural-india#gs.Dhirk_k

Rouse, M. (August, 2012). What is Aadhaar? What is.com. Retrieved from: https://whatis.techtarget.com/definition/Aadhaar

Image: Deccan Chronicle. (27 Oct, 2017). In these 3 simple steps, you can link your Aadhaar with SIM card. Retrieved from: https://www.deccanchronicle.com/business/economy/271017/in-these-3-simpler-steps-you-can-link-your-aadhaar-with-sim-card.html