In recent years online social news sharing has drastically changed the way we now come to receive, view and understand news and current affairs. Living the in “Age of The Algorithm” has entailed that our online spaces are inundated with all kinds of news media, and has seen our social media feeds become crafted to match our interests, preferences and Internet histories.

In other words, our experience of news is now personally curated thanks to the power of the almighty algorithm. Increasingly, news media companies with an online presence capitalise on the capture of our engagement habits, by analysing our virtual cookie crumbs, assisting them with content development (Cherubini and Nielsen, 2016, p. 8-10).

As these companies are aware that we are more likely to engage with content that appeals to us, data analytics is now starting to be used to drive content production to secure site traffic, page views and increase the likelihood of something getting ‘shared’ online.

If ‘news sharing is a deeply ingrained facet of news consumption … a cultural practice’ (Carlson, 2016, p. 918) which influences what we are exposed to and absorb about the world we live in, then we must critically consider the implications of this kind of practice in our lives.

Important questions emerge regarding our online news consumption. Questions such as who benefits most from news sharing? Are some disadvantaged by news sharing, and why? And what is at stake socially, politically and economically for ‘everyday’ users and large media corporations?

These are the questions we ought to be asking, if we want to be informed users of Internet and communication technologies.

What are the origins of social news sharing?

The act of news sharing itself is not a new form of social practice, as we’ve been news sharing with others long before the invention of the Internet (Carlson, 2016; Kalsnes and Larsson, 2018). Newspapers were once ‘rare, expensive items’ and it was common for people to take part in ‘copying and circulating news clippings’ (Carlson, 2016, p. 917); to literally spread the news to others.

Over the past fifteen years we have seen a ‘transformation of online political information distribution through the rise of social network sites’ (Beam, Hutchens & Hmielowski, 2015, p. 215), like Twitter and Facebook. With a plethora different news sources freely available online we have seen the continual decline in the sales of print newspapers. 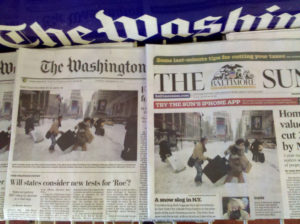 Newspapers once a rare commodity are now days in decline. Photo by Arian Ravan CC BY 2.0

For many of us, in developed Western liberal democracies, our lives are significantly shaped by our Internet engagement. This because the Internet is now an undeniable structuring force, and our virtual lives and lived realities are inseparable.

Social media’s capacity to fuse together both personal communication and widespread media communication has seen that it has ‘quickly evolved from a peripheral activity to become hubs of media activity, transforming legacy media’ (Carlson, 2016, p. 921). Print media, such as major newspaper outlets, have had no other choice than to establish an online presence in order to keep up with communicative advancements.

Through its new transmission online, and the sharing of news now a commonplace practice it means that the shape of news itself is changing. As Carlson (2016) argues that ‘the circulation of news through social media affects the establishment of meaning around news texts’ (p. 916).

Carlson (2016) goes on to suggest that when we share something online, we are also taking part in ‘interpretive actions that shift the context of news consumption … to re-embed news stories in new webs of meaning’ (p. 916, emphasis added). It is interpretive because when we share something, we are interpreting a specific piece of news as something worthy of others’ attention. That the ideas presented in a certain piece are of some value, whether that be to express how one feels about an event or to facilitate online discussion. 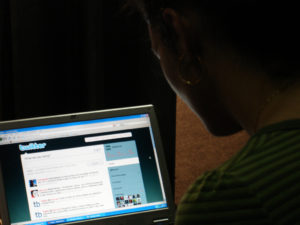 Sharing news online has become a common practice. Photo by WikiBrasil CC BY 2.0

If social media usage and online news sharing are key practices within our online media landscape then we need to start thinking about what are the implications of its use.

Who benefits from the transformative effects of social news sharing?

Everyday users
Through the social sharing of news online we are constantly being exposed to different kinds of news and information. Whilst our views may not align with those in our friends or followers lists, we are nonetheless being exposed to a variety of world views and opinions that exist in our social worlds.

We get to learn about others and their social and political views through the things they share, and hence we are not only being exposed to different forms of news information, we too are learning about others, and their identities, through what it is they share.

As well as learning about our current friends and followers, we are also able to establish social networks built around the practice of news sharing. For example a large part online engagement on Twitter is the spreading, sharing and commenting on news and current events occurring at a local, national and international level.

For those who once before could not afford to consistently purchase printed news media, the Internet now ‘allows access to a large amount of valuable political information at a low cost’ (Bimber 2001 as cited by Choi, Lee & Metzgar, 2017, p. 26).

Being able to now share news online is ‘likely to motivate citizens to participate in politics thanks to its ability to further lower the costs involved in information acquisition’ (Choi et al., 2017, p. 26). Hence everyday ‘empowered non-elite users’ have the possibility to now ‘share and discuss political information’ (Beam et al., 2015, p. 215).

Digital publishers and media companies
Digital publisher benefit greatly from our news sharing online, as we are effectively doing part of their work for them. We are spreading their content, allowing for it to be promoted and seen by others, in turn ‘driving valuable traffic for media companies’ (Kalsnes & Larsson, 2018, p. 1684).

The more we share news online, and the more clicks media companies get the more revenue they earn through the advertisements on their pages (Carlson, 2016). 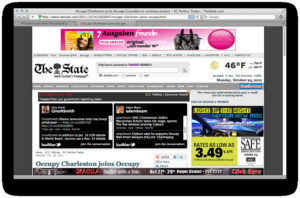 ‘The State’ news site homepage with advertisements. Photo by Charleston’s The Digital CC BY 2.0

Digital publishers have strategically created ‘an infrastructure of prominently featured news sharing tools in the hopes of extending the reach of any given story … to attract attention’ which then gets transformed into economic benefits (Carlson, 2016, p. 918).

Not only do their earn revenue through the sharing of, and user traffic, on their sites, they also are able to collect data about their audiences which can then be used to develop future content that is likely to succeed. Hence ‘analytics represent a significant improvement in news’ organisations capacity to understand the media environment in which they operate’ (Cherubini and Nielsen, 2016, p. 10).

Collecting audience data is especially useful for smaller startup media companies as it shows not only what their audience like, but also the location of their audience, what device people are using and how users are finding their content (Cherubini and Nielsen, 2016). Having this information about audiences means that content can be produced with aims of establishing a loyal audience base who will repeatedly view their content.

Who is disadvantaged by social news sharing?

Everyday Users
At face value it may not seem as though the simple act of sharing news has much effect on our lives, if any at all. However, a study has found that ‘social media news exposure affects political engagement and attitudes’ (Beam et al., 2015, p. 216).

This is significant because it demonstrates that we are shaped by our online engagements, and that we are not immune from the things presented to us, even though we often like to think that we are in control when it comes to technology’s power over us.

When we share something on our online profiles it then gets associated with us as users, and that data is then often gathered by social media platforms, like Facebook, to build a profile of who we are, what we like and where our interests lie.

It is easy to see that if social media companies are surveilling our online activity and gathering our data for their own economic and/or political benefit that catastrophic things can happen.

We only need look at the example of the 2016 U.S. presidential election and the Cambridge Analytica scandal to see the power of data collection and analytics.

The Cambridge Analytica scandal is among many where corporations are using our data for political or economic gains. This raises important concerns about our online privacy, and what is being done, by major corporations and those in political power, with our data.

If ‘news is being integrated into social media with the express purpose of further facilitating news sharing’ (Carlson, 2016, p. 918) then it begs the question of what are the true motivations behind what is getting produced online? And are political and/or economic interests always influencing content production?

If news is increasingly being produced and shaped by how popular it is, (i.e. how much it gets shared or ‘liked’) it also makes one question what goes left out or not reported on.

It is evident that online news sharing has both positive and negative proponents. As it is not something that appears to be going away anytime soon, it is important that we, as everyday users, remain critical of digital publishers and their intentions.

However this may present as a challenge for everyday users, as it may be hard for some to distinguish what has been produced for the sake of generating revenue or the propagation of certain views.

Samois, Z. (2018, August 17). ABCs: Newspaper circulation suffers across the board as large as 16%. [Web log post]. Retrieved from https://mumbrella.com.au/abcs-newspaper-circulation-suffers-across-the-board-with-falls-as-large-as-16-535665

Trivedi, Y. (2016, September 28). What are computer algorithms, and how do they work? [Web log post]. Retrieved from https://www.howtogeek.com/howto/44052/htg-explains-what-are-computer-algorithms-and-how-do-they-work/

About Amanda Campbell 4 Articles
Final year Gender and Cultural studies student. Owns too many books, drinks too much tea.