In today’s day and age, technology surrounds us and plays a major influential role in our individual lives and society. There is a continuous stream of technological advances and innovations, constantly changing and shaping our ideas and perceptions of the world. Augmented reality (AR), however, takes this to an entirely new level…

“What we see will not be what we want to see for ourselves, but what the machines and those who have paid for the services of those machines want us to see” (Pesce, 2017: 76).

In other words, large companies adopting augmented reality features, such as Facebook, Google, and Apple, will begin to have an even more powerful control on our views than they already do. 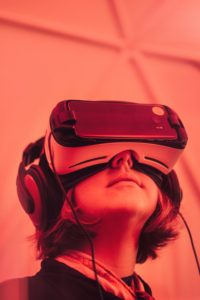 Photo by Samuel Zeller on Unsplash, free for commercial and noncommercial use

Contrary to popular belief, augmented reality technology has been around for the past 50+ years. What generally began as a tool and platform for flight simulations to help jet pilots practice decision-making under pressure (Pesce, 2017) is now evolving into numerous different applications, including education, gaming, art, tourism, etc. (Lemley & Volokh, 2018).

Augmented reality is astonishing. It’s exciting. However, we must proceed with caution. Similar to any new innovation, there are key social, economic, and political implications we must carefully consider in order to prevent harmful consequences for individuals and society as a whole.

What is Augmented Reality?

AR can exist in the form of wearable components, such as eyewear or head mounts, or it can be applied to existing technologies like computers, tablets, or smartphones (Antonioli et al., 2014). Through a process called “registration,” AR systems track the user’s position and orientation so the overlaid material will align with their view (Feiner, 2002).

Why may augmented reality be more culturally relevant and important for our future than virtual reality? What may this future look like?

Augmented reality is not as new as many assume…

1960s: Augmented reality was first developed by Ivan Sutherland and his students at Harvard University and University of Utah.

1970s & 80s: Researchers at institutions, such as the US Air Force’s Armstrong Laboratory, conducted studies on this technology, which was initially explored for flight simulations.

1990s: The term “augmented reality” was coined by scientists at Boeing. Since then, research and innovation has increased due to decreases in hardware costs, making lab equipment more affordable (Feiner, 2002).

Initially, this technology seemed to require special eyewear. However, today, all you really need to enter this transformative world is to look through the screen of your phone. For example, in July of 2016, the majority of the public had their first encounter with augmented reality with the popular smartphone gaming app, Pokémon GO (Pesce, 2017). 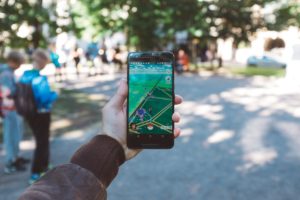 Photo by David Grandmougin on Unsplash, free for commercial and noncommercial use

Beyond gaming, there is a wide spectrum of current and/or future applications for AR, including but surely not limited to:

Augmented reality clearly has incredible potential for enhancing and even transforming many areas of our lives. While it is easy to get wrapped up in the excitement, we must also consider and critique the possible coinciding inequalities and consequences.

To overlay material, AR systems must continuously scan and watch our views, which can be a serious violation of privacy. For example, imagine a 3D video chat with your relatives or engaging in interactive pornography programs: is there a risk these intimate conversations and details could be recorded or exposed?

AR can involve avatars that we create and therefore control the appearance of. Similar to current issues with online profiles,  pseudonymity can often diminish social accountability and responsibility. Additionally, there may be a social pressure to take on dishonest or embellished personas we deem more profitable or acceptable in terms of race, gender, etc. (Lemley & Volokh, 2018). If so, this may be a setback for social diversity and acceptance.

This technology can be extremely distracting and dangerous; people can easily wander into unsafe areas. For example, there were multiple instances of Pokémon GO players wandering into ongoing traffic (Lemley & Volokh, 2018).

The companies employing this technology will benefit the most – Facebook, Google, Apple, and so on. AR requires a great deal of tracking, meaning this allows for constant surveillance and extremely profitable data collection.

Additionally, AR technologies will require resources and expenses, meaning one’s socioeconomic status will influence and even determine accessibility. For example, AR could be incredibly beneficial in a classroom setting. However, what about the schools, or even individual students, that cannot afford the additional costs? On a larger scale, this could perpetuate existing inequalities among different school systems (Antonioli et al., 2014).

“The very existence of VR and AR poses existing legal questions in new ways, ways that can illumine the assumptions the law makes about freedom and harm in the physical world as well as the virtual world” (Lemley & Volokh, 2018: 1138).

With new and blended boundaries of reality, there will be a serious amount of uncertainty in approaching and creating new policies and laws. Think human rights in a digital age and even pre-existing power inequalities in law-making and law-enforcement. Decisions will need to be made, and those in power (within politics & the tech industry) have the upper-hand…

“The global and distributed nature of digital media networks thus raises questions of ‘who has the authority and the ability to govern, and in response to what goals’” (Karppinen, 2017: 4).

The 2016 app Pokémon GO caused numerous disruptions; for example, various locations, such as hospitals and the Holocaust Museum, had to put up signs to inform gamers that there were no nearby Pokémons (Lemley & Volokh, 2018). How will we properly manage AR in legally, morally, and socially inappropriate places? Furthermore, who gets to decide which locations are inappropriate or not? Power relations are guaranteed to play a role, and there will be individuals and communities that may easily go unheard.

Personally, I have only had a handful of encounters with AR. These experiences were very brief and mainly involved iPhone apps such as Snapchat and Pokémon GO. When I came across these features, I wasn’t even aware they were a form of augmented reality, probably because I didn’t know what that was. And I’m sure I am not alone in this.

Although this technology is not new, it seems it is reaching the point where it is ready to truly enter and infiltrate our daily lives and society. I believe we are on the brink of witnessing a complete transformation of education, the workforce, interactions and relationships, public spaces, and so on.

As a student studying media and hoping to pursue videography, augmented reality will become incredibly relevant in my future career…

With that said, I am both intrigued and terrified of our future of mixed reality. I look forward to the interactive classrooms, the life-like simulations and communications, the new medium for art and storytelling. But I fear the exploited privacy and safety, the unequal accessibility, the conflicts that will arise when determining regulations and policies.

Technology and the few large companies that control the industry already have a hypnotising and unmistakable influence in our lives. I would argue our reality is already mixed; our boundaries are already blended. And as we move forward, this will only increase. The key is to avoid the blindness that may easily accompany the awe and excitement of innovation – we must stay critically aware of any and all consequential effects so we can deal with them head-on.

About Eliza Judson 3 Articles
Student from the states studying on exchange at University of Sydney for the semester.

Adhere to Aadhaar? Do YOU want Biometric Identification in Australia?

ARIN 2610 Net transformation Hypertextual Essay Question 1 internet innovation: Search Engines   DAI YIXIN (Yui) 09/10/2018   With the rapid development of the technologies, there are more and more internet innovations were created by […]