For those of us who have lived in Australia for the whole or majority of our adult lives, our internet is what we assume to be the internet. Our telcos, speeds, prices and coverage have become part of our everyday.

However, compared to the rest of the world, our internet is one of the most unregulated in the developed world.

Aside from our notoriously slow speeds ranking us #52 in the world (behind countries like Bulgaria and Barbados, according to Speedtest.net), Australia is a country which does not have net neutrality rules.

What is net neutrality?

Net neutrality is a principle of network design, where internet service providers (ISPs) treat all data equally, and do not discriminate on the basis of content, service, software, platform or any other factor. In basic terms, this means that telcos like Telstra and Optus would not be allowed to block, slow down or speed up certain content, but not others.

Because ISPs are responsible for giving end-users access to the internet, they possess almost complete control over how we experience it: including the websites and services available, speeds and prices.

A bit of history

The majority of the discussion surrounding net neutrality comes from the United States, and predates the internet. Over time, legal rules and frameworks have changed to include broadband and mobile providers.

Professor Tim Wu coined the phrase in his proposal for a neutral internet – sparking the conversation worldwide.

Australia does not have (and has never had) any rules governing net neutrality, unlike many other jurisdictions around the world.

The Australian Competition and Consumer Commission (ACCC) is responsible for governing the sector, and has explicitly advocated against such rules. Speaking with SBS News, an ACCC spokesperson said:

“If problems emerge, it is likely that we could deal with them under existing competition law without … ‘net neutrality’ regulations.”
(22 Dec 2017)

The ACCC can choose to invoke its powers under the Trade Practices Act 1974 (Cth) in preventing ISPs with a ‘substantial degree of market power … from misusing that power with the effect of substantially lessening competition’ (Part XIB).

Part XIC of the Act also allows the ACCC to order an ISP to provide service on ‘non-discriminatory terms and conditions in accordance with standard access obligations’.

All legal jargon aside, this means that the ACCC has the power to stop ISPs from unfairly suppressing competition.

Australia also has a Universal Service Obligation (USO), administered by the Department of Communications. It ensures that ‘everyone has access to landline telephones and payphones regardless of where they live’.

Telstra, responsible for delivering the USO, must ensure that all Australians receive telephone service, including those with disabilities and special needs. The burden of losses incurred by Telstra when fulfilling these obligations are shared among other carriers.

In a way, this is a form of telecommunications neutrality legislation – ensuring equitable access. Importantly however, this does not cover internet services; even those delivered by telephone infrastructure (dialup and ADSL).

Which other countries have net neutrality? 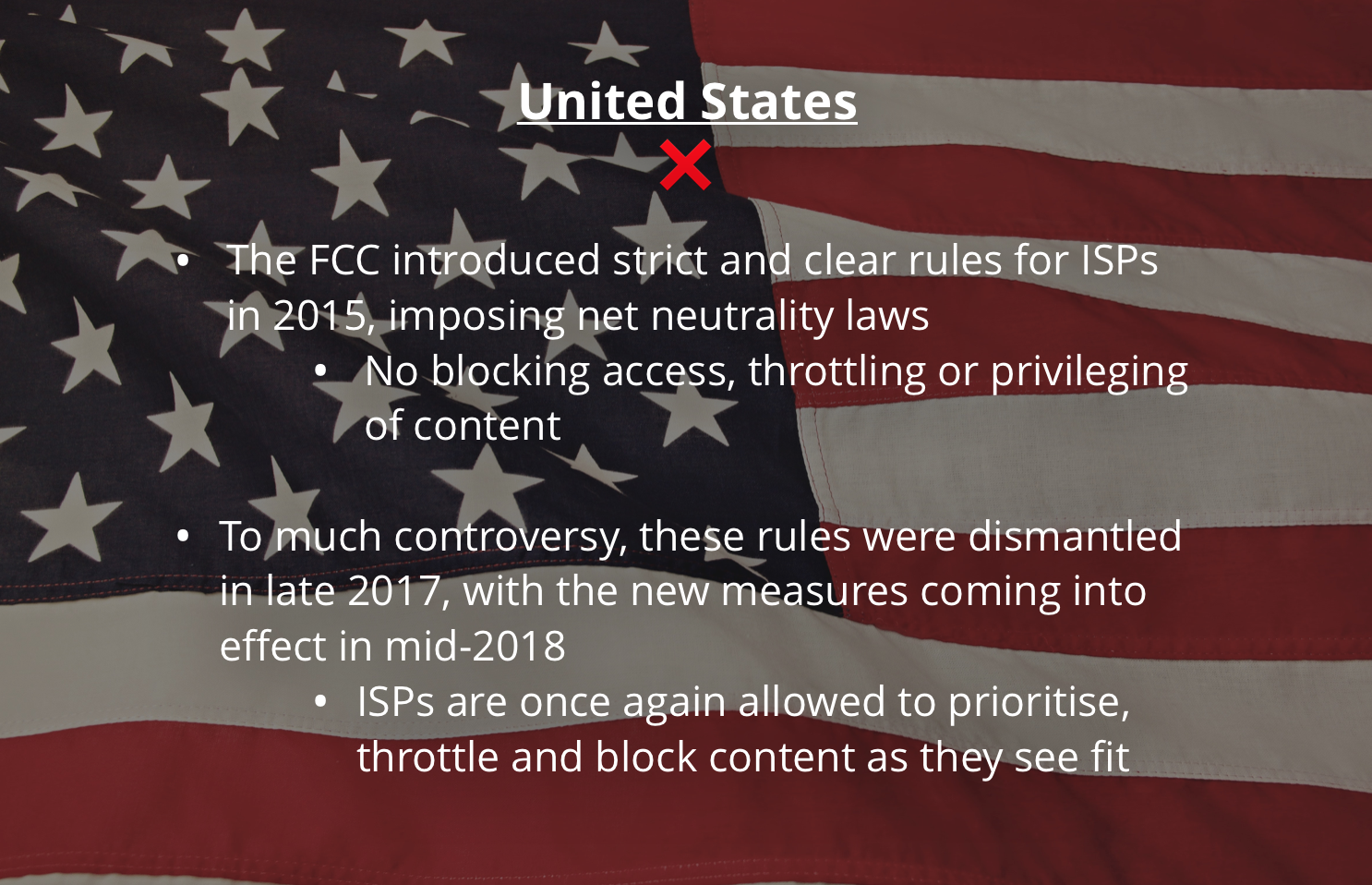 [A slideshow was intended to be embedded here. Due to ongoing issues with embedding HTML code in WordPress, please click here to view it in a new tab. Above is a still screenshot of one image from the slideshow as illustration. Image attributions and links are on the aforementioned slideshow link.]

The case for it

Many scholars and experts argue that net neutrality helps ensure that the internet remains a free and open platform that supports innovation, protecting consumer rights and freedom of expression.

Providers can violate net neutrality in many ways, most of which are the result of commercial agreements:

Such violations are not a distant concept. In 2012, US ISP AT&T blocked Apple FaceTime (Voice over IP) calls over its cellular network. As FaceTime calls are not made through the telephony network and billing system – and instead via a data connection at a much lower cost – it was in AT&T’s best monetary interests to disallow these calls.

The restriction was eventually lifted in 2013 after a ruling that it was against FCC net neutrality rules, which prevented “blocking applications that compete with voice or video telephony services”, despite arguing that the block was imposed for “reasonable network management” – an exception provided for by the FCC rules.

It’s clear that the crux of the case for net neutrality is to foster and promote competition – particularly in areas where ISP competition is limited. While users in metropolitan areas often enjoy a wide range of providers to choose from, rural and remote residents may be forced to operate within the confines of a telecommunication monopoly.

“Without such protection for competition, ISPs could use their role as gatekeepers to reinforce their monopolies.”
– Dr Matthew Rimmer, Queensland University of Technology

As we will see however, the way that ISPs compete in Australia is very distinct to the US landscape.

Why it won’t work in Australia

Determining whether a country should or should not have net neutrality rules isn’t so black and white – whether such regulations are necessary depends on the organisational structure of how the internet is delivered to consumers. As articulated by De Nardis (2014), net neutrality is a “national or even regional issue, rather than a clear issue of global Internet governance”.

Without end users realising it, the way that Australian ISPs operate is relatively unique.

ISPs in the US typically install, maintain and connect network infrastructure to individual premises from end-to-end. In other words, they are highly vertically integrated. For instance, a single provider like Spectrum or Verizon would own, maintain and operate the physical poles and wires which deliver the internet to your home. This means that a provider decides who and how they will service particular regions.

This is especially problematic for rural customers, where most companies may decide that servicing such isolated areas is not cost-effective – leaving users to the whims of a single ISP.

Australia’s ADSL infrastructure, by contrast, is owned by Telstra or Optus – and is wholesale leased to other ISPs who do not own the physical network equipment. ISPs like Dodo, iPrimus and Internode, for example, merely ‘rent’ space on the pre-existing lines. This means there is much more competition in the market.

With the roll-out of the NBN, this structure of competition will only become stronger, as we shall see.

It is clear that providers in Australia are far less vertically-integrated than the near-monopoly providers of the US, giving consumers a greater choice of services and benefits. Despite the issues surrounding the rollout of Australia’s National Broadband Network (NBN), its business model not only facilitates, but necessitates competition.

As the NBN is a government-owned corporation, it is designed to be a monopoly wholesale broadband provider which installs and maintains the infrastructure necessary to connect homes to the internet. Individual commercial ISPs then contract with NBN to access the network and sell internet access to users.

According to the Australian Bureau of Statistics, there were 63 ISPs with more than 1,000 subscribers at the end of June 2017, as a result of this competitive structure.

This mechanism ensures that consumers are not limited to one choice of ISP based on their geographical location and coverage. Any user covered by the NBN’s infrastructure may choose between a variety of competing ISPs.

Australian telcos already compete with each other in ways that would violate theoretical net neutrality laws, like those in other jurisdictions.

The very nature of the NBN restricts ISPs from competing on the basis of coverage and superior infrastructure – as all providers share the same ‘poles and wires’. ISPs are also limited in using price as a competitive factor, as consistent rates are charged by NBN. As such, telcos look to other ways to differentiate themselves and compete in a free market.

A main way that Australian ISPs compete are through ‘unmetered’ agreements – where certain services and websites can be accessed without usage being counted towards monthly data limits. Each of the three main telcos have such arrangements, and serve as a key way that they compete against each other. Under net neutrality rules, such an approach would be illegal.

It’s important to note that other services without an agreement are not slowed down or blocked. One negative to this is that smaller services without the commercial agreements may suffer and fall victim to larger competitors, as subscribers choose services that do not count to their quotas. For instance, niche video service Crunchyroll does not have an agreement, while video-streaming leader Netflix has arrangements with both Optus and Vodafone.

If we, as Australian consumers, wish to reap the benefits of greater competition in the telecommunications marketplace, net neutrality is a principle which should not be adopted in Australia. Given our diversity in the way in which internet service is provided, offers and deals like the ones introduced by Telstra, Optus and Vodafone, form one of the main ways that they maintain competitiveness. Given the highly competitive ownership and operating structure of the NBN, net neutrality is becoming even less relevant in the Australian context.

Net neutrality rules in an Australian context would be far too overreaching and unnecessarily limit the extent to which ISPs can engage in healthy competition, which ultimately benefits the end-user. Any potential issues of data discrimination or blocking may be adequately and appropriately addressed under existing competition legal frameworks and the ACCC.

Body of European Regulators for Electronic Communications. (n.d.). All you need to know about Net Neutrality rules in the EU. Retrieved October 1, 2018 from https://berec.europa.eu/eng/netneutrality/

Brodkin, J. (2017). AT&T wants you to forget that it blocked FaceTime over cellular in 2012. Ars Technica. Retrieved October 1, 2018 from https://arstechnica.com/tech-policy/2017/12/att-says-it-never-blocked-apps-fails-to-mention-how-it-blocked-facetime/

I’m creating and sharing what I love!

YouTube is one of the most popular video sharing platform and the second most visited website worldwide(Bärtl, 2018). It has created the platform for people to share videos as user generated content to interact with […]

This response will explain the historical development of search engines, considering the transformative social, political, economic and cultural effects they have had. Halavais (2013, p. 5) defines search engines as “information retrieval” systems that provide […]